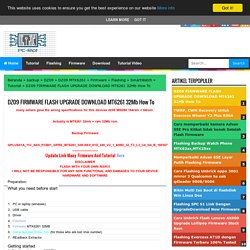 Backup Firmware Update Link Many Firmware And Tutorial Here What you need before start PC or laptop (windows)USB cableDriverFlashtoolFirmware MTK6261 32MBSerial Number Writer Tool (for those who are lost imei number)REadback Extractor Getting started. .onion hidden service urls list. Software-defined radio. Overview[edit] A basic SDR system may consist of a personal computer equipped with a sound card, or other analog-to-digital converter, preceded by some form of RF front end. 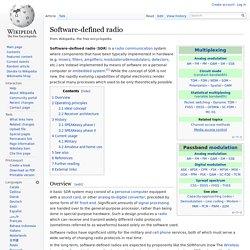 Significant amounts of signal processing are handed over to the general-purpose processor, rather than being done in special-purpose hardware. Such a design produces a radio which can receive and transmit widely different radio protocols (sometimes referred to as waveforms) based solely on the software used. Software radios have significant utility for the military and cell phone services, both of which must serve a wide variety of changing radio protocols in real time. In the long term, software-defined radios are expected by proponents like the SDRForum (now The Wireless Innovation Forum) to become the dominant technology in radio communications.

A software-defined radio can be flexible enough to avoid the "limited spectrum" assumptions of designers of previous kinds of radios, in one or more ways including:[2] The big GSM write-up – how to capture, analyze and crack GSM? – 1. So. 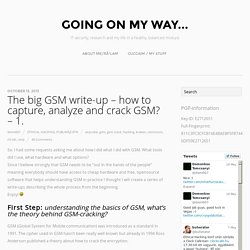 I had some requests asking me about how I did what I did with GSM. What tools did I use, what hardware and what options? Since I believe strongly that GSM needs to be “out in the hands of the people” meaning everybody should have access to cheap hardware and free, opensource software that helps understanding GSM in practice I thought I will create a series of write-ups describing the whole process from the beginning.

Enjoy! GSM (Global System for Mobile communication) was introduced as a standard in 1991. Later many people contributed to this theory essentially making GSM theoretically broken since 2003, but practical tools existed only for governmental organizations and mobile operators for such high prices nobody from the hacker community could buy them (not mentioning none of the manufacturers would have given him/her anything). So, the landscape of GSM hacking consists of two hardware options: USRP or OsmocomBB. Steps to crack GSM (originally outlined by Karsten Nohl):

How I cracked my neighbor’s WiFi password without breaking a sweat. Last week's feature explaining why passwords are under assault like never before touched a nerve with many Ars readers, and with good reason. 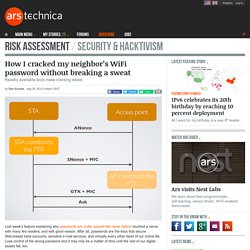 After all, passwords are the keys that secure Web-based bank accounts, sensitive e-mail services, and virtually every other facet of our online life. Lose control of the wrong password and it may only be a matter of time until the rest of our digital assets fall, too. Take, for example, the hundreds of millions of WiFi networks in use all over the world. If they're like the ones within range of my office, most of them are protected by the WiFi Protected Access or WiFi Protected Access 2 security protocols. In theory, these protections prevent hackers and other unauthorized people from accessing wireless networks or even viewing traffic sent over them, but only when end users choose strong passwords. First, the good news. That's not to say wireless password cracks can't be accomplished with ease, as I learned firsthand. A White Hat's Penetration Test. 1:20 am I sit down in front of my screen, with a fresh cup of coffee. 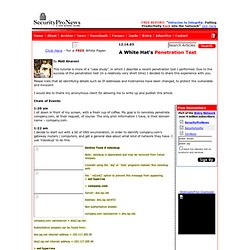 My goal is to remotely penetrate company.com, at their request, of course. The only prior information I have, is their domain name – company.com. 1:22 am I decide to start out with a bit of DNS enumeration, in order to identify company.com's gateway routers / computers, and get a general idea about what kind of network they have. I use 'nslookup' to do this. Gentoo Tools # nslookup Note: nslookup is deprecated and may be removed from future releases. Consider using the `dig' or `host' programs instead. The `-sil[ent]' option to prevent this message from appearing. > set type=ns > company.com Server: dns.isp.net.