The ultimate Growth Hacking platform for marketing automation - Anygrowth. SumoMe. The Ultimate Database of Growth Hacking and Marketing Tools. Growth Hacker Marketing: Ryan Holiday's book, re-released and expanded. The Follow Up Template That Turned 522 Emails Into $4 Million In Revenue. Last October, I was hired to help close a pipeline filled with the who's who of the Fortune 1000: Google, AT&T, Toyota, etc. 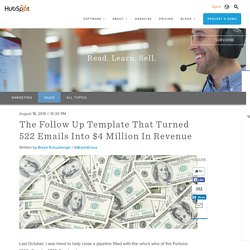 I was consulting with a software as a service (SaaS) firm. I’ll keep their name private to protect the innocent - we'll call them Culture Company. Culture Company had new software they wanted to pitch to go after all the big boys mentioned above. We built a list of 522 companies to work with. But ... they were really frustrated because they weren't closing sales. So, before following up with these 522 companies, we analyzed the different follow ups they were doing - and, by the way, I went into this deeper on a webinar here. Turns out they were following up at every stage of the process. For each stage, the reps were typically following up 2-4 times. To climb out of danger zone, they needed a better template for emailing their prospects.

Previously, Culture Company was sending out emails that looked similar to this horrible example I received recently - This is Why Slack Wins Its Users - Testlio. SaaS: Where To Find Your First 2,000 Beta Signups · Front. Today we’re sharing with you the different channels, communities and platforms we’ve used to get our first 2,000 beta signups. 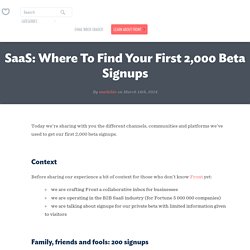 Context Before sharing our experience a bit of context for those who don’t know Front yet: we are crafting Front a collaborative inbox for businesseswe are operating in the B2B SaaS industry (for Fortune 5 000 000 companies)we are talking about signups for our private beta with limited information given to visitors Family, friends and fools: 200 signups Obviously the first thing we did, like a lot of startups, was to talk about our product to our network. . + points: easy to find / collect these usersthey can introduce you to extra users (indirect network) – point: they may be biased because they like you / want to help you (more than real users willing to pay for your solution) Betali.st ~ 400 signups Betali.st was our first try in terms of “beta users” communities. 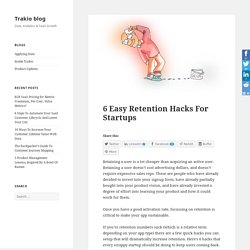 Retaining a user doesn’t cost advertising dollars, and doesn’t require expensive sales reps. These are people who have already decided to invest into your signup form, have already partially bought into your product vision, and have already invested a degree of effort into learning your product and how it could work for them. Once you have a good activation rate, focussing on retention is critical to make your app sustainable. If you’re retention numbers suck (which is a relative term depending on your app type) there are a few quick hacks you can setup that will dramatically increase retention. Here’s 6 hacks that every scrappy startup should be doing to keep users coming back. 1. Providing users an option to receive a weekly digest email is an awesome way to pull them back to your app. Essentially, a weekly digest is a summary of all the ‘best bits’ they missed. 2. 3. 4. 5. Adding loyalty programs can be hard. 6.

Despite $35 Million In Funding, Invision CEO Is Still A Lean Growth Hacker - Trakio blog. InVision is a prototyping and wireframing tool for designers and product guys to get quick, iterative feedback on products. 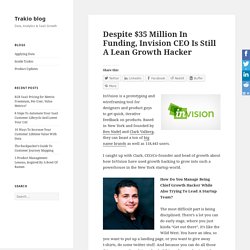 Based in New York and founded by Ben Nadel and Clark Valberg, they can boast a ton of big name brands as well as 118,443 users. I caught up with Clark, CEO/Co-founder and head of growth about how InVision have used growth hacking to grow into such a powerhouse in the New York startup world. How Do You Manage Being Chief Growth Hacker While Also Trying To Lead A Startup Team? The most difficult part is being disciplined. There’s a lot you can do early stage, where you just kinda “Get out there”, it’s like the Wild West. Yet for the main part, you’re going to be very emotional about what’s working and what’s not working.

So i would say the hardest part about being a founder and worrying about growth, is because you’re a founder you’re the kind of person who has a lot of ideas and a lot of anxiety to get those ideas launched as quickly as possible. . $2.6 million so far.