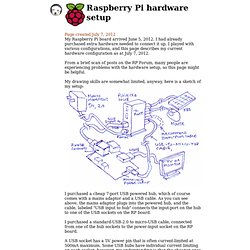 I had already purchased extra hardware needed to connect it up. I played with various configurations, and this page describes my current hardware configuration as at July 7, 2012. From a brief scan of posts on the RP Forum, many people are experiencing problems with the hardware setup, so this page might be helpful. My drawing skills are somewhat limited, anyway, here is a sketch of my setup: I purchased a cheap 7-port USB powered hub, which of course comes with a mains adaptor and a USB cable. I purchased a standard-USB-2.0 to micro-USB cable, connected from one of the hub sockets to the power-input socket on the RP board.

A USB socket has a 5V power pin that is often current-limited at 500mA maximum. The polyfuse problem However, even if each socket on the hub is current-limited to 500mA, the hub is also powering the RP board via the other cable -- into one of the standard-USB sockets. Finding the hardware Disclaimer. PARM pre alpha. Yes, the window frame message "-Press Ctrl+Alt to exit grap" shows . 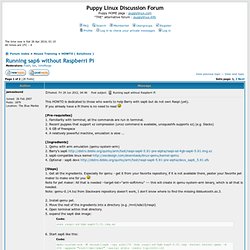 Did not see it first time probably a little due to a black theme i used that time . But it works : Simply press these two keys and release them and move the mouse . My dynamically build now also boots to desktop . It is really awfully and unusual for Puppy slow from mingetty login to Xorg-jwm . Another thing to consider : I have no possibility to modprobe any modules for the QEMUlated image . MODULE : version magic '3.1.9+ mod_unload modversions ARMv6 ' should be '3.1.9+ mod_unload ARMv6 ' So i thought Barry had blogged about recompiling the kernel so i fetched the 5.91 version from the nluug mirror , which also threw out these messages , even with modprobe -f , --force-vermagic , --force-modversion options . If i need the included kernel instead of "kernel-qemu" how do i get it using losetup --offset option ? Did not work for me . X100. Suptronics X100 is an expansion board that connects on top of the Raspberry Pi in order to add VGA output, RTC, four USB ports, a micro SD card slot, an RS232 DB9 connector, and an 8-channel servo port. 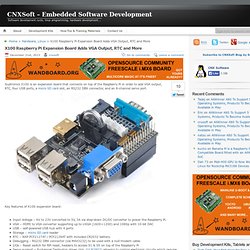 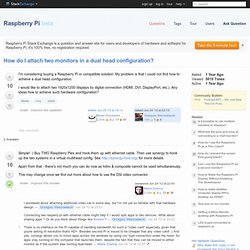 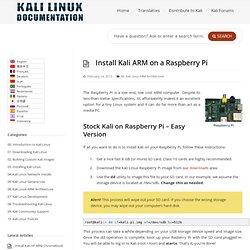 Despite its less-than-stellar specifications, its affordability makes it an excellent option for a tiny Linux system and it can do far more than act as a media PC. Stock Kali on Raspberry Pi – Easy Version If all you want to do is to install Kali on your Raspberry Pi, follow these instructions: Get a nice fast 8 GB (or more) SD card. Class 10 cards are highly recommended.Download the Kali Linux Raspberry Pi image from our downloads area.Use the dd utility to image this file to your SD card. Alert! Root@kali:~ dd if=kali-pi.img of=/dev/sdb bs=512k This process can take a while depending on your USB storage device speed and image size. IMPORTANT Please change your ssh host keys as soon as possible as ALL rpi images have the same keys.

Changing ssh host keys can be accomplished by doing the following: Grid. ZFS. I do a good bit of hardware integration with the web, with manufacturing equipment, with embedded systems and with big data set, or that can sustain multiple failures. 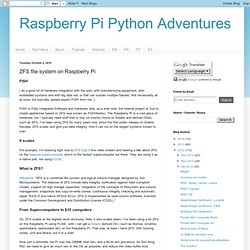 Not necessarily all at once, but typically, people expect FISH from me :) FISH is Fully Integrated Software and Hardware (btw, as a side note, the internal project at Sun to create appliances based on ZFS was known as FISHWorks). The Raspberry Pi is a cool piece of hardware, but I typically need stuff that is only (or mostly) found on Solaris and derived OSes, such as ZFS. I've been using ZFS for many years now, since the first public release on Solaris Nevada. ZFS scales and give you data integrity. It scales For example, I'm listening right now to ZFS Day's live video stream and hearing a talk about ZFS on the Sequoia supercomputer, which is the fastest supercomputer out there.