15 Questions to Ask During a Ruby Interview. Permanently remove files and folders from Git repo. Few weeks ago I froze gems on my blog project and ended up with a very big repository. 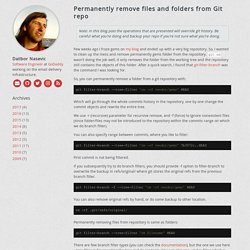 So, I wanted to clean up the mess and remove permanently gems folder from the repository. "git rm" isn't doing the job well, it only removes the folder from the working tree and the repository still contains the objects of this folder. After a quick search, I found that git-filter-branch was the command I was looking for. So, you can permanently remove a folder from a git repository with: Which will go through the whole commits history in the repository, one by one change the commit objects and rewrite the entire tree. Sublime Text 2 - Useful Shortcuts. Sublime Text 2 - Shortcuts (Verbose Mac) Cheat Sheet by gelicia - Cheatography.com: Cheat Sheets For Every Occasion. Setting up Sublime Text for Ruby development - Sublime Text 3 (ST3) is a lightweight, cross platform, blazing fast text editor with Chrome-like tabs and split window layouts. 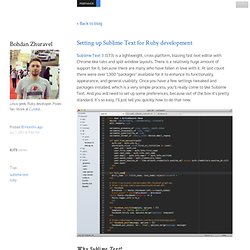 There is a relatively huge amount of support for it, because there are many who have fallen in love with it. At last count there were over 1,300 “packages” available for it to enhance its functionality, appearance, and general usability. Once you have a few settings tweaked and packages installed, which is a very simple process, you’ll really come to like Sublime Text. And you will need to set up some preferences, because out of the box it’s pretty standard. 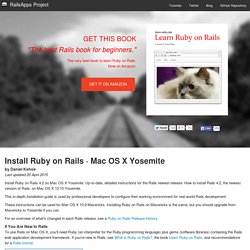 Up-to-date, detailed instructions for the Rails newest release. How to install Rails 4.2, the newest version of Rails, on Mac OS X 10.10 Yosemite. This in-depth installation guide is used by professional developers to configure their working environment for real-world Rails development. These instructions can be used for Mac OS X 10.9 Mavericks. Vim as your IDE. To follow this article the reader should at least have a basic idea of how to use Vim and its command modes. 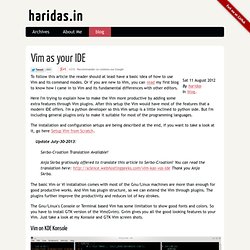 Or if you are new to Vim, you can read my first blog to know how I came in to Vim and its fundamental differences with other editors. Here I'm trying to explain how to make the Vim more productive by adding some extra features through Vim plugins. After this setup the Vim would have most of the features that a modern IDE offers. I'm a python developer so this Vim setup is a little inclined to python side.

But I'm including general plugins only to make it suitable for most of the programming languages. The installation and configuration setups are being described at the end, if you want to take a look at it, go here Setup Vim from Scratch. Cloud Application Platform. Collaborating with Others. Cli collaboration Table of Contents Adding collaborators Other developers (identified by email address) can be invited to collaborate on your app: heroku sharing:add joe@example.com Adding joe@example.com to myapp collaborators... done When you invite a collaborator, they’ll be sent an email to let them know they were granted access to the app. 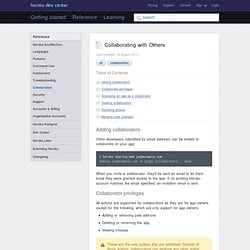 Collaborator privileges All actions are supported for collaborators as they are for app owners except for the following, which are only support for app owners: Adding or removing paid add-onsDeleting or renaming the appViewing invoices These are the only actions that are restricted. Accessing an app as a collaborator. Git cheat sheets. GettingStarted - appengine-jruby - Getting Started with JRuby on Google App Engine - Google App Engine API Wrappers and Tools for JRuby. / - appengine-jruby - Google App Engine API Wrappers and Tools for JRuby. Ruby on Rails Tutorial: Learn Rails by Example. Michael Hartl Contents Foreword My former company (CD Baby) was one of the first to loudly switch to Ruby on Rails, and then even more loudly switch back to PHP (Google me to read about the drama). 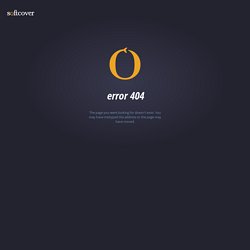 This book by Michael Hartl came so highly recommended that I had to try it, and the Ruby on Rails Tutorial is what I used to switch back to Rails again. Though I’ve worked my way through many Rails books, this is the one that finally made me “get” it. The linear narrative is such a great format. Enjoy! Derek Sivers (sivers.org) Founder, CD Baby Acknowledgments The Ruby on Rails Tutorial owes a lot to my previous Rails book, RailsSpace, and hence to my coauthor Aurelius Prochazka. 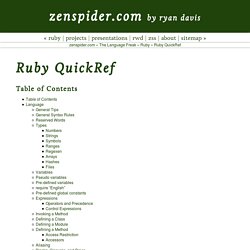 Use [] over Array.new. Blog of Ryan Bigg - Ubuntu, Ruby, RVM, Rails, and You. How To Configure Remote Access To Your Ubuntu Desktop. Version 1.0 Author: Falko Timme <ft [at] falkotimme [dot] com> Last edited 01/23/2008 This guide explains how you can enable a remote desktop on an Ubuntu desktop so that you can access and control it remotely. 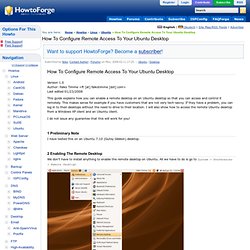 This makes sense for example if you have customers that are not very tech-savvy. If they have a problem, you can log in to their desktops without the need to drive to their location. I will also show how to access the remote Ubuntu desktop from a Windows XP client and an Ubuntu client.