How to make your first robot 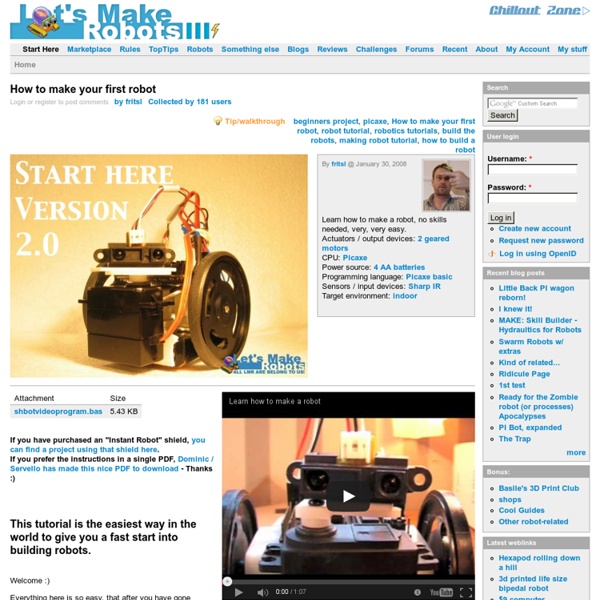 If you have purchased an "Instant Robot" shield, you can find a project using that shield here. If you prefer the instructions in a single PDF, Dominic / Servello has made this nice PDF to download - Thanks :) Welcome :) Everything here is so easy, that after you have gone through it, you can make a robot in a couple of hours. Why can't you do that now? Because there are so many little things you need to know. There are other "How to get started building robots" out there. All images in high-res here. Materials needed It used to be a hassle to buy the materials, because not one single webshop was carrying everything needed, and you had to buy from several shops. Good news is that Solarbotics now have made a kit for these instructions: Solarbotics shop (Webshop, located in Canada) - And if you buy it there, you even support hosting of letsmakerobots.com - because in order to be on the list above, the shops contacted us, and we made a deal :D (The following is all included in the bundle) Yes. main:

Materials You are visitor number since 09/02/03Copyright 2000-2002 by Frank J. Hoose, Jr. Home If you have not already done so, please read the Disclaimer (last updated 10/18/09) Cognitive Machines Group Speechome Recorder for the Study of Child Development Disorders Soroush Vosoughi, Matthew Goodwin and Deb Roy Collection and analysis of dense, longitudinal observational data of child behavior in natural, ecologically valid, non-laboratory settings holds significant benefits for advancing the understanding of autism and other developmental disorders. We have developed the Speechome Recorder, a portable version of the embedded audio/video recording technology originally developed for the Human Speechome Project, to facilitate swift, cost-effective deployment in special-needs clinics and homes. Recording child behavior daily in these settings will enable us to study developmental trajectories of autistic children from infancy through early childhood, as well as atypical dynamics of social interaction as they evolve on a day-to-day basis. Its portability makes possible potentially large-scale comparative study of developmental milestones in both neurotypical and autistic children.

PROJECTS Sew Electric Sew Electric is a book of hands-on LilyPad Arduino tutorials that bring together craft, electronics, and programming. The book walks you through the process of designing and making a series of quirky customizable projects including a sparkling bracelet, a glow in the dark bookmark, a fabric piano, and a monster that sings when you hold […] Circuit Stickers [Project] A-pod, an ant inspired hexapod - Trossen Robotics Community Hi all roboteers! Lately I've been working with a new hexapod. This is my third hexapod project. And this time I wanted to make something very different. Kintsugi: the art of repairing broken ceramics Did you know that in Japan, the act of repairing broken ceramics is an art form? The 16th century ‘Kintsugi’, or ‘Kintsukuroi’, is a repairing technique that celebrates the broken item’s rich history by decorating its cracks instead of hiding them. This is done by applying a mixture of urushi (lacquer resin), rice glue, and powdered gold, silver, or platinum. No two Kintsugi patterns are the same, with each golden stream’s path depending on the extent and pattern of the break.

Microsoft Robotics Studio and Lego Mindstorms NXT - Coding4Fun - Site Home - MSDN Blogs The Lego Mindstorms NXT kit is an amazing upgrade to the original Lego Mindstorms product. While the building blocks are not the traditional plastic stud blocks everyone is used to, the new construction parts allow for some very complex designs. Additionally, Microsoft Robotics Studio supports the Lego NXT kit right out of the box, so it's quite easy to get up and going using MSRS with the Lego kit to start coding a robot in C# or VB.NET. With that in mind, this article will demonstrate how to use MSRS with the simple TriBot robot that can be easily built using the instructions included in the Lego NXT kit. LegoNXT TriBot Building Overview Our mission is to help advance the state-of-the-art in autonomous robotics technologies. We believe that great advances in robotics will come from the open source robotics community. That is why we work hard to support and contribute to the open source robotics community. We're working on software from the lowest level with ROS (Robot Operating System) to the highest and in-between with our collection of ROS-enabled software packages. We're also helping application engineers understand camera, video, and 3D point cloud data with the OpenCV and Point Cloud Library (PCL) perception libraries. And we are working on making physics simulators for robotics better with Gazebo.

DIY « Filippa Malmegard The Internet of Skills I just watched the refreshing TED group talk on the notion of an Interspecies Internet featuring a hero of mine, Neil Gerschenfeld of MIT’s Center of Bits & Atoms, alongside animal cognition expert Diana Reiss, brilliant network guru and evangelist Vint Cerf and the more unlikely “geek band” member musician Peter Gabriel. Loved the idea […] My visit to ‘NYC Resistor’ – Cult hackspace in Brooklyn On my trip over to NYC this Feb I popped by cult Hackspace / Makerspace NYC Resistor in downtown Brooklyn. I’d met resident hackers Astrida & Kim at Maker Faire in September but not had chance to stop by the space. GitHub Says 'No Thanks' to Bots — Even if They're Nice Erik Michaels-Ober Photo: Ryan Resella When something called Imageoptimiser said it could improve Erik Michaels-Ober’s software on the GitHub code-sharing website last Sunday, Michaels-Ober wasn’t sure what to make of it. In fact, he was pretty certain that the request had come from an automated program — a bot.

How much material does the laser burn away? In 2008 I sought to try and quantify the kerf of our laser cutter, or how much material the laser cutter burns away when cutting specific materials. The idea behind providing this information is so you can make a more educated guess of what sizes to draw your shapes if you are needing a tolerance fit. This information is particularly relevant if you are creating inlays and slotting joints*.