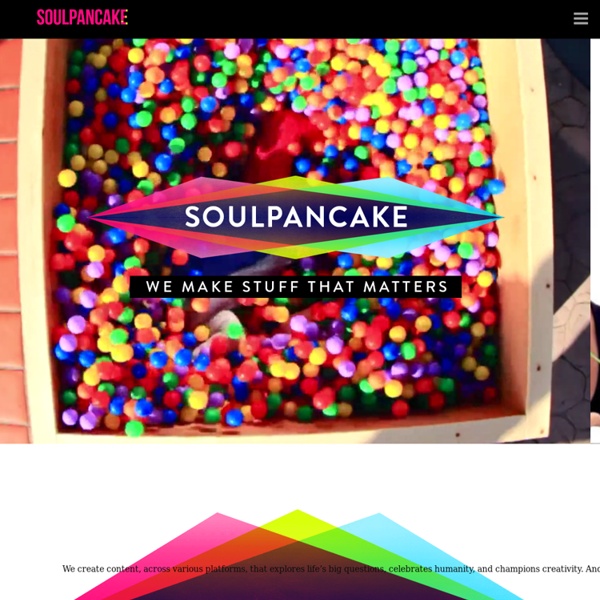 Stay in the loop: SoulPancake Our brain batter of art, culture, science, philosophy, spirituality and humor is designed to open your mind, challenge your friends, and feel damn good. SoulPancake hand–crafted in Los Angeles © 2014 SoulPancake LLC

Create a Q&A Website in a Snap with Qhub When your visitors or customers have questions, they typically contact you directly or ask their question(s) in your site forum—assuming you have one. In most situations, a forum isn’t available either. Qhub provides a fast way to setup a customizable Q&A website in a matter of minutes.

Hyperbole and a Half - Wikipedia Hyperbole and a Half draws inspiration from "rage comics," promoting a certain similarity in their shared diction and simple, almost rudimentary art.[8] A number of Brosh's images have, in turn, been repurposed into various memes and rage comic panels.[1] A popular image, taken from an entry where Brosh describes her frustration over her inability to maintain enthusiasm for daily responsibilities, shows Brosh excitedly exclaiming "CLEAN ALL THE THINGS!"[9] Personal life[edit] Brosh spent her early childhood in California before moving to rural Idaho at the age of 7.[10] She attended college at the University of Montana[11] after being recruited for track.[12] She graduated with a bachelor's degree in human biology.[13] Brosh owns two dogs, as well as several rats, who feature in her comics. In October 2010, Brosh moved to Bend, Oregon, because, in her words, "it is quite possibly the best place on earth and just breathing the air here is like huffing joy and celebration

Resources and Downloads for Teaching Critical Thinking Tips for downloading: PDF files can be viewed on a wide variety of platforms -- both as a browser plug-in or a stand-alone application -- with Adobe's free Acrobat Reader program. Click here to download the latest version of Adobe Reader. Click on any title link below to view or download that file. Resources On This Page: 5min - Find the best how to, instructional and DIY videos – Life Videopedia Up next 1:16 0:59 1:09 0:51 3:28 0:49 2:37 0:43 1:02 0:53 0:38 Caption Languages English Background Transparency

Darwin Awards - Wikipedia The project became more formalized with the creation of a website in 1993, and followed up by a series of books starting in 2000, authored by Wendy Northcutt. The criterion for the awards states, "In the spirit of Charles Darwin, the Darwin Awards commemorate individuals who protect our gene pool by making the ultimate sacrifice of their own lives. Darwin Award winners eliminate themselves in an extraordinarily idiotic manner, thereby improving our species' chances of long-term survival.

10 Life Lessons I Learned from Surviving My 20s On my 20th birthday, I got drunk and peed on some old ladies’ front lawn. A cop saw me and stopped me. Fortunately, I talked my way out of going to jail that night. 100 Amazing How-To Sites to Teach Yourself Anything Posted by Site Administrator in Online Learning May 7th, 2009 Learning new skills and expanding your knowledge doesn’t have to cost you an arm and a leg. There are loads of free resources on the Web that can help you find instructional videos, tutorials and classes to learn a wide variety of skills from fixing basic car problems to speaking another language. With 100 sites to choose from, you’re bound to find something here that will help you learn just about anything you could want. General Tutorials These sites offer a wide range of tutorials and videos.

Everything You Know About Clausewitz Is Wrong As Mark Twain reputedly quipped, it’s not so much what we know that gets us in trouble; it’s what we know that just ain’t so. How much of what we know about martial ventures is wrong? In the naval sphere, for instance, it’s common knowledge that Alfred Thayer Mahan instructs commanders never to divide the fleet. Except he doesn’t. Once upon a time, it turns out, historians took to quoting other historians quoting Mahan to that effect.

team building games, business games and activities for team building, training, management, motivation, kids activities and childrens party games. home » teambuilding/games » free team building games (1) listing of free team building games ideas, exercises and activities for employee motivation, training and development, children's games and party games These free team building activities, exercises and ideas are for building teams and teamwork, corporate employee motivation, personal development, ice-breakers, energisers, and more serious learning and personal development. Many of these exercises can also be adapted for young people and children. Want a Good Answer? Ask a Good Question First! If you spend any time programming, you’ll probably have come across the question and answer site Stack Overflow. The site allows anybody to post a question related to programing and receive answers from the community. And it has been hugely successful. According to Alexa, the site is the 3rd most popular Q&A site in the world and 79th most popular website overall. But this success has naturally led to a problem–the sheer number of questions and answers the site has to deal with.

Six-Word Memoirs - Wikipedia Six-Word Memoirs is a project founded by the U.S.-based online storytelling magazine Smith Magazine. Like that publication, Six-Word Memoirs seek to provide a platform for storytelling in all its forms. Wason selection task Each card has a number on one side, and a patch of color on the other. Which card(s) must be turned over to test the idea that if a card shows an even number on one face, then its opposite face is red? The Wason selection task (or four-card problem) is a logic puzzle devised by Peter Cathcart Wason in 1966.[1][2] It is one of the most famous tasks in the study of deductive reasoning.[3] An example of the puzzle is: You are shown a set of four cards placed on a table, each of which has a number on one side and a colored patch on the other side. The visible faces of the cards show 3, 8, red and brown.

Mohammed Assaf - Wikipedia Mohammad Assaf (Arabic: محمد عساف‎‎; born 1 September 1989)[2] is a Palestinian pop singer well known for being the winner of the second season of Arab Idol, broadcast by the MBC network. He was given the nickname Asaroukh ("The Rocket") by Lebanese singer and Arab Idol judge Ragheb Alama. In 2013, Assaf was named a goodwill ambassador for peace by The United Nations Relief and Works Agency for Palestine Refugees (UNRWA). He was also named ambassador of culture and arts by the Palestinian government and was offered a position with "diplomatic standing" by the Palestinian president Mahmood Abbas.[3] Assaf was acclaimed by the jury and the public. His voice and appearance have drawn comparisons to Egyptian singer Abdel Halim Hafez, which has garnered Assaf both fame and controversy.