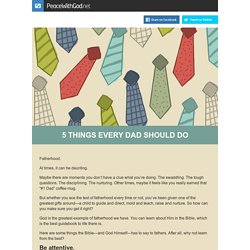 At times, it can be daunting. Maybe there are moments you don’t have a clue what you’re doing. The swaddling. The tough questions. Dad Was Killed In The Car Crash. Now Watch What This Cop Does To His 2-Year-Old Girl... When someone in uniform claims that they were just doing their job, it usually means they’ve actually done a whole lot more. 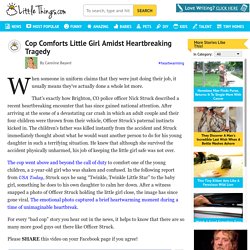 That’s exactly how Brighton, CO police officer Nick Struck described a recent heartbreaking encounter that has since gained national attention. After arriving at the scene of a devastating car crash in which an adult couple and their four children were thrown from their vehicle, Officer Struck’s paternal instincts kicked in. The children’s father was killed instantly from the accident and Struck immediately thought about what he would want another person to do for his young daughter in such a terrifying situation. He knew that although she survived the accident physically unharmed, his job of keeping the little girl safe was not over. Remembering Shawn Moore, 30 years later: When Livingston County lost its innocence. The camera records the dad and daughter. His wife is stunned. 97.3FM. Funk You. An Open Letter To My Best Friend's Mom. To my second mom, 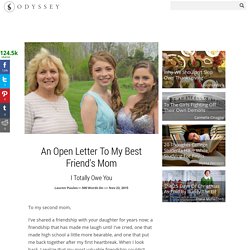 A Photographer Captured The Moment A Couple Met Their Adopted Baby For The First Time. Blind Mom Goes In For An Ultrasound, Now Watch What The Doctor Does. I’m Crying! The Father My Mother Was to Me  Father's Day. 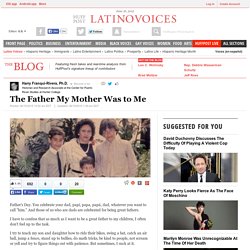 You celebrate your dad, papi, papa, papá, dad, whatever you want to call "him. " How not to be disappointed this Mother’s Day. I heard it all over Facebook and Twitter and in phone calls last year. 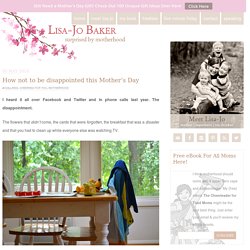 The disappointment. The flowers that didn’t come, the cards that were forgotten, the breakfast that was a disaster and that you had to clean up while everyone else was watching TV. The house that wasn’t quiet or clean or tidied up. The getting to sleep in that didn’t happen, the nap that evaporated into a toddler’s meltdown, the meal that someone else didn’t prepare.

A Quilt for Mother's Tears honors fallen police officers across the United States. On Sept. 20, 2013, Sheri Bradway had to start a journey no one wants to take. 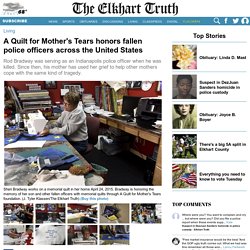 Her oldest son, Rod, a police officer in Indianapolis, was killed in the line of duty. Giving Your Children to God. At ages seven and five, my daughters Abby and Allyson were very particular about the way they looked–especially on Easter Sunday. 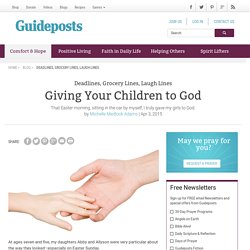 They each had very distinctive opinions about what was cool and what was not. Pretty much anything I liked fell into the latter category. 30+ {Busy} 1 Year Old Activities. Home Sanctuary: Mama, There is Hope. I love Downton Abbey. 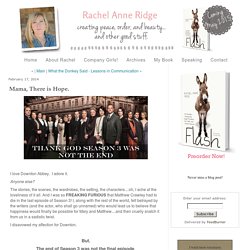 I adore it. Anyone else? The stories, the scenes, the wardrobes, the setting, the characters....oh, I ache at the loveliness of it all. Home Sanctuary: Dear Lonely Mom of Older Kids. Remember when it was easy to post photos of your adorable baby, or messy toddler on Facebook? 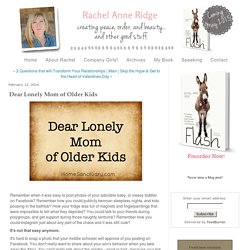 Why Moms Get 'Nothing' Done - Cute Video. I Don’t Like My Daughter’s Boyfriend! A Letter To My Children About Fifty Shades of Grey. 50 Dreams For Her Daughter With Down Syndrome. He Lost His Mother 26 Years Ago – Now He’s Reunited With The Woman He Missed The Most! Saroo Brierley was four years old when he was separated from his family. 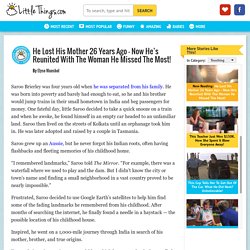 He was born into poverty and barely had enough to eat, so he and his brother would jump trains in their small hometown in India and beg passengers for money. One fateful day, little Saroo decided to take a quick snooze on a train and when he awoke, he found himself in an empty car headed to an unfamiliar land. Saroo then lived on the streets of Kolkata until an orphanage took him in. Motherhood Is the Strongest Bond. A few weeks ago, one of my dearest friends lost her 21-month-old daughter forever when the sweet baby girl died unexpectedly and suddenly.

My friend and I live on opposite sides of the country, so I took a trip to visit her for this past weekend. 2 Girls Learn They Are Going To Be Big Sisters In This Adorable Pregnancy Reveal - GodVine. 27 Adorable Animal Offsprings And Their Parents Will Melt Your Heart. Even in the often ruthless animal kingdom, there’s no force as strong as a parent’s love for their offspring.

Science separates our animal friends into two groups based their parenting skills: Category R animals favor quantity over quality, and have many offsprings that maturity faster, resulting in them having a smaller chance of survival. K category animals such as dogs, elephants, and humans, have fewer offsprings that take longer to reach adulthood. Their young require more care, the kind of care that you may recognize from your own experience as a child or a parent. Here are 27 animal parents whose love for their kids knows no boundaries – just like your love for yours. 8 Things I Didn't Know With My 1st Baby. What Every Parent Needs to Know About Secondary Drowning  What It Really Means To Be a Little Boy's Mama — Babble.