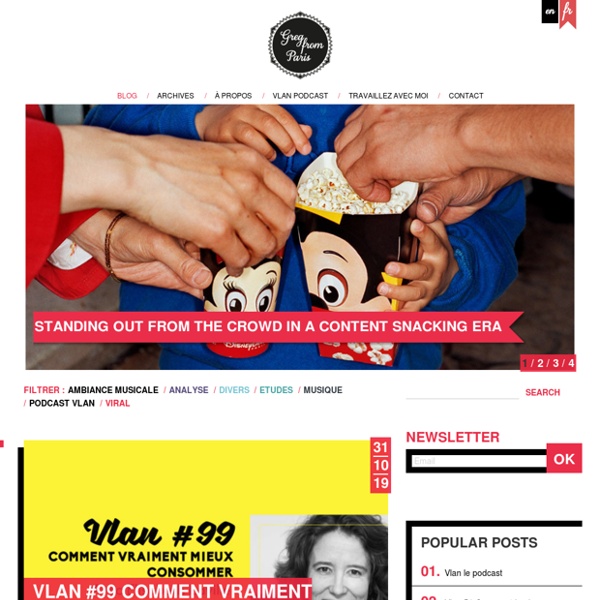 Defining Social Media ROI once and for all, and understanding th This post is the continuation of a discussion started on Marketing Profs’ LinkedIn group on July 7th. (If you don’t yet subscribe to the group, consider becoming a part of it.) Today’s video is actually two videos in one: The first half (Part 6 of our Social Media ROI series) deals with defining ROI once and for all. AT&T to Launch Groupon Competitor Add another big player to the list of Groupon competitors: AT&T. The telecom giant Monday began pre-registration to consumers in Los Angeles, Atlanta and Dallas-Fort Worth for a service via the company’s yp.com that will send daily deals to consumers. The company is offering $10 toward the first Deal of the Day for those who sign up through May 22. The service is expected to go live in a few weeks. Spokeswoman Dawn Benton says that initially the deals will be sent to users via email, but over time they will be broadcast to mobile phones as well. Benton says that the move is a “natural evolution” for AT&T.

The social side of strategy - McKinsey Quarterly - Strategy - Strategy in Practice In 2009, Wikimedia launched a special wiki—one dedicated to the organization’s own strategy. Over the next two years, more than 1,000 volunteers generated some 900 proposals for the company’s future direction and then categorized, rationalized, and formed task forces to elaborate on them. The result was a coherent strategic plan detailing a set of beliefs, priorities, and related commitments that together engendered among participants a deep sense of dedication to Wikimedia’s future. Through the launch of several special projects and the continued work of self-organizing teams dedicated to specific proposals, the vision laid out in the strategic plan is now unfolding. Thank You, Social Media! Life is astonishing. Be grateful for every tiny aspect of it! Social technologies and Web 2.0 applications change us more than we realize. Internet access, connectivity, and social media have changed the landscape of nearly everything we do.

Google Releases Instagram For YouTube Videos YouTube Capture for the iPhone and iPod touch is a free app that makes it fast and easy for users to shoot a video and share it with others. Ready to record as soon as you open it, the app lets you write a caption, select the social networks you want to share to, and set it to private, unlisted or public, with just a few taps. Hit ‘Share’ and the video can be uploaded to YouTube, Google+, Facebook and Twitter simultaneously, continuing in the background if you minimize the app. YouTube Capture will remind you to rotate your phone to a horizontal position to prevent you from filming in vertical, and you can add a number of enhancements like color correction and stabilization. You can also trim the length of your video and add free background music from YouTube.

How to write a corporate Twitter strategy (…and here’s one I mad (Cross-posted from the Cabinet Office digital engagement blog, with thanks for the guest spot.) You might think a 20-page strategy a bit over the top for a tool like Twitter. After all, microblogging is a low-barrier to entry, low-risk and low-resource channel relative to other corporate communications overheads like a blog or printed newsletter. And the pioneers in corporate use of Twitter by central government (see No 10, CLG and FCO) all started as low-profile experiments and grew organically into what they are today. But, having held back my JFDI inclinations long enough to sit down and write a proper plan for BIS‘s corporate Twitter account, I was surprised by just how much there is to say – and quite how worth saying it is, especially now the platform is more mature and less forgiving of mistakes.

How TV & The Web Are Merging: Al Jazeera's New Show, The Stream As television continues to adapt to the Web, expect to see new forms of content emerge that are a hybrid of traditional TV and the latest Web technologies. Last week, television news network Al Jazeera launched a new TV show and website. Called The Stream, it's an indication of where mainstream TV news is heading. The show uses social media curation service Storify - which opened up to the public today - to gather content and interact with the community.

7 Clever Email Campaigns That Get Customers Buying Again If you have a great product, customers will probably want to buy from you again. But that doesn't mean they'll always remember to. People are busy; no matter how much they love you, sometimes it's just hard to keep in touch, you know? Which is why email remarketing campaigns are great ideas for those who have purchased (or almost purchased) from you in the past! What's an email remarketing campaign, you ask?