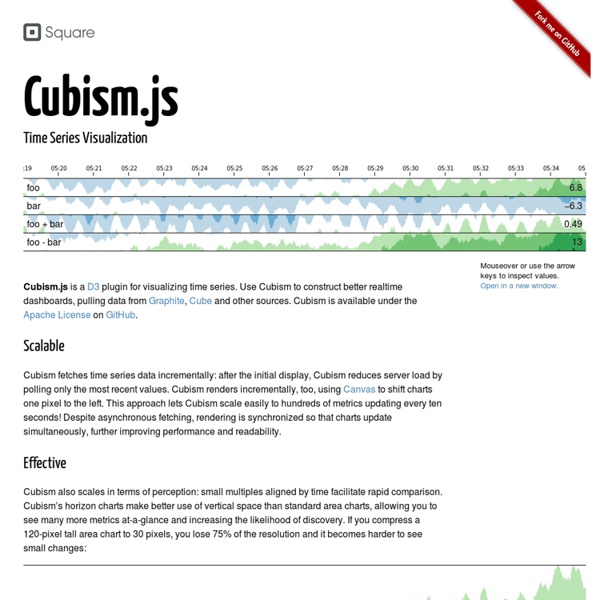 D3.js Draft Docs I'm annoyed at my options for version control. When I share a Google Doc, collaborators overwrite my master copy. It's insanely difficult to accept individual changes they've made. dygraphs JavaScript Visualization Library Dance.js VoiceXML Forum VoiceXML is the HTML of the voice web, the open standard markup language for voice applications. VoiceXML harnesses the massive web infrastructure developed for HTML to make it easy to create and deploy voice applications. Like HTML, VoiceXML has opened up huge business opportunities: the Economist even says that "VoiceXML could yet rescue telecoms carriers from their folly in stringing so much optical fibre around the world." VoiceXML 1.0 was published by the VoiceXML Forum, a consortium of over 500 companies, in March 2000.

arbor.js CSS Get the lowdown on the key pieces of Bootstrap's infrastructure, including our approach to better, faster, stronger web development. HTML5 doctype Bootstrap makes use of certain HTML elements and CSS properties that require the use of the HTML5 doctype. Include it at the beginning of all your projects. <!DOCTYPE html><html lang="en"> ... Leaflet In depth review of PhoneJS HTML5 JavaScript framework I recently discovered a framework I wanted to share with my readers, especially because it should appeal to every jQuery/jQuery Mobile developer. It’s called PhoneJS and it is developed by DevExpress. This company also has several other products in its lineup that could be of interest to you like ChartJS so feel free and look. This article will cover only PhoneJS and what it can do in the world of mobile development. Framework website: examples: Non-commercial use is free, commercial use is 199$ per developer per year Before we start let me tell you few words about PhoneJS .