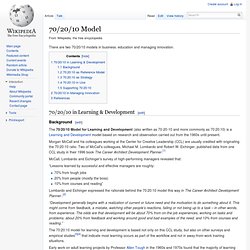 Morgan McCall and his colleagues working at the Center for Creative Leadership (CCL) are usually credited with originating the 70:20:10 ratio. Two of McCall's colleagues, Michael M. McCall, Lombardo and Eichinger's survey of high-performing managers revealed that: “Lessons learned by successful and effective managers are roughly: 70% from tough jobs20% from people (mostly the boss)10% from courses and reading” Learning Decays « Serious Play Conference. The Research The U.S. 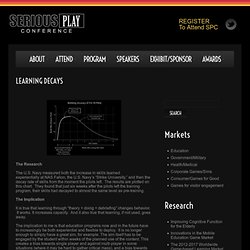 Navy measured both the increase in skills learned experientially at NAS Fallon, the U.S. Navy’s “Strike University,” and then the decay rate of skills from the moment the pilots left. The results are plotted on this chart. They found that just six weeks after the pilots left the training program, their skills had decayed to almost the same level as pre-training. The Implication It is true that learning through “theory + doing + debriefing” changes behavior. The implication to me is that education programs now and in the future have to increasingly be both experiential and flexible to deploy. Finally, it makes the case that education has to be refreshed in individuals. Coherent performance. I’ve been revisiting performance support in preparation for the Guild’s Performance Support Symposium next month, and I’m seeing a connection between two models that really excite me. 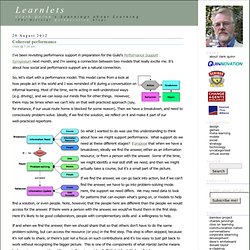 It’s about how social and performance support are a natural connection. So, let’s start with a performance model. This model came from a look at how people act in the world and I was reminded of it during a conversation on informal learning. Most of the time, we’re acting in well-understood ways (e.g. driving), and we can keep our minds free for other things. However, there may be times when we can’t rely on that well-practiced approach (say, for instance, if our usual route home is blocked for some reason). So what I wanted to do was use this understanding to think about how we might support performance. If we find the answer, we can go back into action, but if we can’t find the answer, we have to go into problem-solving mode. At the second step, if you get to problem-solving, this is collaboration. Performance Support Maturity (PSM): A Performance Support Rebirth by Frank Nguyen. “It will become increasingly important to be able to develop a cohesive strategy on how performance support integrates with your learning strategy and how it impacts business performance. 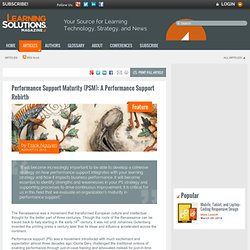 It will become essential to identify strengths and weaknesses in your PS strategy and supporting processes to drive continuous improvement. It is critical for us in this field that we evaluate an organization’s maturity in performance support.” The Renaissance was a movement that transformed European culture and intellectual thought for the better part of three centuries. Though the roots of the Renaissance can be traced back to Italy starting in the early 14th century, it was not until Johannes Gutenberg invented the printing press a century later that its ideas and influence accelerated across the continent. Performance support (PS) was a movement introduced with much excitement and expectation almost three decades ago.

“We're Lost, But We're Making Good Time”: Performance Support to the Rescue by Conrad Gottfredson & Bob Mosher. “An organization is competent to the degree it performs effectively at every changing moment. 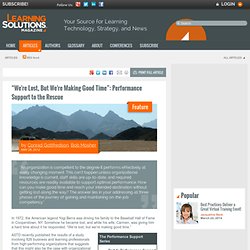 This can’t happen unless organizational knowledge is current, staff skills are up-to-date, and required resources are readily available to support optimal performance. How can you make good time and reach your intended destination without getting lost along the way? The answer lies in your addressing all three phases of the journey of gaining and maintaining on-the-job competency.” In 1972, the American legend Yogi Berra was driving his family to the Baseball Hall of Fame in Cooperstown, NY. Somehow he became lost, and while his wife, Carmen, was giving him a hard time about it he responded, “We’re lost, but we’re making good time.”

ASTD recently published the results of a study involving 826 business and learning professionals from high-performing organizations that suggests that this might also be the case with organizational learning and development. Figure 1: Learning to competency Reference. Vodcast: Learning Burst Series - The Three Stages of Performance Support.