What most elite athletes have in common. SportNZ BalenceIsBetter v01. ‘One of the worst things to happen to the game’: The toll year-round hockey takes on young athletes. Fourth in a five-part series. 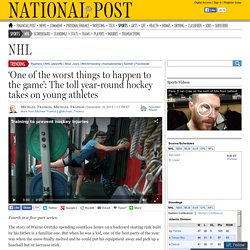 The story of Wayne Gretzky spending countless hours on a backyard skating rink built by his father is a familiar one. But when he was a kid, one of the best parts of the year was when the snow finally melted and he could put his equipment away and pick up a baseball bat or lacrosse stick. Part III: Raising the next great hockey star comes with a heavy price tag. Sports practice accounts for just one percent of the performance differences among elite athletes. Among elite athletes, practice accounts for a scant 1 percent of the difference in their performances -- and starting sports at an early age does not necessarily provide athletes an upper hand -- according to new research. 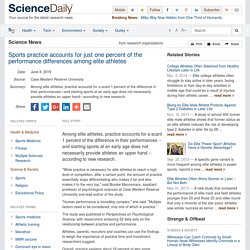 "While practice is necessary for elite athletes to reach a high level of competition, after a certain point, the amount of practice essentially stops differentiating who makes it far and who makes it to the very top," said Brooke Macnamara, assistant professor of psychological sciences at Case Western Reserve University and lead author of the study. "Human performance is incredibly complex," she said. "Multiple factors need to be considered, only one of which is practice.

" The study was published in Perspectives on Psychological Science, with researchers analyzing 52 data sets on the relationship between practice and performance. Want to be a sport star? Don’t specialise as a youngster. MANY parents who want their child to achieve sporting greatness adhere to a mantra popularised by the journalist Malcolm Gladwell: it takes 10,000 hours of training to become an expert in a certain field. 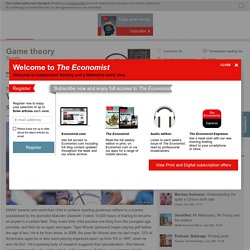 They make their child practise one thing from the youngest age possible, and then do so again and again. Tiger Woods (pictured) began playing golf before the age of two. He is far from alone. BLOG: Primal Passion - What our young athletes need to know! - ACHPER - The Australian Council for Health, Physical Education and Recreation Inc. 1st Jun 17 by Psychologist Gayelene Clews (Author “Wired to Play: The Metacognitive Athlete”) 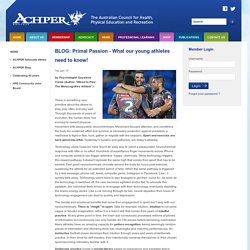 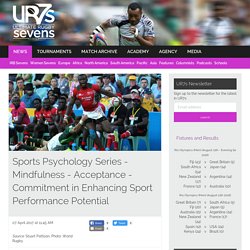 Here we stated that the most widely applied and less contemporary method for psychological skills training involves sport psychologists implementing programmes, around the control of internal processes, through means of developing traditional mental skills. The foundation in this approach is to create the Ideal Performance State through self-control of internal processes. Attention Training in Young Elite Athletes – Highlights from Recent Research. Author: Nancy Rebel, MLIS, SIRC In the arena of sport psychology, research around attention and its relationship to athletic performance has been around for a number of years. 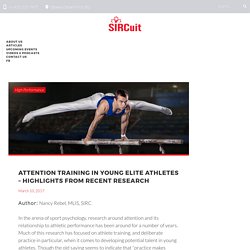 Much of this research has focused on athlete training, and deliberate practice in particular, when it comes to developing potential talent in young athletes. Though the old saying seems to indicate that “practice makes perfect”, researchers are quick to clarify that it is not the amount of time spent in practice that improves performance, but the amount of time spent in focused training that sees the best success through improvement. In other words, deliberate practice increases the potential for improved performance. In fact, “[d]eliberate practice is found to be the key factor in the work of developing expertise and focused attention is its essential element”1. Getting psyched for sport - Mental fitness strategies for the aspiring athlete. Author: Michelle Caron Mental fitness plays a large part in training and performance. 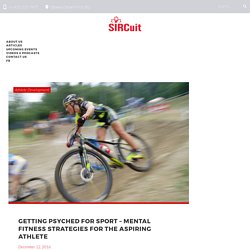 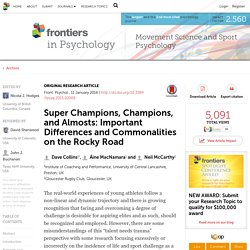 In contrast to the deliberate practice framework (Ericsson et al., 1993) that suggests expertise is a linear function of time spent in practice, successful athletes typically report a non-linear, complex, and individualized route to the top of their sport and must adapt to (anticipated and non-anticipated) developmental opportunities, set-backs and a range of transitions as they progress in their sport. Is swimming such an indecent obsession that the very best struggle in life?

Back from the edge: Michael Phelps. 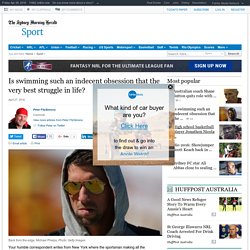 Photo: Getty Images Your humble correspondent writes from New York where the sportsman making all the headlines is the most successful Olympian of all time, with 11 – count 'em, ELEVEN – individual gold medals to his credit, Michael Phelps.The headlines are not because, with seemingly nothing else that commends itself to do with his life, he is just about on his way to selection for his fifth Olympic Games. Study highlights 'emotional labor' of college student-athletes. 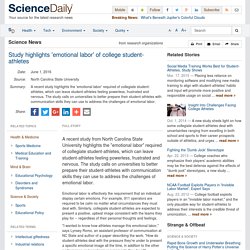 The study calls on universities to better prepare their student-athletes with communication skills they can use to address the challenges of emotional labor. Emotional labor is effectively the requirement that an individual display certain emotions. The Mindful Athlete: Can Preventative Mental Health Improve Performance, Too? Consider elite athletes. They are, in an incontrovertible and empirical sense, endowed—blessed with gifts that dwarf those of the rest of us, most obviously in the corporeal department: frames like buildings, ballistic arrays of muscle fiber, hand-eye coordination and balance and poise and power that sends fans into slack-jawed wonder and sportswriters deep, deep into the analogy pit in an attempt to dredge up something, anything, that can translate these outlying specimens into something closer to the rest of the species. Second to these physical strengths, but potentially far more important, is their mental fortitude.

The tennis player, the golfer, the free-throw taker or field-goal kicker or fustian batter with the bases loaded in the bottom of the ninth—all are under the kind of immense pressure from which our most precious natural resources are made, and those who transmute in the heat and weight are paid like the valuable commodity they are. High Performance. Jump to navigation Search form High Performance. Long-Term Athlete Development. Deliberate practice, rather than 10,000 hours, key to performance. A Review of Current Knowledge on the Development of the World’s Best Sporting Talent. 1.Baker J, Schorer J, Cobley S. Talent identification and development in sport: international perspectives.

London: Routledge; 2012.2.Ericsson KA. 4 Keys To Consistently Great Athletic Performances. I work with athletes at many levels of sport, from juniors to collegians to pros and Olympians, and a major goal that I help them to achieve is consistency in their competitive performances. I see so many athletes who have big swings in their performances from great one week to mediocre to even lousy the next week, with those ups and downs continuing, frustratingly, throughout the winter. Consistency is so important because it is one thing that separates the very best in every sport from the rest. Quality sleep helps fuel peak performance for teens - National Alliance for Youth Sports. For Parents Quality sleep helps fuel peak performance for teens Young athletes who aren’t getting enough sleep often face difficulties concentrating, focusing and learning.

Sport Pathways, Partnerships and Platforms. Sports Psychologists Train Olympians’ Parents to Stay Calm. So far, the most unexpected breakout stars of this year’s Olympics might just be U.S. gymnast Aly Raisman’s parents, who’d have a clear shot at gold if only nervous reactions were actually a sport. Watch for yourself if you haven’t already: They may not have their daughter’s gravity-defying skills, but the Raismans can grip each other’s arms, lean anxiously, and mutter under their breath like they’ve been training for it all their lives.

We're All In This Together. Game Plan: Know Your Strengths; Transferable Skills Outside of Sport. Canadian Sport Institute Pacific - As athletes you hone and master a number of skills to become successful in your sport. When it comes to life outside of sport, athletes have expressed concerns with feeling unprepared and inexperienced. Many, if not all, of the skills athlete acquire during their athletic career are transferable. Where those skills transfer is the athlete’s choice.