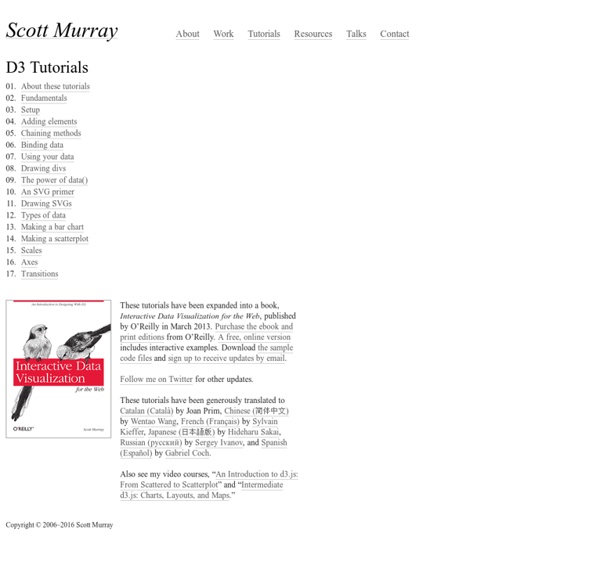 <div id="js_warning"><strong>JavaScript is turned off, so this page won&rsquo;t be very interactive.</strong> Switch JavaScript back on in your web browser for the full experience.</div> These tutorials have been expanded into a book, Interactive Data Visualization for the Web, published by O’Reilly in March 2013.

d3.js d3_tutorial/ Intro Data-Driven Documents, or D3 for short, is a new visualization library to build visualizations in SVG. But in my opinion, it's also the best javascript multipurpose SVG library when it comes to animation, interaction and above all for binding data to graphics. The community is very responsive, source code is very clean and the API is well written. There is not a lot of tutorials to learn D3 yet. But they are very good introductions and you can find plenty of examples packaged with the source code or hidden in forums. Simple example Let's start with a simple D3 example. D3 simple example: <! SVG circle with hovering: This is the SVG generated by the code from the above example: Why not just write this SVG fragment directly? Add, remove and modify multiple elements from an existing DOM Dynamically add attributes and styles according to a function Animate attributes and styles Bind data to automatically add elements when needed Benefits from a lot of helper functions Animating Binding data

Jerome Cukier D3.js - Data-Driven Documents TAGSExplorer: Interactively visualising Twitter conversations archived from a Google Spreadsheet MASHe Graphs can be a powerful way to represent relationships between data, but they are also a very abstract concept, which means that they run the danger of meaning something only to the creator of the graph. Often, simply showing the structure of the data says very little about what it actually means, even though it’s a perfectly accurate means of representing the data. Everything looks like a graph, but almost nothing should ever be drawn as one. Ben Fry in ‘Visualizing Data’ I got that quote from Dan Brickley’s post Linked Literature, Linked TV – Everything Looks like a Graph and like Dan I think Ben Fry has it spot on. When I started following Tony’s work on network analysis (here’s a starting point of posts), my immediate response was ‘Where’s Wally?’ As I start my exploration of tools like NodeXL it's very clear that being able to filter, probe and wander through the data provides far more insights to what’s going on. But what does this graph actually mean? *** TAGSExplorer ***

Health and Wealth of Nations - Cesium - WebGL Virtual Globe and Map Engine Alexander Wood and Ed Mackey from Analytical Graphics, Inc. developed an app that showcases the synergy between the powerful open source visualization frameworks, D3 and Cesium. This demo is the result of a one day hackathon hosted at Analytical Graphics, Inc in April of 2013. The app repurposed Mike Bostock’s D3 recreation of Hans Roslings’ “Health and Wealth of Nations” as an interactive overlay for a Cesium geospatial view. Geolocating each data point with its country of origin adds new context to the data. Hans Rosling’s original 2D visualization presents 4 dimensions of data, including income, population, and life expectancy for nations over the span of 200 years. From a technical standpoint, this application demonstrates usage of key concepts for Cesium and integration with D3 visualizations.

Flare | Data Visualization for the Web