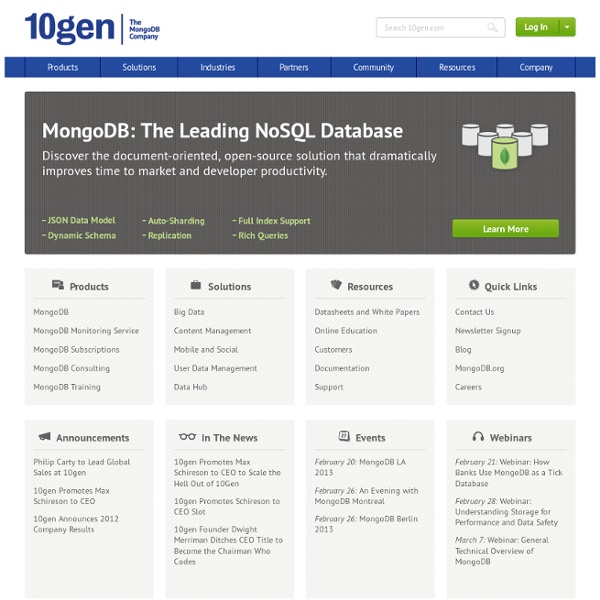 Kyoto Cabinet: a straightforward implementation of DBM Copyright (C) 2009-2012 FAL Labs Last Update: Fri, 04 Mar 2011 23:07:26 -0800 Overview Cassandra vs MongoDB vs CouchDB vs Redis vs Riak vs HBase comparison (Yes it's a long title, since people kept asking me to write about this and that too :) I do when it has a point.) While SQL databases are insanely useful tools, their monopoly in the last decades is coming to an end. And it's just time: I can't even count the things that were forced into relational databases, but never really fitted them. (That being said, relational databases will always be the best for the stuff that has relations.) But, the differences between NoSQL databases are much bigger than ever was between one SQL database and another.

NodeCellar: Sample Application with Backbone.js, Twitter Bootstrap, Node.js, Express, and MongoDB In my previous post, I shared my recent experience building a RESTful API with Node.js, MongoDB, and Express. In this post, I’m sharing the client application that uses that RESTful API. The Node Cellar application allows you to manage (retrieve, create, update, delete) the wines in a wine cellar database.

Add SPDY support to your Apache server with mod_spdy By Matthew Steele and Bryan McQuade, PageSpeed Insights Team At Google, we strive to make the whole web fast. Our work in this area includes PageSpeed, Google Chrome, and the SPDY protocol, among other efforts. In December of 2011, to make it easy for you to enable the SPDY (pronounced "SPeeDY") protocol on your sites, we released an early beta of mod_spdy, an Apache module that adds SPDY support to the Apache HTTPD server. We’ve spent the last few months working with our early adopters to fix bugs and tune performance of the module.

Connecting to a MongoDB database from R using Java It would be nice if there were an R package, along the lines of RMySQL, for MongoDB. For now there is not – so, how best to get data from a MongoDB database into R? One option is to retrieve JSON via the MongoDB REST interface and parse it using the rjson package. Assuming, for example, that you have retrieved your CiteULike collection in JSON format from this URL: - and saved it to a database named citeulike in a collection named articles, you can fetch the first 5 articles into R like so: NoSQL "Structured storage" redirects here. For the Microsoft technology also known as structured storage, see COM Structured Storage. A NoSQL (often interpreted as Not Only SQL[1][2]) database provides a mechanism for storage and retrieval of data that is modeled in means other than the tabular relations used in relational databases.

Backbone.js and Twitter Bootstrap Sample App Try It Enter a few characters in the Search Box in the upper right corner of the screen, and select an employee. In the Employee view, you can navigate up and down the Org Chart by clicking either the Manager link, or one of the Direct Reports in the sidebar on the right of the screen. WebSockets: Stable and Ready for Developers WebSockets are stable and ready for developers to start creating innovative applications and services. This tutorial provides a simple introduction to the W3C WebSocket API and its underlying WebSocket protocol. The updated Flipbook demo uses the latest version of the API and protocol. Working groups have made significant progress and the WebSocket API is a W3C Candidate Recommendation. Internet Explorer 10 implements this version of the spec.