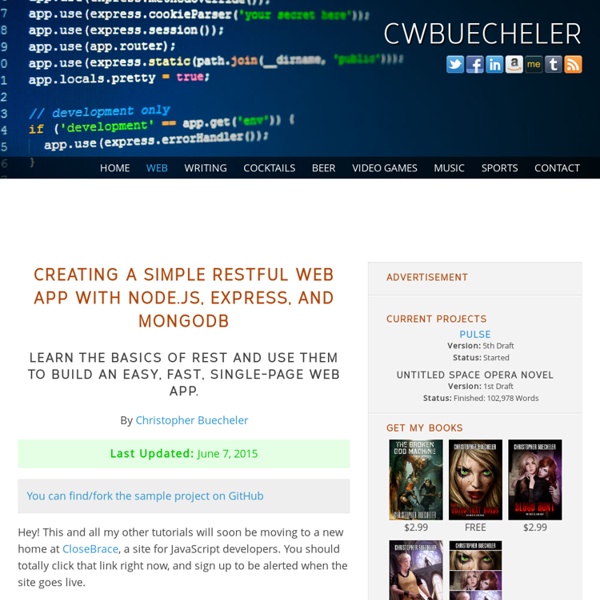 Authentication using Google’s oAuth api with node.js OAuth authentications are pretty popular now a days and another thing which is popular is JavaScript. This article shows how to plugin google’s oAuth api for authentication in your own node application. The github repo is also available. A background of oAuth OAuth is an authentication technique which provides you a secure and delegate access to some server resources on behalf of the resource owner. Why You Should Never Use MongoDB « Sarah Mei Disclaimer: I do not build database engines. I build web applications. I run 4-6 different projects every year, so I build a lot of web applications. Creating a Single Page Todo App with Node and Angular Free Course Getting Started with Angular 2 Angular 2 is the shiny new framework that comes with a lot of new concepts. Learn all the great new features. Updated April 12, 2016: Updating dependencies

3 Easy Steps to Get The Most from MongoDB and Node.JS MongoDB and Node.JS go together like good red wine and steak - that is to say, extremely well. This happy scenario owes to the fact that MongoDB and Node.JS are both built around JavaScript and JSON. MongoDB handles JavaScript natively - there is no impedence mismatch trying to shoe-horn objects into a relational model. Simply persist and query JSON. However, not everything is consistently rosy when using Node.JS and MongoDB together. There are caveats to be aware of.

Express - guide Getting started With node installed (download), get your first application started by creating a directory somewhere on your machine: $ mkdir hello-world In this same directory you'll be defining the application "package", which are no different than any other node package. You'll need a package.json file in the directory, with express defined as a dependency. You may use npm info express version to fetch the latest version, it's preferred that you do this instead of "3.x" below to prevent any future surprises. A Simple Website in Node.js with Express, Jade and Stylus Do you feel like you've missed the boat on Node? Perhaps you're not a superstar web app developer, but a humble builder of websites. Maybe you're a fledging front-end developer: you've got your head around JavaScript and you want to build a site yourself, but you don't know PHP, Python or Ruby. Fear not. This post will use the popular Express framework to show you how you can build simple websites in Node. If you're looking for real-time webapp action, then take your hipster boots and move along… this is a websites in Node 101.

Running Node.js apps in production Frederic Hemberger @fhemberger Topics I'll talk about today: Deployment Run Node.js (and keep it running) Metrics Deployment Deployment Different popular deployment techniques: Node Webkit powered Dashboard application In this post, we will be building a full fledged desktop application using node webkit and web technologies. We are going to build a dashboard app called myDashboard. The app will show the Weather report, Google Map, Flickr images and a Calendar. The final product would look like You can get the complete code here.

Why Use Node.js? A Comprehensive Introduction and Examples Introduction JavaScript’s rising popularity has brought with it a lot of changes, and the face of web development today is dramatically different. The things that we can do on the web nowadays with JavaScript running on the server, as well as in the browser, were hard to imagine just several years ago, or were encapsulated within sandboxed environments like Flash or Java Applets. Before digging into Node.js, you might want to read up on the benefits of using JavaScript across the stack which unifies the language and data format (JSON), allowing you to optimally reuse developer resources. How To Set Up a Node.js Application for Production on Ubuntu 14.04 Introduction Node.js is an open source Javascript runtime environment for easily building server-side and networking applications. The platform runs on Linux, OS X, FreeBSD, and Windows, and its applications are written in JavaScript. Node.js applications can be run at the command line but we will teach you how to run them as a service, so they will automatically restart on reboot or failure, so you can use them in a production environment. In this tutorial, we will cover setting up a production-ready Node.js environment that is composed of two Ubuntu 14.04 servers; one server will run Node.js applications managed by PM2, while the other will provide users with access to the application through an Nginx reverse proxy to the application server.