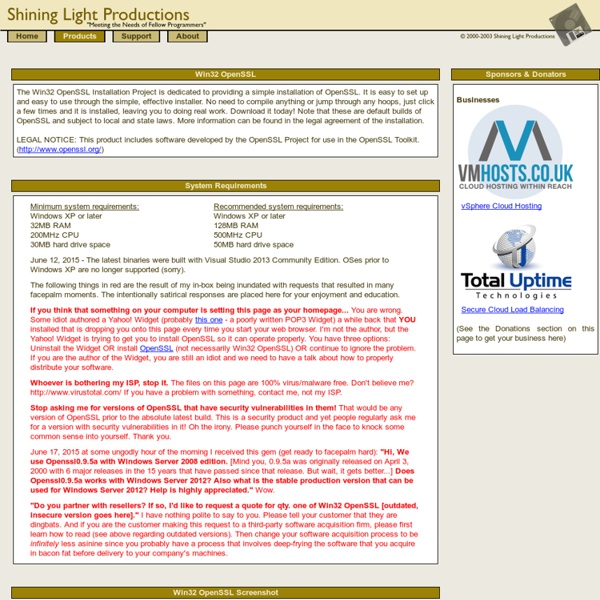 Shining Light Productions' Technical Support is highly acclaimed by many as the best in the software industry. The reason? You get to talk to the original/current developer of the product one-on-one...this means that there is no annoying third party using scripted responses. The downside is that, since you ARE e-mailing a real developer, you need to realize this and respect the developer, no matter what mood he/she is in. A developer's time is extremely valuable and a developer may not be in the most pleasant mood all the time. Bug Reports: To report a bug in the Win32 OpenSSL Installation Project, send an e-mail to Shining Light Productions describing your system setup, pertinent configuration information, what your intended goal is, and provide all related information (no matter how irrelevant it seems) to the bug. Feature Requests: To suggest a feature, send an e-mail to Shining Light Productions describing the feature in as much detail as possible. Related:  Node.Js Resources

Node Gyp cURL and libcurl ncb000gt/node.bcrypt.js Processing 1.0 (BETA) Breaking down app.js file - nodejs, express, mongoose A working draft of the app architecture is in progress, visit the boilerplate wiki Ok, this post is long overdue! tl;dr : This blog post explains how to structure and organize your node.js application. Its an anatomy of nodejs-express-demo app The demo app illustrates the following MVC architecture using expressCustom error handling in expressRouting in expressCRUD operations using mongoose ODMdbref and populate using mongoose ODMuse of flash variables (displaying messaages like "updated successfully" etc)dynamic helpersuser authentication using facebookvalidationsembedded documents in mongooseroute middlewares in expressusing of middlewares in mongoosedeployment on herokuManaging multiple environments (development, staging and production)and many more... A year back I started working on node.js and like always I started with a CRUD app. Also, being a rails developer, it was quite easy to think about the way your app has to be structured and organized. Modules used Anatomy of app.js file 2.

The Node Beginner Book » A comprehensive Node.js tutorial Essential Node.js patterns and snippets In this post, I take a look at the different patterns that you need to know when using Node.js. These came from my own coding and from a look at the code behind Tim Caswell’s flow control libraries. I think it is necessary to know how these basic patterns are implemented even if you use a library.. 1.1 Class pattern If the class is long, then instead of doing a single Class.prototype = {…} assignment, it may be split into multiple Class.prototype.method = function () {..} assignments. Reminder: Assign all your properties some value in your constructor. 1.2 Accessing global values from objects // constructorvar Class = function(global, value2) { this.global = global;}// access using this.global in class methods 1.3 Factory pattern // Constructorvar Class = function(value1, value2) { ... }// FactoryClass.factory(value1) { return new Class(value1, "aaa"); }// properties and methodsClass.prototype = { ... }; 1.4 Sharing state between modules 1.5 Singleton class (added Feb 2011) 2.1 Parsing GET 4.

express - MongoDB schema design for multible auth user accounts Nodejs Windows Setup · pcimino/nodejs-restify-mongodb Wiki Installing Python & C++ Libraries Apologies to Ubuntu & Mac users A user emailed me asking about some errors he got setting up this project. I realized that I forgot to document the requirements for Python and C++. $ sudo apt-get install libdevil1c2 libdevil-dev $ apt-file show libdevil1c2 Nodejs Nodejs is pretty easy to setup, simply download it and install it. Install Nodejs from here. Once done, you can verify by opening up a new command prompt and typing node --version, you should see the version number displayed. Python You will need Python 2.7.5 from here. C++ Libraries Some of the modules need to link to C++ libraries. Install the Node Modules If you already tried to install the modules and it failed, delete the ... ... Next, the Nodejs Server Setup Return Home