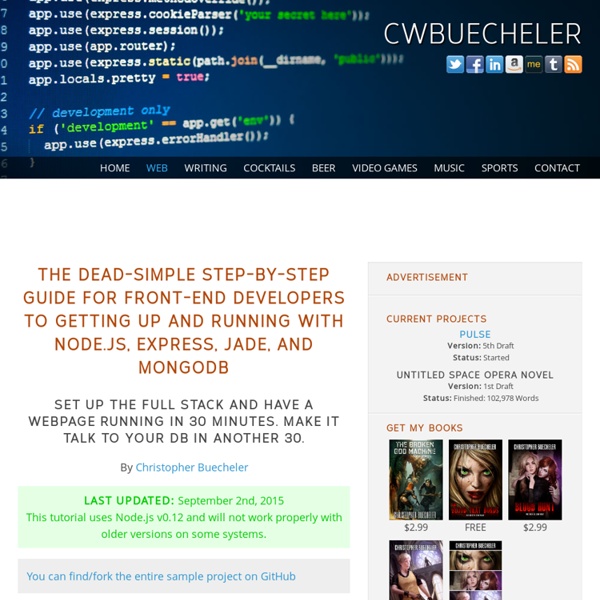 npm Documentation One of the key steps in becoming immersed in an ecosystem is learning its vocabulary. Node.js and npm have very specific definitions of packages and modules, which are easy to mix up. We'll discuss those definitions here, make them distinct, and explain why certain default files are named the way they are. A package is a file or directory that is described by a package.json. This can happen in a bunch of different ways! Authentication using Google’s oAuth api with node.js OAuth authentications are pretty popular now a days and another thing which is popular is JavaScript. This article shows how to plugin google’s oAuth api for authentication in your own node application. The github repo is also available. A background of oAuth OAuth is an authentication technique which provides you a secure and delegate access to some server resources on behalf of the resource owner. This is a very commonly used technique in third party websites to authenticate a user via his/her facebook, twitter or google account, without disclosing the password and also without taking the headache of storing user credentials in their websites.

RingoJS Before diving into Stick and the other awesome packages we just installed, I want to go through a short example with "raw Ringo". Just so you get a feel for what Ringo provides and the kind of error message you might get. If you are not familiar with exports and require(), better take a detour to the CommonJs Modules 101 explanation As a minimal starting point, consider the following web application: Express - api reference express() Create an express application. var express = require('express'); var app = express(); app.get('/', function(req, res){ res.send('hello world'); }); app.listen(3000); Application settings What are the best resources for learning Node.js What are the best resources for learning Node.js Two resources cover the two different sides to learning Node (and learning programming in general — Learn All the Nodes and Nodeschool’s Learn You Node Learn All the Nodes — Lecture 1–8 are remarkably comprehensive intuitive overview (start here: Learn All The Nodes) — you only need the free videos :) Video lectures that introduce the intuitions of servers and value of node

Express - guide Getting started With node installed (download), get your first application started by creating a directory somewhere on your machine: $ mkdir hello-world enginpost / node.js MySQL microsite example Sample abstract: This sample code demonstrates a few important node features: - How to setup a RESTful API using node.js express. - How to serve up static HTML via HTTP from a subfolder as the default URL root folder in your project. - How to connect to MySQL database and communicate via queries with that database. - How to send results from a MySQL query in the JSON format. - How to consume the RESTful API JSON results using jQuery in the static pages. To fiddle with this example, you will need: - A MySQL Server running with the ability to create a new DB and run a script to add content. - An understanding of basic SQL syntax (if you want to mess with the resultset). - Node.js up and running Note: You will use Apache to run phpMyAdmin for administration of your new MySQL database, but node.js will not use Apache to serve any pages. Once the example application is running, you should not need Apache running, but you will need MySQL up and running with your database.

undefined This is a first part of a series of posts that were inspired by the process of building stid.me blog. My actual blog (the one you are reading right now), is based on Express to manage basic routing, Poet that is a super-minimal blog solution for node, coffeescript for the javascript syntax, jade for html markup and stylus for css markup. Setup your Express app You first step is to to create a new Express app with stylus css support: History of Node.js on a Timeline We’ve been publishing articles on Node.js for over a year now, and since 2015 was quite a year for Node.js, we thought it’d be interesting to look back at what exactly happened to Node.js so far, from the point where it was born. This is the history of Node.js on a timeline, from 2009 until now (December 2015): Ghost: Blogging with Node.jsGhost is an open source publishing platform which is beautifully designed, easy to use, and free for everyone. The MEAN Stack: MongoDB, ExpressJS, AngularJS and Node.jsHow We Built eBay’s First Node.js ApplicationNode.js Memory Leak at WalmartEran Hammer of Wal-Mart labs came to the Node.js core team complaining of a memory leak he had been tracking down for months. PayPal releases Kraken, a Node.js framework"Gives your Node.js express apps some extra arms"Koa - Web framework for Node.js