Markdown quick reference. Markdown Syntax Documentation. Note: This document is itself written using Markdown; you can see the source for it by adding ‘.text’ to the URL. 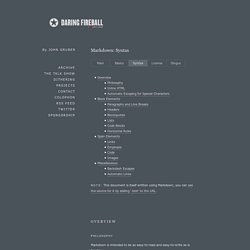 Overview Philosophy Markdown is intended to be as easy-to-read and easy-to-write as is feasible. Readability, however, is emphasized above all else. Bootstrap. Need reasons to love Bootstrap? 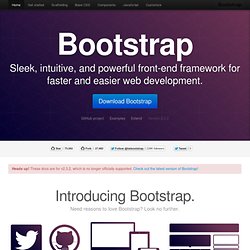 Look no further. By nerds, for nerds. Built at Twitter by @mdo and @fat, Bootstrap utilizes LESS CSS, is compiled via Node, and is managed through GitHub to help nerds do awesome stuff on the web. Made for everyone. Bootstrap was made to not only look and behave great in the latest desktop browsers (as well as IE7!) Template Designer Documentation — Jinja2 Documentation (2.8-dev) This document describes the syntax and semantics of the template engine and will be most useful as reference to those creating Jinja templates. 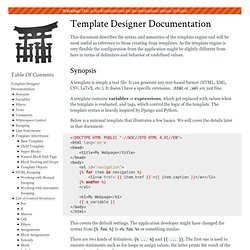 As the template engine is very flexible the configuration from the application might be slightly different from here in terms of delimiters and behavior of undefined values. Synopsis A template is simply a text file. It can generate any text-based format (HTML, XML, CSV, LaTeX, etc.). It doesn’t have a specific extension, .html or .xml are just fine. A template contains variables or expressions, which get replaced with values when the template is evaluated, and tags, which control the logic of the template. Mynt – static done simple. Quick Start: A Static Site with Bootstrap and Mynt – tummy.com, ltd.

By Sean Reifschneider Date February 13, 2013 We've recently rebuilt our site and after a lengthy review and selection process, I ended up going with the Mynt static site generator. 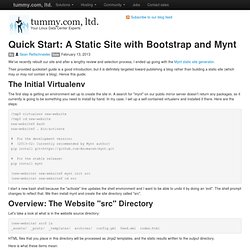 Their provided quickstart guide is a good introduction, but it is definitely targeted toward publishing a blog rather than building a static site (which may or may not contain a blog). Hence this guide. The Initial Virtualenv The first step is getting an environment set up to create the site in. Construire des services Web REST la Voie « Science education blog. Original: Roger L. 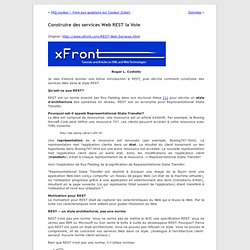 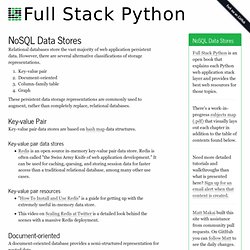 However, there are several alternative classifications of storage representations. Key-value pairDocument-orientedColumn-family tableGraph These persistent data storage representations are commonly used to augment, rather than completely replace, relational databases. Quokka CMS - The happiest CMS in the world. Build a Flask App in 30 Minutes. Flask is an awesome web framework for Python. 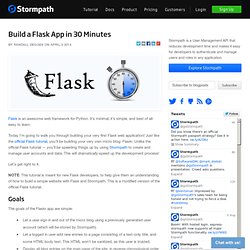 It’s minimal, it’s simple, and best of all: easy to learn. Today I’m going to walk you through building your very first Flask web application! Just like the official Flask tutorial, you’ll be building your very own micro blog: Flaskr. Unlike the official Flask tutorial — you’ll be speeding things up by using Stormpath to create and manage user accounts and data.

This will dramatically speed up the development process! Let’s get right to it. NOTE: This tutorial is meant for new Flask developers, to help give them an understanding of how to build a simple website with Flask and Stormpath. Goals The goals of the Flaskr app are simple: Nginx + uwsgi + flask on arch linux. Running (almost) anything on Nginx with uWSGI - metz·log. This is a sort of follow-up post to Running Trac on Nginx with Phusion Passenger. 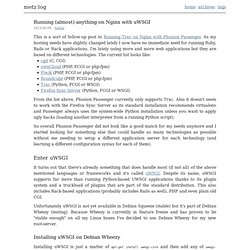 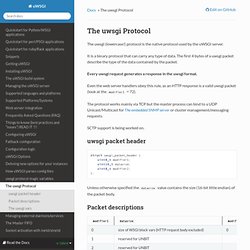 Protocol is the native protocol used by the uWSGI server. It is a binary protocol that can carry any type of data. The first 4 bytes of a uwsgi packet describe the type of the data contained by the packet. Flask - Full Stack Python. Gareth's Tech Blog: A basic web app using Flask and MongoDB. This tutorial will show you how to set up a very simple database web application using the micro-framework Flask. 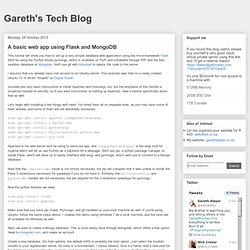 We'll be using the Python library pymongo, which is available on PyPI and installable through PIP, and the free sandbox database at Mongolab. We'll use git with bitbucket to deploy the code to the server. I assume that you already have root access to an Ubuntu server. This example was tried on a newly created Ubuntu 12.10 64-bit "Droplet" on Digital Ocean. Included are very basic instructions to install Apache2 and mod-wsgi, too, but the emphasis of this tutorial is simplicity instead of security, so if you want instructions on setting up Apache2, read a tutorial specifically about that as well. MongoDB Hosting: Database-as-a-Service by MongoLab. MongoDB University. Python and Flask Are Ridiculously Powerful. As a developer, I sometimes forget the power I wield.

It's easy to forget that, when something doesn't work the way I'd like, I have the power to change it. Yesterday, I was reminded of this fact as I finally got fed up with the way payments are processed for my book. After being unhappy with the three different digital-goods payment processors I've used since the book came out, I took two hours and wrote my own solution using Python and Flask. Login using python Flask with MongoDB and Blueprint. Developing RESTful Web APIs with Python, Flask and MongoDB.