MEAN vs LAMP Stack - Which is the Better Platform?

MEAN Stack vs LAMP Stack – In-depth Comparison. 9 reasons MEAN should power your next programming project. The transition from cutting-edge curiosity to practical workhorse is not one that many technologies make. 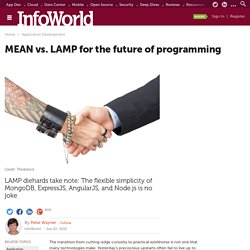 Yesterday’s precocious upstarts often fail to live up to their Version 0.1 promise -- not so for the technologies that make up the fiercely acronymized MEAN stack. It was only a few years ago that MongoDB, Express.js, AngularJS, and Node.js were raising eyebrows on their own. Now they’ve grown up and ganged up, and together they’re doing serious work, poaching no small number of developers from the vast LAMP camp. But how exactly does this newfangled MEAN thing stack up against LAMP? When is it better to choose the well-tested, mature LAMP over this upstart collection of JavaScript-centric technologies? The answer is when the simplicity and common structure make your life easier. The real explanation, however, is deeper.

MongoDB is built for the cloud MySQL's structure is confining (and overrated) MongoDB, on the other hand, offers a document structure that is far more flexible. What is the MEAN Stack and Why is it Better than LAMP? Developing a Web-driven application (either mobile or browser-based) typically requires the provisioning of some server-side infrastructure as well as the development of some code to run on it. 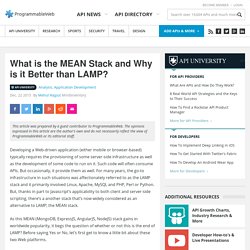 Such code will often consume APIs. But occasionally, it provide them as well. For many years, the go-to infrastructure in such situations was affectionately referred to as the LAMP stack and it primarily involved Linux, Apache, MySQL and PHP, Perl or Python. But, thanks in part to Javascript’s applicability to both client and server-side scripting, there’s a another stack that’s now widely considered as an alternative to LAMP; the MEAN stack. As this MEAN (MongoDB, ExpressJS, AngularJS, NodeJS) stack gains in worldwide popularity, it begs the question of whether or not this is the end of LAMP? LAMP (Linux, Apache, MySQL, PHP) Some Of The Key Variations: WAMP (Windows, Apache, MySQL, PHP): A Microsoft Windows OS (Operating System) equivalent that’s easy to get started with.

A Lean MEAN Substitute. MEAN Vs. LAMP: Finding the Right Fit For Your Next Project. LAMP Stack vs MEAN Stack vs Ruby on Rails - Course Report. Liz EgglestonLanguages You've heard the title "Full-Stack Developer," but what exactly should you learn to make the leap into web? 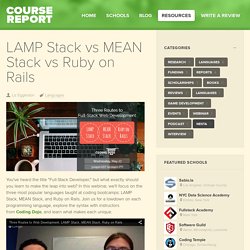 In this webinar, we'll focus on the three most popular languages taught at coding bootcamps: LAMP Stack, MEAN Stack, and Ruby on Rails. Join us for a lowdown on each programming language, explore the syntax with instructors from Coding Dojo, and learn what makes each unique. In this webinar, we cover: A quick & dirty intro to LAMP Stack, MEAN Stack, and Ruby on Rails Decode the acronyms you hear every day when researching programming languages Some insider tips to Plus, Speros & Lance answered plenty of questions about web development!

Mentioned in this webinar: Coding Dojo's algorithm practice: Student projects: SKU, a clothing ecommerce web app using PHP, Ajax, MySQL, jQuery, & Javascript.MAKE, a Ruby gem that shortcuts typing out forms and tables for SQL users.temetSleep, an app that connects to your FitBit and uses AngularJS and D3 for data visualization. 9 reasons MEAN should power your next programming project. MEAN vs LAMP. I apologize if you thought this was a post comparing two different web stacks. 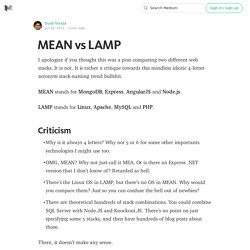 It is not. It is rather a critique towards this mindless idiotic 4-letter-acronym stack-naming trend bullshit. MEAN stands for MongoDB, Express, AngularJS and Node.js. LAMP stands for Linux, Apache, MySQL and PHP. Criticism Why is it always 4 letters? There, it doesn’t make any sense. Don’t get me wrong, if these acronyms are thought to represent some software that generates boilerplate code or bootstraps you for starting a project quickly, I’m down with that. Like the guys at mean.io did. So stop.