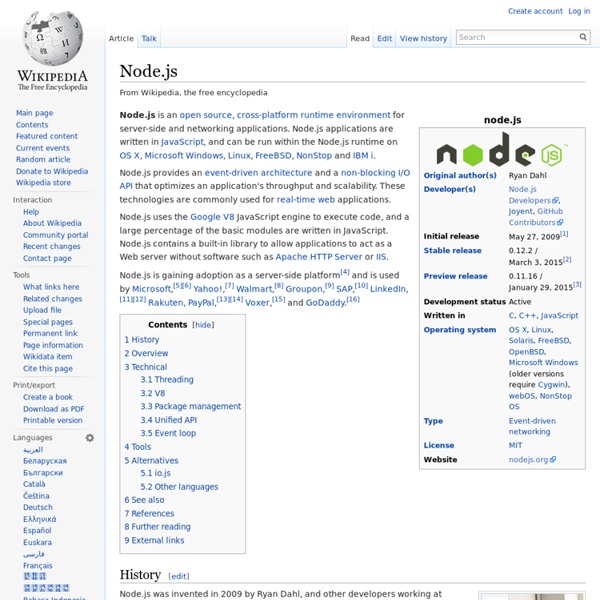 Node.js is an open source, cross-platform runtime environment for server-side and networking applications. Node.js applications are written in JavaScript, and can be run within the Node.js runtime on OS X, Microsoft Windows, Linux, FreeBSD, NonStop and IBM i. Node.js provides an event-driven architecture and a non-blocking I/O API that optimizes an application's throughput and scalability. Node.js is gaining adoption as a server-side platform[4] and is used by Microsoft,[5][6] Yahoo! History[edit] Ryan Dahl, creator of Node.js Node.js was invented in 2009 by Ryan Dahl, and other developers working at Joyent.[17] Node.js was created and first published for Linux use in 2009. Dahl was inspired to create Node.js after seeing a file upload progress bar on Flickr. In June 2011, Microsoft partnered with Joyent to implement a native Windows version of Node.js.[23] The first Node.js build to support Windows was released in July. In January 2014, Schlueter announced Timothy J. Overview[edit] V8[edit]

Introducing Linked Data And The Semantic Web Next: Introducing Graph Data What is Linked Data and the Semantic Web and what is all the hype about? Principally, the Semantic Web is a Web 3.0 web technology - a way of linking data between systems or entities that allows for rich, self-describing interrelations of data available across the globe on the web. In essence, it marks a shift in thinking from publishing data in human readable HTML documents to machine readable documents. How Does It Differ From The Web As It Is Today? Today, much of the data we get from the web is delivered to us in the form of web pages - HTML documents that are linked to each other through the use of hyperlinks. Enter Linked Data - Liberating Web Databases From Their Old Chains The web contains lots of information, but typically the raw data itself isn't available - rather only HTML documents constructed from data, if a web site is generated from a database at all. But Where Do I Start? It needn't be complicated.

Google Developers This morning we welcomed 6,000 developers to our 7th annual Google I/O developer conference. The crowd in San Francisco was joined by millions more watching on the livestream and 597 I/O Extended events, in 90+ countries on six continents. We're meeting at an exciting time for Google, and for our developer community. There are now one billion of you around the world who use an Android device. One billion. Today, developers got a preview of our most ambitious Android release yet. But, beyond the mobile phone, many of us are increasingly surrounded by a range of screens throughout the day--at home, at work, in the car, or even on our wrist. For more information visit Watch all Google I/O 2014 videos at: g.co/io14videos Show less