117 Most beautiful words in the English language 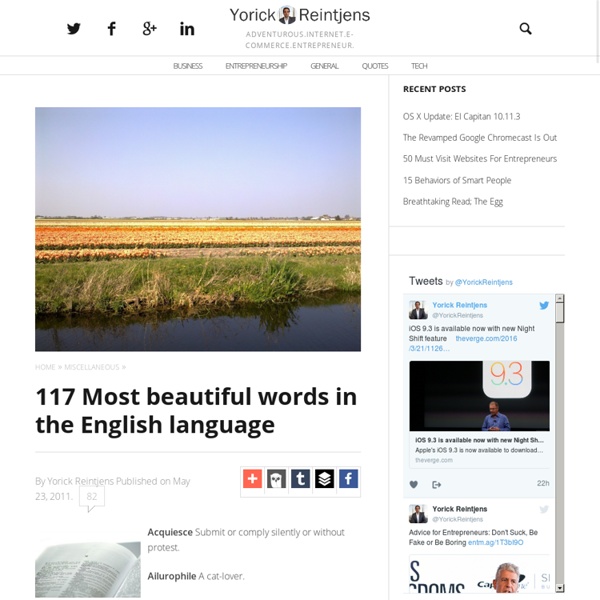 200 Words Instead of 'Said' - WritersBeat.com Not that anyone is asking me (but that has never stopped me before and it won't stop me now), but I do try to avoid using 'said' too much. It gets a tad tedious, I find. On the other hand, using a substitute simply for the sake of - well, using a substitute - can be ineffective. I thought your list was interesting, Somesh (beware whenever anyone says something is interesting

102 Resources for Fiction Writing « Here to Create UPDATE 1/10: Dead links removed, new links added, as well as Revision and Tools and Software sections. Are you still stuck for ideas for National Novel Writing Month? Or are you working on a novel at a more leisurely pace? Transitional Interfaces Designers love to sweat the details. Much time is spent pixel-fucking buttons, form styles, setting type, & getting those icons as sharp as a tack. A+, great job, don't stop you guys. ...but there's little consideration about how it all fits together outside of a static comp. You tap a button and the form just ...appears? You swipe to delete an item and it just vanishes? 30 Incorrectly Used Words That Can Make You Look Bad While I like to think I know a little about business writing, I often fall into a few word traps. For example, "who" and "whom." I rarely use "whom" when I should.

» New York Times 50 Most Challenging Words (defined and used) The New York Times recently published a list of 50 fancy words that most frequently stump their readership. They are able to measure this data thanks to a nifty in-page lookup mechanism, which you can try here. Try double-clicking the word “epicenter”. Since the NYT didn’t include definitions of these words, I decided to post a job to MediaPiston to produce an article defining and using each word in the list. Backstory: The More You Know, The Less I Have To Just in from teaching in Seattle and have NO VOICE. Hubby is a little more thrilled than he should probably show O_o. Anyway, the wonderful Piper Bayard is here for some more writing tips for those who want to NaNo. Even if you don’t?

Setting: Using Scene To Enrich Your Writing In both fiction and nonfiction, the setting is the general background against which your story takes place—the physical location and time period, both of which influence your characters and plot. So how can a creative writer use setting and scenery to further offset, augment, or reflect the action of the plot? Although we’re going to be exploring this issue in terms of fiction, these techniques work for nonfiction as well. These craft techniques work in all genres: poetry, stories, personal essays, memoir, and books. Suppose you’re writing a novel that is set in the Deep South in 1955 and your protagonist is an immigrant facing prejudice and roadblocks at every turn. You’d have a completely different novel if your protagonist were a Texas cowboy who found himself in Mississippi at that particular time and place.

Gamification from a Company of Pro Gamers Michael Wu, Ph.D. is Lithium's Principal Scientist of Analytics, digging into the complex dynamics of social interaction and group behavior in online communities and social networks. Michael was voted a 2010 Influential Leader by CRM Magazine for his work on predictive social analytics and its application to Social CRM.He's a regular blogger on the Lithosphere's Building Community blog and previously wrote in the Analytic Science blog.

The Magic Potion of Game Dynamics Michael Wu, Ph.D. is Lithium's Principal Scientist of Analytics, digging into the complex dynamics of social interaction and group behavior in online communities and social networks. Michael was voted a 2010 Influential Leader by CRM Magazine for his work on predictive social analytics and its application to Social CRM.He's a regular blogger on the Lithosphere's Building Community blog and previously wrote in the Analytic Science blog. You can follow him on Twitter at mich8elwu. When I kicked off this short-series on gaming last week I explained the various game related terminologies. Hopefully we are all on the same page now with the basics.