26 Beatnik Slang Words and Phrases We Should All Start Using 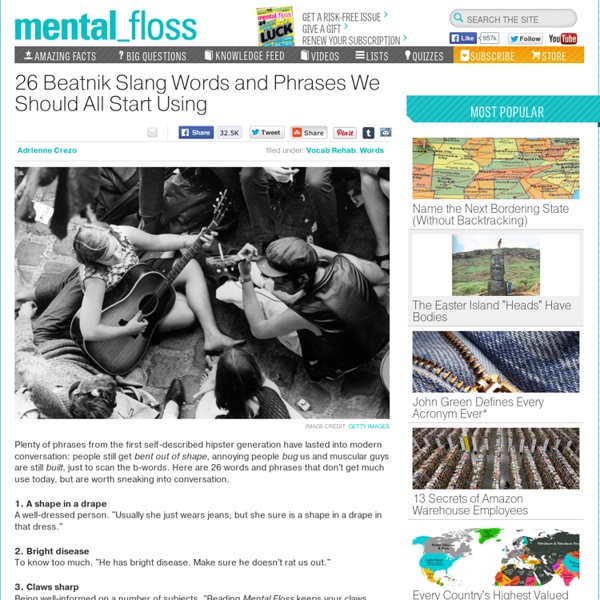 IdiomSite.com - Find out the meanings of common sayings For Gethard - Anonymous asks: Gethard I know you've talked bout depression and anxiety issues before and if you don't answer this cause it's a complete downer i understand but I'm curious if you ever had suicidal thoughts. I admire you and your show and h 25 Things You Should Know About Character - StumbleUpon Previous iterations of the “25 Things” series: 25 Things Every Writer Should Know 25 Things You Should Know About Storytelling And now… Here you’ll find the many things I believe — at this moment! — about characters: 1. Without character, you have nothing. 2. A great character can be the line between narrative life and story death. 3. Don’t believe that all those other aspects are separate from the character. 4. The audience will do anything to spend time with a great character. 5. It is critical to know what a character wants from the start. 6. It doesn’t matter if we “like” your character, or in the parlance of junior high whether we even “like-like” your character. 7. It is critical to smack the audience in the crotchal region with an undeniable reason to give a fuck. 8. You must prove this thesis: “This character is worth the audience’s time.” 9. Don’t let the character be a dingleberry stuck to the ass of a toad as he floats downriver on a bumpy log. 10. 11. 12. 13. The law of threes.

Guide for Writers: Latin Phrases It’s a matter of taste and style, but not long ago American writers attempted to demonstrate their credentials to the world by including Latin and French phrases within works. A dash of Latin was expected of the moderately educated throughout the Western world. annus mirabilis - wonderful year arbiter elegantiae - judge of the elegant; one who knows the good things in life bona fides - good faith; credentials carpe diem - sieze the day; enjoy the present casus belli - cause justifying a war caveat emptor - buyer beware cui bono? caeteris paribus - all things being equal de facto - of fact; it is de gustibus non est disputandum - no disputing tastes; there is no accounting for taste Dei gratia - by the grace of God Deo gratias - thanks to God Deo volente - God willing dis aliter visum - it seemed otherwise to the gods Dominus vobiscum - Lord be with you dulce et decorum est pro patria mori - sweet and seemly it is to die for one’s country ecce homo - behold man ex cathedra - with authority

Why the Snooze Button Is Ruining Your Sleep Howstuffworks "How Knights Work" When you think of knights, you might envision King Arthur, Sir Lancelot or the Black Knight. We often think of heroic knights in shining armor fighting each other with swords or riding their horses on noble quests. Our images of knights have been influenced over centuries by romance authors (like T.H. Medieval knights were, first and foremost, warriors. Knights were most noted for fighting on horseback, but they also battled on foot. In this article, we'll examine the lives of knights.

List of idioms in the English language This is a list of notable idioms in the English language. An idiom is a common word or phrase with a culturally understood meaning that differs from what its composite words' denotations would suggest. For example, an English speaker would understand the phrase "kick the bucket" to mean "to die" – and also to actually kick a bucket. Furthermore, they would understand when each meaning is being used in context. An idiom is not to be confused with other figures of speech such as a metaphor, which invokes an image by use of implicit comparisons (e.g., "the man of steel" ); a simile, which invokes an image by use of explicit comparisons (e.g., "faster than a speeding bullet"); and hyperbole, which exaggerates an image beyond truthfulness (e.g., like "missed by a mile" ). Visit Wiktionary's Category for over eight thousand idioms. See also[edit] References[edit] Jump up ^ "A bitter pill". Notes[edit]

Cobra Wallet - A modern wallet that compliments your phone by Joshua Moore & Alex Kennberg Missed our Kickstarter campaign? Pre-order at CobraWallet.com! CoolMaterial - "it’s designed like a cellphone. It’s optimized for your pants [...] It also doubles as a cell phone stand and has a secret compartment. Come on. GizMag - "The Cobra Wallet is an incredibly thin wallet [...] and many more! We are entrepreneurs and frequent travelers. We spent years searching for the perfect wallet and since we couldn't find it, we decided to design it ourselves. The wallet is inspired by the industrial design of modern mobile devices and our experiences with using over a dozen different wallets and card cases. Most phones either have a curved back or a very thin profile. The Cobra Wallet has two 316 stainless steel cores for rigidity, corrosion resistance, and RFID protection. Based on our research and experimentation over the past 2 years, the wallet has to accommodate at least 8 cards. We’ve tried over a dozen different business/credit card cases and wallets, new and old.

Creative Gibberish Divergent thinking – more than a mere tool – is a technique very commonly used on creative activities because it allows us to expand our brains a little bit, by looking for new opportunities and ways of getting things done. So, from the problem – or whatever triggers your creativity – to the solution, instead of taking obvious steps and walking on a straight line, you force yourself to see different aspects of the situation, using unusual points of view, no matter how abstract of absurd they seem at the first place. This can be done by allowing everyone to think more freely while working on the task, gathering ideas that have the slightest relation to the problem itself rather than looking straight for a practical solution. Most people tend to confuse divergent thinking – a technique, a way of using your brain – with brainstorming – which is more like a tool that uses this technique. So how can you improve your divergent thinking skills?

Bento Laptop Tablet Hybrid by René Woo-Ram Lee Bento is quite an exceptional and forward thinking concept by René Woo-Ram Lee. It’s quite a plausible scenario that most of use/own a tablet, a PC, external hard drives and a smartphone. Now combine the power of these to have fully customizable Bento Laptop! The Box accommodates all the gear to work as one whole unit or individually; as you see fit. Features Laptop with 15″ OLED screen11″ tablet and 4″ phone sit in shallow depressionsSolar powered lithium-ion battery1TB SSD drive Designer: René Woo-Ram Lee The Fujitsu branding is evident and rightly so, the concept is a part of the Fujitsu Design Award that is organized by Designboom.

Yes, good one! Let me know if you manage it ;)
Focus your audio
Know your groceries
Off the cob
X-ray eyes
Zonk on the head (this one totally sound like something you'd easily use)

"Interviewing Your Brains" ring very true for me. I'm going to have to work that one into my lingo. How about you? by featherking Feb 3