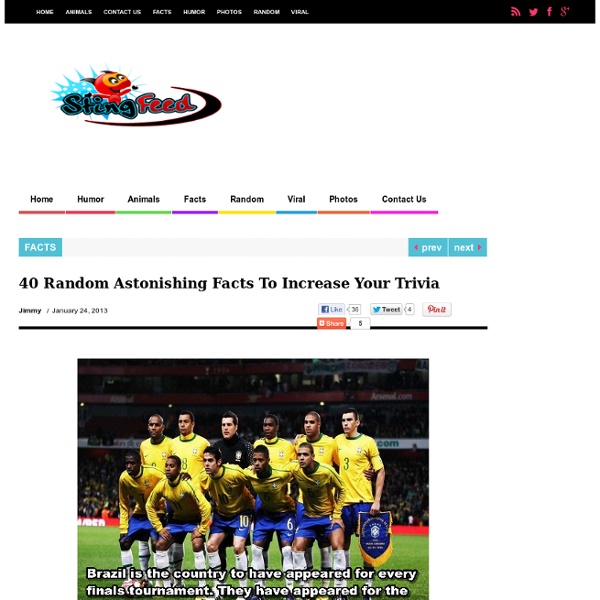 Stay Out of My Room Stupid kid. You don't say something like this when you have such awesome trolls as parents. Recommendations Curiosities: Inappropriate Children's Books Curiosities: Parental Failures Curiosities: A Sexist Kids Book Top Facts of All Time Anatidaephobia is the pervasive, irrational fear that, somewhere in the world, a duck is watching you. The person believes that no matter where they are or what they are doing, a duck is watching them. The people who suffer from this phobia have suffered some sort of trauma in their lives, likely when he or she was a child. This trauma probably had to do with a duck or some sort of related water fowl, like a goose. Perhaps the person was attacked by one of these animals. Some of the symptoms of this phobia include an anxiety or panic attack. This results in a dry mouth, shortness of breath, muscle tension, hyperventilation, etc. (Source)

If You're Too Busy to Meditate, Read This This morning, like every morning, I sat cross-legged on a cushion on the floor, rested my hands on my knees, closed my eyes, and did nothing but breathe for 20 minutes. People say the hardest part about meditating is finding the time to meditate. This makes sense: who these days has time to do nothing? It’s hard to justify. Meditation brings many benefits: It refreshes us, helps us settle into what’s happening now, makes us wiser and gentler, helps us cope in a world that overloads us with information and communication, and more. How? Research shows that an ability to resist urges will improve your relationships, increase your dependability, and raise your performance. Our ability to resist an impulse determines our success in learning a new behavior or changing an old habit. As it turns out, that’s one of the things meditation teaches us. When I sat down to meditate this morning, relaxing a little more with each out-breath, I was successful in letting all my concerns drift away.

10 false facts most people think are true Up until the late 16th century, everyone "knew" that the sun and planets revolved around the Earth. Up until the late 19th century, epidemic illnesses such as cholera and the plague were "known" to be caused by a poisonous mist filled with particles from rotting things. Up until the early 20th century, the most common procedure performed by surgeons for thousands of years was bloodletting, because we "knew" that blood drained from the body balanced the whacky humors responsible for poor health. Well alrighty then. But as misinformed as all that may sound now, our predecessors believed these "facts" with the same certainty that we believe that the Earth is round and hot fudge sundaes make us fat. Living in a time of such dazzling science and technology, we stand firmly behind our beliefs … even if so much of what we think we know to be correct is actually wrong. 1. 2. 3. 4. 5. 6. 7. 8. 9. 10. MNN tease photo of Viking: Shutterstock

This Awesome Urn Will Turn You into a Tree After You Die You don't find many designers working in the funeral business thinking about more creative ways for you to leave this world (and maybe they should be). However, the product designer Gerard Moline has combined the romantic notion of life after death with an eco solution to the dirty business of the actual, you know, transition. His Bios Urn is a biodegradable urn made from coconut shell, compacted peat and cellulose and inside it contains the seed of a tree. I, personally, would much rather leave behind a tree than a tombstone. Related Content If You Liked the 'Bios Urn,' You'll Love 'The Spirit Tree' Daniel Honan Managing Editor, Big Think Clever Ads Billboard Here is a series of brilliant billboard ads dedicated to promoting science in Vancouver, by Science World Museum in collaboration with Rethink Canada… World museum – Rethink Canada

The 10 Commandments From a Dog's Perspective 1. My life is likely to last 10 to 15 years; any separation from you will be painful for me. Remember that before you adopt me. 2. 3. 4. 5. 6. 7. 8. 9. 10. Author Stan Rawlinson1993 Nils Olav Coordinates: Colonel-in-Chief Sir Nils Olav is a King Penguin living in Edinburgh Zoo, Scotland. He is the mascot[1][2][3] and Colonel-in-Chief of the Norwegian Royal Guard. Nils was visited by soldiers from the Norwegian Royal Guard on 15 August 2008 and awarded a knighthood.[4] The honour was approved by King Harald V. Role in the military[edit] The bronze statue of Nils Olav Norway – whose explorer Roald Amundsen was the first person to reach the South Pole in 1911 – presented the zoo with its first King Penguin at its opening in 1913.[5] When the Norwegian King's Guard visited the Edinburgh Military Tattoo of 1961 for a drill display,[7] a lieutenant called Nils Egelien became interested in Edinburgh Zoo's penguin colony. In Norway he is consistently referred to only as the mascot of the King's Guard[citation needed], although the plaque on his statue and the website of the Norwegian Government's Consulate in Edinburgh, refer to his promotion to Colonel-in-Chief. See also[edit]

The reality of parallel worlds and time travel is proved In 2002 Nobel Prize winner, American physicist Raymond Davis made a sensational statement: the existence of a parallel world is proved. Neutrino, the smallest particle known to science, exists simultaneously in two worlds: in ours, the material one, and in a parallel one. Up until the 1930s, scientists used to deny the existence of supernatural forces. Then young Swiss physicist Wolfgang Pauli suggested a crazy hypothesis: there are particles with no mass, and they can freely depart from the laboratory, without being recorded by physical devices. Studies related to the properties of neutrinos are classified in many countries. The laws of fundamental physics say: if an object is moving with the speed of light, time stops for it. Another sensational discovery was made by researchers from the University of North Carolina and Rochester. In fact, the first message using neutrino beam has already been transferred. Maybe that could also explain the phenomenon of clairvoyance?

The Traveller's Medicine Cabinet: 5 Essential Drugs for the Road While out roving you aren’t always (or even often) anywhere near a hospital or pharmacy. But, if you pack these nutritional supplements and natural medications wherever you go, you’ll be able to cope just fine. #1: Kratom The Situation You’re hiking the Appalachian trail in the dead of winter. Suddenly the worst happens; your boot gets caught between two rocks, you lose your footing and tumble to the ground, wrenching your ankle in the process. © Miserlou What It Is A leafy green plant grown mainly in Southeast Asia. Uses First and foremost, Kratom is a powerful painkiller similar to Morphine or Opium. Side-Effects Kratom is mildly addictive, about on par with caffeine. Forms Kratom can be purchased in dried leafy form, as an extract, a resin, or in pill form. Legality Kratom is legal in most of the developed world. #2: Kava Kava Kava Kava A leafy green plant grown throughout the Pacific islands. Kava can help to treat social anxiety or stress, and also works as a powerful relaxant. Oil of Oregano

Extraordinary Brush-Less Paintings Amy Shackleton, who is only 25-years-old, is a unique artist. While her paintings use tons and tons of paint, she doesn't use paintbrushes to create them! Rather, she squeezes paint onto canvases and then allows the paint to naturally drip. She then rotates the canvas to control the direction of the drips, making her paintings appear natural yet controlled. The subjects of many of her paintings are also quite interesting. They often feature a blend of the natural world and the man-made world, such as a river in the streets, trees growing with skyscrapers and cities in mountainous ranges. We were so intrigued by her process that we decided to ask Amy some questions. When did you first know that you wanted to become a professional artist? As a child, I taught myself the basics by drawing and sketching in my free time. Your process is so unique. I worked on unstretched canvas at first, so the surface was flexible and I could move it whichever way I wanted. How do you stay creative?

15 Astounding Facts Funny This is a selection of some of the most astounding facts. For example, did you know that Starbuck spends more on health insurance for its employees than on coffee beans? Found this on Nedhardy. Share