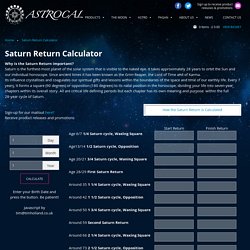 Saturn is the furthest-most planet of the solar system that is visible to the naked eye. It takes approximately 28 years to orbit the Sun and our individual horoscope. Since ancient times it has been known as the Grim Reaper, the Lord of Time and of Karma. Its influence crystallises and coagulates our spiritual gifts and lessons within the boundaries of the space and time of our earthly life. Every 7 years, it forms a square (90 degrees) or opposition (180 degrees) to its natal position in the horoscope, dividing your life into seven-year chapters within its overall story. Sign-up for our mailout here? Share. Saturn return - Wikipedia. Psychologically, the first Saturn return is seen as the time of reaching full adulthood, and being faced, perhaps for the first time, with adult challenges and responsibilities.[3] In Western astrology[edit] The phenomenon is described by Western astrologers as influencing a person's life development at roughly 29.5 year intervals, though the planetary influence may be felt for a few years before the exact conjunction, and variable orbits of the planets can also make the time period longer or shorter. 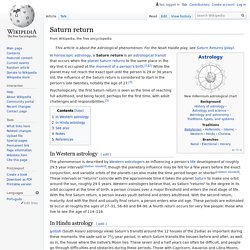 These intervals or "returns" coincide with the approximate time it takes the planet Saturn to make one orbit around the sun, roughly 29.5 years. Western astrologers believe that, as Saturn "returns" to the degree in its orbit occupied at the time of birth, a person crosses over a major threshold and enters the next stage of life. With the first Saturn return, a person leaves youth behind and enters adulthood. In Hindu astrology[edit] See also[edit] Capricorn - The Goat - Astrology. Capricorn - The Goat - 22 December - 19 JanuaryA Feminine, Cardinal Earth sign. 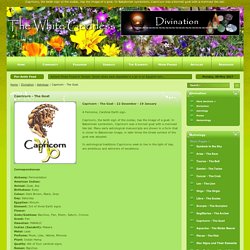 Capricorn, the tenth sign of the zodiac, has the image of a goat. In Babylonian symbolism, Capricorn was a horned goat with a mermaid like tail. Many early astrological manuscripts are shown in a form that is closer to Babylonian image, in later times the Greek symbol of the goat was adopted. In astrological traditions Capricorns seek to live in the light of day, are ambitious and admirers of excellence. Correspondences Alchemy: FermentationAmerican Indian: Animal: Goat, AssBirthstone: RubyColour: Dark Brown, Black, GreyDay: SaturdayEgyptian: KhnumElement: 3rd of three Earth signsFlower: Gods/Goddess: Bacchus, Pan, Khem, Saturn, CronosGreek: PanHawaiian: MAKALIIIndian (Sanskrit): MakaraMetal: LeadPerfume: Musk, Lilac, Vetiver, MimosaPlant: Indian HempQuality: 4th of four cardinal signsRoman: BacchusTarot: DevilWeapon: The Secret Force. Capricornus - Wikipedia. 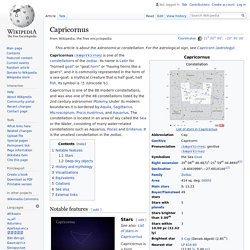 Notable features[edit] The constellation Capricornus as it can be seen with the naked eye.[2] Stars[edit] Capricornus is a faint constellation, with only one star above magnitude 3; its alpha star has a magnitude of only 3.6. The brightest star in Capricornus is δ Capricorni, also called Deneb Algedi, with a magnitude of 2.9, 39 light-years from Earth. The other bright stars in Capricornus range in magnitude from 3.1 to 5.1. α Capricorni is a multiple star also known as Algedi or Giedi. Β Capricorni is a double star also known as Dabih. Deep-sky objects[edit] Several galaxies and star clusters are contained within Capricornus. M30 (NGC 7099) is a centrally-condensed globular cluster of magnitude 7.5. One galaxy group located in Capricornus is HCG 87, a group of at least three galaxies located 400 million light-years from Earth (redshift 0.0296). History and mythology[edit] Blue moon. A blue moon is an additional full moon that appears in a subdivision of a year: either the third of four full moons in a season, or a second full moon in a month of the common calendar. 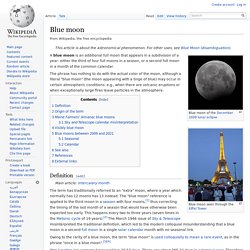 The phrase has nothing to do with the actual color of the moon, although a literal "blue moon" (the moon appearing with a tinge of blue) may occur in certain atmospheric conditions: e.g., when there are volcanic eruptions or when exceptionally large fires leave particles in the atmosphere. Definition[edit] The term has traditionally referred to an "extra" moon, where a year which normally has 12 moons has 13 instead. The "blue moon" reference is applied to the third moon in a season with four moons,[1] thus correcting the timing of the last month of a season that would have otherwise been expected too early. Astrological Influences of Chiron. Of the planets in our solar system visible to the naked eye, Saturn is arguably the most spectacular. 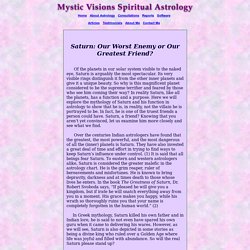 Its very visible rings distinguish it from the other inner planets and give it a unique beauty. So why is this magnificent planet considered to be the supreme terrifier and feared by those who see him coming their way? Astrological Influences of Chiron. 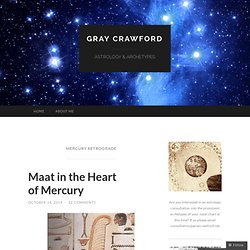 Pisces is always on our minds at this time of year, the end of Winter in our northern hemisphere, with green shoots soon to be Narcissus poking through the dark earth. This February and March, however, has more Piscean energy than normal.