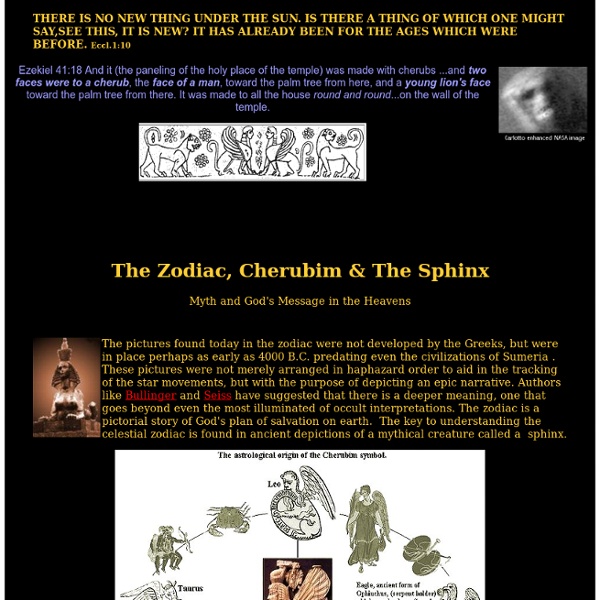 Ezekiel 41:18 And it (the paneling of the holy place of the temple) was made with cherubs ...and two faces were to a cherub, the face of a man, toward the palm tree from here, and a young lion's face toward the palm tree from there. It was made to all the house round and round...on the wall of the temple. Myth and God's Message in the Heavens The pictures found today in the zodiac were not developed by the Greeks, but were in place perhaps as early as 4000 B.C. predating even the civilizations of Sumeria . These pictures were not merely arranged in haphazard order to aid in the tracking of the star movements, but with the purpose of depicting an epic narrative. Authors like Bullinger and Seiss have suggested that there is a deeper meaning, one that goes beyond even the most illuminated of occult interpretations. Sphinx were often placed at entrances to palaces or temples of antiquity. printer friendly version Please view the following books for further info:Witness of the Stars by E.W. Related:  Astrology • Tarots • Histroy photo

TMPSNAPSHOT1400873505179 Astrology & the Chakras In this article I would like to explore the exciting possibility of bridging two of history's greatest psychological systems -- astrology and the chakras. Conventionally, these two systems have been seen as having little or nothing to do with each other, the former primarily concerning the outer world, or macrocosm, and the latter involving the inner world, or microcosm. In fact, as we shall soon see, these two systems are but two sides of the same coin, each one complementing the other and thus enhancing our understanding of both. The basic system of correspondences I will be using here is drawn from teachers I have studied with in the Kriya Yoga lineage.1 The general system of "chakric horoscopes" and their guidelines for interpretation are my own, developed over more than a decade of working with these basic correspondences. What Are the Chakras? In Sanskrit, the word chakra (sometimes spelled "cakra") literally means "wheel". Chakra 1, at the base of the spine, is called Muladhara.

Box of Goodies I’ve realized that the only way to create realistic outdoor scenes is by adding lots and lots of nature elements. Things like trees, flowers, bushes, rocks etc. are essential in making the scene look “believable”. But I also know that creating these things by hand takes a very long time. And not everyone has time to sit down for hours on end and create tree after tree after tree. Which is why I’ve done the hard work for you :) The Box of Goodies! Inside this box of goodies you’ll find 9 nature models that you can keep. As well as this you’ll find a collection of grass reference photos that will help you to better create it in blender. Eg. What will you do with yours? Drop your email address in the box to the right and I’ll send the Box of Goodies your way.

The moon in astrology - moon signs - Your inner self - Horoscope moonsigns - Astrology symbols - the moon Perhaps the major drawback of popular astrology - and another reason for its questionable status - is that it fails to recognize the importance of the moon. The moon symbolizes in astrology pretty much all of the self that isn't covered by the sun. Astrologers say the moon is the feminine or "passive" part of the psyche, and a more responsive energy compared to the sun. While misleading, it is true that the astrological symbolism of the moon is similar to traditional images of femininity. To find out your moon sign you can use this calculator: lunarium.co.uk The moon through the signs Part 1:Moon in Aries, Taurus, Gemini, Cancer, Leo or Virgo Part 2:Moon in Libra, Scorpio, Sagittarius, Capricorn, Aquarius or Pisces

Ancient Atomic Wars - Best Evidence? by Philip Coppens January 2005 from PhilipCoppens Website recovered through WayBackMachine Website Did an ancient advanced civilization exist on Earth? The question is very intriguing and the search for “evidence” to support a positive answer has intrigued Mankind for many decades – if not centuries. Rather than an accumulation of various items of evidence that is then subjected to the possibility that it might be either alien or advanced, it is more scientific – and perhaps better- to focus on the quest for the “best evidence”: a single piece of evidence that in itself is the best example to support a conclusion. In the search for an advanced ancient civilization, what would be this “best evidence”? One possible item that would classify as “best evidence” exists within the Indus River Valley, where towns such as Harappa and Mohenjo Daro flourished in 3000 BC. If true, it would be impossible to ignore the conclusion that ancient civilization possessed high technology. The ruins of Harappa A.

Main Page - Astro-Databank, Astrology data and horoscope of 2000 Moralization of the Deck of Cards, Part 3 « Mary K. Greer's Tarot Blog After exploring five hundred years of the moralization of playing cards in Part 1 and Part 2, we finally get to playing cards and, eventually, tarot, as a book of wisdom. I included this section under the theme of “moralization” because it shows a development of this theme into social-spiritual-political reform and a shift from an orthodox Christianity to a Humanism that arose in the Renaissance and Enlightenment. We see here that playing cards (and/or tarot) have been viewed, on occasion, as a book of the wise, teaching a timeless philosophy leading to the betterment of humankind. I’d like to preface this section with a reminder of the origins of the occult tarot. Radical Social Reform and the Hieroglyphs of the Wise In 1781 Antoine Court de Gébelin (actually Antoine Court, from Gébelin), son of a famous Huguenot pastor, published an essay in his encyclopedic work, Le Monde Primitif, in which he declared the tarot came from Egypt and was related to the Hebrew letters. Pure Speculation