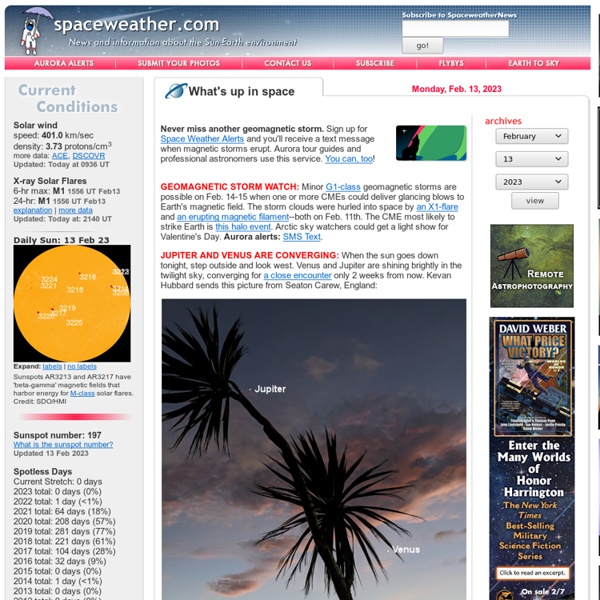 Black Holes: Gravity's Relentless Pull Black holes are places where ordinary gravity has become so extreme that it overwhelms all other forces in the Universe. Once inside, nothing can escape a black hole's gravity — not even light. Yet we know that black holes exist. We know how they are born, where they occur, and why they exist in different sizes. We even know what would happen if you fell into one. Education NASA Education Programs and Projects A-Z list of education opportunities that NASA offers throughout the year NASA's Education Calendar The calendar features information about NASA Education opportunities for students and educators. NASA's One Stop Shopping Initiative Website Apply for NASA internship, fellowship and scholarship opportunities through a single application.

» Why Are Preppers Hated So Much? Alex Jones Michael SnyderAmerican Dream Dec 11, 2012 Have you noticed that it has become trendy to bash preppers? For a long time the prepper movement was ignored, but now it has become so large that it is getting very difficult for the mainstream media to pretend that it is not there. In fact, it has been estimated that there are now approximately 3 million preppers in the United States alone. So now the mainstream media has decided that mocking the movement is the best strategy, and lots of “critics” and “skeptics” out there have picked up on this trend. Instead of addressing the very real issues that have caused millions of Americans to prepare for the worst, those criticizing the prepper movement attempt to put the focus on individual personalities.

Giant Asteroid Vesta Has Mountain Taller Than Anything on Earth A NASA spacecraft orbiting the asteroid Vesta is revealing new details about the huge space rock's surface, including a massive mountain that rises taller than Mt. Everest on Earth. NASA's Dawn probe has been circling Vesta since mid-July, when it arrived in the asteroid belt that orbits the sun between Mars and Jupiter. How to See the Best Meteor Showers of the Year A Geminid meteor. Image credit: Jimmy Westlake› Larger image December 31, 2011 Update: Friday Dec. 20, 2013

For Students Current Opportunities for Students Browse current offerings by opportunity type. NASA's One Stop Shopping Initiative Website Apply for NASA internship, fellowship and scholarship opportunities through a single application. Pathways Programs at NASA These programs provide opportunities for students and recent graduates to be considered for federal employment. Student Programs and Projects A-Z list of education opportunities that NASA offers throughout the year. Exploring Careers @ NASA The modules on this page lead to steps you can take now that may help land the job you want at NASA. Alan Friedman’s Astonishing HD Photographs of the Sun Shot from his Own Backyard Alan Friedman is a fascinating guy. By day he’s a maker of greeting cards and a lover of hats, but in his spare time he’s a self-proclaimed space cowboy who points a telescope skyward from his backyard in downtown Buffalo, directly into the light of the sun. Using special filters attached to his camera Friedman captures some of the most lovely details of the Sun’s roiling surface. The raw images are colorless and often blurry requiring numerous hours of coloring, adjusting and finessing to tease out the finest details, the results of which hardly resemble what I imagine the 5,500 degree (Celsius) surface of Sun might look like.

So,What Really Happens When The SHTF?(excellent reading) So What Really Happens When the SHTF? By Douglas Herman 3-10-11 "Believe me, the next step is a currency crisis because there will be a rejection of the dollar, the rejection of the dollar is a big, big event, and then your personal liberties are going to be severely threatened." -Ron Paul We live in an exciting, scary time. But then collapsing empires, much like imploding skyscrapers, are visually compelling events, complete with dozens of theories about how and why they collapsed and who profits and who loses by that collapse. NASA space assets detect ocean inside Saturn moon NASA’s Cassini spacecraft and Deep Space Network have uncovered evidence that Saturn’s moon Enceladus harbors a large underground ocean of liquid water, furthering scientific interest in the moon as a potential home to extraterrestrial microbes. Researchers theorized the presence of an interior reservoir of water in 2005 when Cassini discovered water vapor and ice spewing from vents near the moon’s south pole. The new data provide the first geophysical measurements of the internal structure of Enceladus, consistent with the existence of a hidden ocean inside the moon.

Assassin in Chief? As the worldwide drone program ramps up, there have been increasing calls for the president to reveal the basis for his claimed authority. Only a few weeks ago, U.S. District Court Judge Colleen McMahon denied both the ACLU's and New York Times' requests under the Freedom of Information Act to obtain any and all legal documents prepared in support of the president's claim of unilateral powers. While Judge McMahon was concerned that the documents "implicate serious issues about the limits on the power of the Executive Branch under the Constitution and laws of the United States, and about whether we are indeed a nation of laws not of men," she felt constrained by precedent to withhold them. Now, a bipartisan group of 11 senators has written a letter to president Obama asking for "any and all legal opinions" that describe the basis for his claimed authority to "deliberately kill American citizens." According to the white paper, there are only three requirements to order a killing.