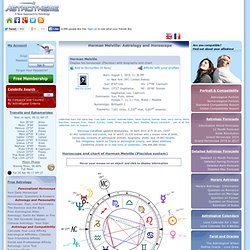 His colour is red, his stone is the heliotrope, his day is Tuesday, and his professions are businessman, policeman, sportsman, surgeon... If your sign is Aries or your Ascendant is Aries: you are courageous, frank, enthusiastic, dynamic, fast, bold, expansive, warm, impulsive, adventurous, intrepid, warlike, competitive, but also naive, domineering, self-centred, impatient, rash, thoughtless, blundering, childish, quick-tempered, daring or primitive.

Some traditional associations with Aries: Countries: England, France, Germany, Denmark. Signs: Taurus "I have"April 21 - May 20 1st Earth sign - 1st Fixed sign - Feminine In analogy with Venus, his ruler, and the 2nd House Signs: Gemini "I think"May 21 - June 21. Cetus. Cetus, the whale, or Sea Monster, has been identified, at least since Aratos' day (3rd century B.C.), with the fabled creature sent by Neptune (Poseidon) to devour Andromeda, but turned to stone at the sight of the Medusa's head (Algol) in the hand of Perseus. 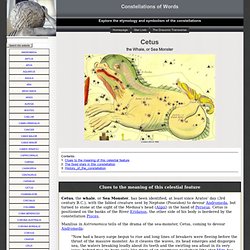 Cetus is positioned on the banks of the River Eridanus, the other side of his body is bordered by the constellation Pisces. Manilius in Astronomica tells of the drama of the sea-monster, Cetus, coming to devour Andromeda: "Now had a heavy surge begun to rise and long lines of breakers were fleeing before the thrust of the massive monster. As it cleaves the waves, its head emerges and disgorges sea, the waters breaking loudly about its teeth and the swirling sea afloat in its very jaws; behind rise its huge coils like rings of an enormous neckchain [the star Mira has been called the constellation's necklace], and its back covers the whole sea.

Indo-European sqalos, squalus, (cf. Salt comes from the Indo-European root *sal-1 'Salt'. Draco, etymology, mythology, and symbolism of the constellation. Argo Navis. "Then famed Argo, raised to the skies from the sea which it was the first to cross, occupies the heaven it earned through grievous perils in a bygone age, made a god for having given safety to gods" [Manilius, Astronomica, book 1, p.37]. 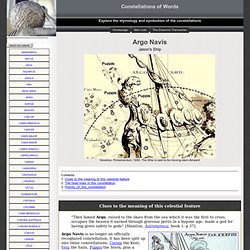 Johann Rost, Atlas portatalis coelestis, 1723 1 Argo Navis is no longer an officially recognized constellation, it has been split up into three constellations; Carina the Keel, Vela the Sails, Puppis the Stern, plus a subordinate division of Argo now called Pyxis Nautica, the Nautical Box or Mariner's Compass, and which used to be called Malus, the Mast. In Greek Mythology Argo Navis represents the Ship used by Jason and fifty Argonauts to sail to fetch the Golden Fleece from Colchis (Iolcus) in the Black Sea. The Argo was built by the shipwright Argos or Argus. It was built at the port of Pagasae, using timber from nearby Mount Pelion. "Ancient authors were divided about the origin of the name of the ship. Canopus is the alpha star of Carina. John F. Birk, Tracing the Round: the Astrological Framework of M. Fixed Stars Lists.