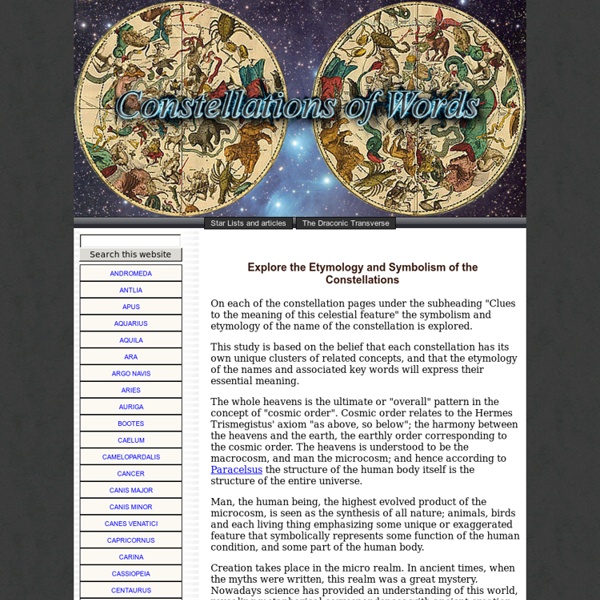 New Constellation Symbols Calligraphic version | Fixed-width version There are symbols for the twelve classical constellations of the zodiac, which are primarily used for astrological purposes. Two symbols have been proposed for Ophiuchus, the thirteenth constellation of the zodiac - one in general use in Japanese astrology and the other based on the rod of Aesclepius. For the book One Hundred Year Star-Diary, I created symbols for a number of meteor showers. Ophiuchus- The “New” Astrological Symbol - Ancient History Blog Ophiuchus- The “New” Astrological Symbol It seems like a lot of changes have been going on in the cosmos. First, Astronomers talked about Pluto, the planet that was suddenly not a planet. The next discovery came in the form of an announcement that a “new” Zodiac symbol had been discovered. This new Zodiac symbol was believed to have thrown the entire system on its head.

Aleister Crowley's writings on astrology The General Principles of Astrology These two books were published under the authorship of Evangeline Adams, but were both largely ghost-written by Aleister Crowley in 1915 as the document The General Principles of Astrology Astrology: Your Place in the Sun (1927) Astrology: Your Place Among The Stars with One Hundred Horoscopes of Famous People (1930) Additional Reading Argo Navis "Then famed Argo, raised to the skies from the sea which it was the first to cross, occupies the heaven it earned through grievous perils in a bygone age, made a god for having given safety to gods" [Manilius, Astronomica, book 1, p.37]. Johann Rost, Atlas portatalis coelestis, 1723 1 Argo Navis is no longer an officially recognized constellation, it has been split up into three constellations; Carina the Keel, Vela the Sails, Puppis the Stern, plus a subordinate division of Argo now called Pyxis Nautica, the Nautical Box or Mariner's Compass, and which used to be called Malus, the Mast. In Greek Mythology Argo Navis represents the Ship used by Jason and fifty Argonauts to sail to fetch the Golden Fleece from Colchis (Iolcus) in the Black Sea. The Argo was built by the shipwright Argos or Argus.

The LEGITIMATE Jordan Maxwell Podcast: Play in new window | Download (Duration: 45:15 — 42.0MB) The bible is, to put simply, the war between light and darkness. There are 12 hours of light, and there are 12 hours of darkness. Tropical & Sidereal Zodiac Systems by Jagdish C. Maheshri The Earth, while orbiting around the Sun in its elliptical trajectory, also rotates around its North-South axis. The plane of its orbit around the Sun is tilted with the plane of Earth's rotation about its North-South axis by about 23 1/2 degrees. The Earth's rotation around itself is from West to East (eastward) once every 24 hours. As a result, the Sun appears to rise in the East in the morning and set in the West in the evening. When observed through successive nights, the stars in the sky will appear to move from East to West. The spherical space around the Earth (at anytime we see only a part of it) is called the celestial sphere.

THE STELLIUM - 4 or more planets in the same House : Lynn Koiner - Astrological Research THE STELLIUM by Lynn Koiner A stellium occurs when 4 or more planets fall in a House. This configuration creates too much energy coming into the activities and affairs of that House. It generates obsessive energy. The individual becomes obsessively focused with the activities of that House. The affairs of that House take up all of the energies of the individual. Cetus Cetus, the whale, or Sea Monster, has been identified, at least since Aratos' day (3rd century B.C.), with the fabled creature sent by Neptune (Poseidon) to devour Andromeda, but turned to stone at the sight of the Medusa's head (Algol) in the hand of Perseus. Cetus is positioned on the banks of the River Eridanus, the other side of his body is bordered by the constellation Pisces. Manilius in Astronomica tells of the drama of the sea-monster, Cetus, coming to devour Andromeda: "Now had a heavy surge begun to rise and long lines of breakers were fleeing before the thrust of the massive monster. As it cleaves the waves, its head emerges and disgorges sea, the waters breaking loudly about its teeth and the swirling sea afloat in its very jaws; behind rise its huge coils like rings of an enormous neckchain [the star Mira has been called the constellation's necklace], and its back covers the whole sea. Indo-European sqalos, squalus, (cf.

The LEGITIMATE Jordan Maxwell Podcast: Play in new window | Download (Duration: 45:44 — 42.4MB) Astro-Theology is Religion from the Gods The Bible is the greatest Story Every told. Astro-Theology is the study of God. Micro Astrology: The Mysteries of Time and Event by Saibal Ghosh Micro astrology is that part of astrology which define shortest period of time for any human event realization, decision and action. It is a part of astrology, which very few astrologers used to practice to predict every upcoming event. The time configuration is continuous in Micro astrology. Micro astrology is the subject, which can deliberately prove the validity of astrology in terms of time analysis and not in terms of planetary influence.