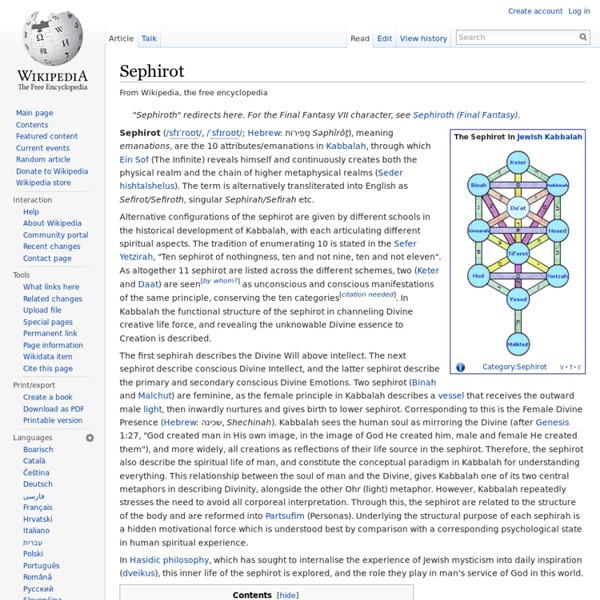 Sephirot (/sfɪˈroʊt/, /ˈsfɪroʊt/; Hebrew: סְפִירוֹת‎ Səphîrôṯ), meaning emanations, are the 10 attributes/emanations in Kabbalah, through which Ein Sof (The Infinite) reveals himself and continuously creates both the physical realm and the chain of higher metaphysical realms (Seder hishtalshelus). The term is alternatively transliterated into English as Sefirot/Sefiroth, singular Sephirah/Sefirah etc. Alternative configurations of the sephirot are given by different schools in the historical development of Kabbalah, with each articulating different spiritual aspects. The tradition of enumerating 10 is stated in the Sefer Yetzirah, "Ten sephirot of nothingness, ten and not nine, ten and not eleven". As altogether 11 sephirot are listed across the different schemes, two (Keter and Daat) are seen[by whom?] as unconscious and conscious manifestations of the same principle, conserving the ten categories[citation needed]. Ten Sephirot[edit] Listings[edit] Description[by whom?] [edit] Notes[edit]

Joseph Smith and Kabbalah Figure 1. A Kabbalist contemplates the "tree" of the ten Sefiroth, the Kabbalistic Tree of Life. One of the first printed illustrations of the Sefiroth in this form, it appeared on the title page from a Latin translation of a Kabbalistic work by J. Gikatilla.

Ancient earthwork bordering England and Wales is older than previously thought Ancient Origins seeks to uncover, what we believe, is one of the most important pieces of knowledge we can acquire as human beings – our beginnings. While many believe that we already hold such knowledge, our view is that there still exists a multitude of anomalies and mysteries in humanity's past that deserve further examination. We therefore wish to foster an open community that is dedicated to investigating, understanding and explaining the origins of our species on planet earth. To this end, we aim to organize, support and even finance efforts in this direction. Our aim is to move beyond theories and to present a thorough examination of current research and evidence and to offer alternative viewpoints and explanations to those currently held by mainstream science and archaeology. Come with us on a journey to explore lost civilisations, sacred writings, ancient places, unexplained artefacts and scientific mysteries while we seek to reconstruct and retell the story of our beginnings.

Kabbalah 301.10: Enjoy the fruits of God's kingdom in Malkut - Fort Lauderdale new age The Tenth and Final Sefira on the Tree of Life is Malkut (“Kingdom”), located at the very bottom and Center of the Tree of Life. Malkut is not just the Planet Earth, which is the traditional Idea, but also the Material World, in every sense of the Word, and so very much more. The “Tenth Path” of the “Thirty-Two Paths of Wisdom” reads as follows: The Tenth Path is the Magnificent Intelligence (Sekhel MitNotzetz ץצונתמ לכש), It Shall elevate Itself and sit on the Throne Of Understanding. It shines with the Radiance of all the Luminaries, and causes a supply of Abundance to emanate from the Macroprosopus.

Earth's Grid System, Becker-Hagens, Ley Lines, Hartmann Net, Curry Lines - Science and Pseudoscience Earth's Grid Systems Science and Pseudoscience Topography, is the study of Earth's surface shape and features or those of planets, moons, and asteroids. Plants For A Future : 7000 Edible, Medicinal & Useful Plants Recommended this month New Book ** Edible Perennials: 50 Top perennials from Plants For A Future [Paperback] Current interest in forest or woodland garden designs reflects an awareness that permanent mixed plantings are inherently more sustainable than annual monocultures. They safeguard and enrich soil ecosystems, enable plants to form cooperative combinations, make use of layers above and below the soil, and they create benign microclimates which soften winds and recycle the rain. The challenge is productivity: how can yields of useful foods and other useful materials be maximised?

Mexican archaeologists unearth ancient 1,100-year-old burial chamber Archaeologists have discovered an ancient 1,100-year-old burial chamber at the archeological site of Atzompa, in the Mexican state of Oaxaca. The funerary complex, consisting of three burial chambers, is different from the previously discovered finds in the region. It was located inside a building designed exclusively to house a series of tombs placed vertically, one above another, and unlike the ones found so far, they are not underground, according to the National Institute of Anthropology and History. REUTERS/INAH/HandoutA view of the building (top) where archeologists found a burial chamber at the archeological site of Atzompa. View more photo galleries — Follow NP Photos on Twitter

Persian alphabet, pronunciation and language The Persian language has been written with a number of different scripts, including the Old Persian Cuneiform, Pahlavi, Aramaic, and Avestan, Cyrillic and Latin alphabets. After the Islamic conquest of the Persian Sassanian Empire in 642 AD, Arabic became the language of government, culture and especially religion. Modern Persian appeared during the 9th century. It is written in a version of the Arabic script and is full of words of Arabic origin. There are also two methods of writing Persian with the Latin alphabet. Ein Sof Ein Sof, or Ayn Sof (/eɪn sɒf/, Hebrew: אין סוף), in Kabbalah, is understood as God prior to his self-manifestation in the production of any spiritual Realm, probably derived from Ibn Gabirol's term, "the Endless One" (she-en lo tiklah). Ein Sof may be translated as "no end", "unending", "there is no end", or Infinity.[1] Ein Sof is the divine origin of all created existence, in contrast to the Ein (or Ayn), which is infinite no-thingness.[citation needed] It was first used by Azriel ben Menahem, who, sharing the Neoplatonic view that God can have no desire, thought, word, or action, emphasized by it the negation of any attribute. Of the Ein Sof, nothing ("Ein") can be grasped ("Sof"-limitation). It is the origin of the Ohr Ein Sof, the "Infinite Light" of paradoxical divine self-knowledge, nullified within the Ein Sof prior to Creation.

Zero in Four Dimensions Zero in Four Dimensions: Historical, Psychological, Cultural, and Logical Perspectives Hossein Arsham University of Baltimore, Baltimore, Maryland, 21201, USAharsham@ubmail.ubalt.edu Contents: 1. Trees of Life: A Visual History of Scientific Diagrams Explaining Evolution by Maria Popova Mapping 450 years of humanity’s curiosity about the living world and the relationships between organisms. Since the dawn of recorded history, humanity has been turning to the visual realm as a sensemaking tool for the world and our place in it, mapping and visualizing everything from the body to the brain to the universe to information itself. Trees of Life: A Visual History of Evolution (public library) catalogs 230 tree-like branching diagrams, culled from 450 years of mankind’s visual curiosity about the living world and our quest to understand the complex ecosystem we share with other organisms, from bacteria to birds, microbes to mammals. Theodore W. Pietsch writes in the introduction: