What Your Name Means (Numerology) 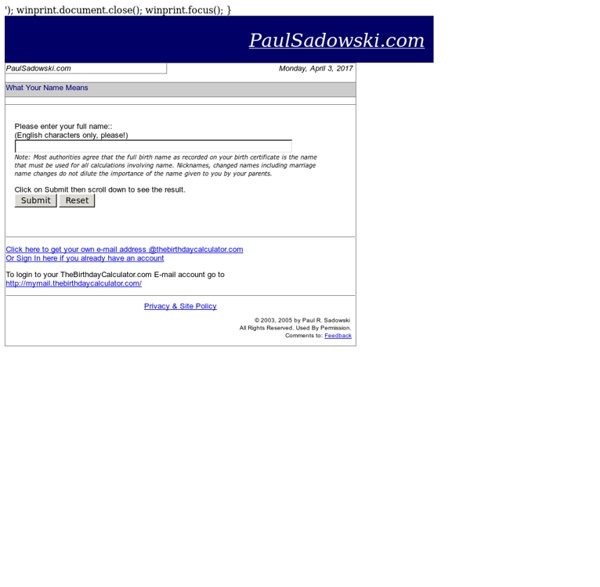 The Lion, the Witch, and Xandir’s Wardrobe | The Drawn Together RPG Center (Part 2) Xandir: (skips into the room, all giddy) Oh my God, you guys! I got the part! Foxxy: No kidding. Xandir squeals and does his spin jump. Hero: Yeah, I suppose you’re right, there’s nothing to be afraid of! Foxxy: Exactly! Xandir stops and looks at them. Xandir: Uh, what are you guys doing? Foxxy: Oh, we gots a little itch from them costumes, that’s all. Xandir: Oh my God! Foxxy: Well, congratulations on winning the role, Xandir! Xandir: Not at all, Foxxy! Foxxy: (stops moving against Hero and puts her hands over her ears) I don’t get it….did she get a frog in her throat or something? Xandir: No, it’s not like that. Foxxy: Are you saying she’s disqualified because she done scared you with that bird? Hero: (nervous) What bird? Xandir: No, the producer told me that while I was out cold, she just decided to bow out of the show. Foxxy flashes him an angry look. Xandir: (shrinking from her look) Well, she, uh, hurt her foot. Foxxy: Well…she has a heart, but it ain’t always *that* big! Clara: Oh.

LAN Party Tips: How To Organize an Awesome LAN Party - Flock If you are a serious gamer, then you do not want to skip this post. Who doesn’t love a little clan war during a LAN party? If not properly organized, a night of fun can easily turn into a nightmare. Hours of scheduled fun can turn into hours of troubleshooting hell. No connectivity, not the right sockets or plugs, lack of space and food, uninvited guests – these are just a few of the setbacks that can and will happen. If you are planning to host your own LAN party, then here are some LAN party tips on how to go about it to make your night a hassle-free and enjoyable one. 1. This is something that you want to get right before you begin sending out your invites to your friends. Determine who is coming If you live in a small apartment, you don’t want to be overcrowded, so carefully select who you invite. What equipment is required? One thing that you don’t want to happen on the night is to invite 20 people over when you only have 10 computers. The basic equipment that you need are: 2. Location

Free Astrology Reports and Charts Chaos Astrology Home of the first and still the finest free birth chart readings. This is not just a quick Sun sign horoscope, but a full natal report and astrological chart based on your date, time and place of birth. The following free natal report gives you positions of the planets in the signs and houses, as well as the aspects between the planets in your birth chart. This is my free gift to you. Thank you for your links, likes and shares with others. Create Your Free Report and Chart: 'Think of the history of astrology, which has spread not only in the West, but also to India, China, and to every high civilization.

Alternate Histories: 7 Ways the World Could Be Completely Different Alternate history, long popular with fiction writers, has also been explored by historians and journalists. Here are some of their intriguing conclusions. 1. What if the South won the Civil War? Effect: America becomes one nation again… in 1960. Explanation: In a 1960 article published in Look magazine, author and Civil War buff MacKinlay Kantor envisioned a history in which the Confederate forces won the Civil War in 1863, forcing the despised President Lincoln into exile. 2. Effect: America joins the Nazis. Explanation: Philip Roth’s bestselling novel, The Plot Against America (2002), gives us an alternate history in which Charles Lindbergh, trans-Atlantic pilot and all-American hero, becomes the Republican presidential candidate in 1940, defeating the incumbent Franklin Roosevelt. 3. Effect: The Fuhrer is revered in history as a great leader. Explanation: In Robert Harris’ novel Fatherland (the basis for a 1994 TV movie), Nazi Germany successfully invades Russia in 1942. 4. 5. 6. 7.

1000 Awesome Things - Flock Exploring Realm Dynamics An ancient hermetic axiom states that everything is mind, everything vibrates. Since each living thing is uniquely conscious, each living thing carries a unique vibratory signature. The soul broadcasts a rich spectrum of vibrations, which through the principle of resonance attracts a corresponding spectrum of experiences. Souls of a common frequency share common realms of experience and tend to cross paths in life. This is the study of realm dynamics, how vibrations influence experience, and how experience influences vibration. For instance, realm dynamics explains: Vibration When we speak of vibration, we are really talking about waves with amplitude, frequency, and phase. Soul vibrations are no less tangible than sound waves, though their nature and medium of propagation are more exotic. Nevertheless this field is rife with patterned energy and information—the very stuff of thought and emotion. But how exactly does consciousness manifest experience? The Fractal Hologram Realms

Ralan.com - Home Page Retro delight: Gallery of early computers (1940s – 1960s) | Roya We often think of computers as a very modern phenomenon, but there were actually plenty of computers around 50 years ago. They just weren’t an everyman commodity, instead limited to goverment and corporate use. And they certainly weren’t small. Below we have listed as many as 19 examples of computers from the early days, pioneering efforts that although cutting edge in their day now look lovingly retro. These computers didn’t use the same kind of components as we do today. We have listed the completion year for each computer, although often work on them had begun several years earlier (they were huge projects). Year: 1944 Designed by the legendary German engineer Konrad Zuse, the Z4 was a follow-up to its pioneering predecessor, the Z3 computer he built in 1941 (the world’s first programmable, automatic computing machine). Above: The Z4 computer, as seen in a German museum (in Munich). Colossus Above, top: The Colossus in its heyday. Year: 1946 Above, top: The ENIAC in all its glory.

The Nanotechnology of Sundew and English Ivy | Behind the Scenes | LiveScie... - StumbleUpon This Behind the Scenes article was provided to LiveScience in partnership with the National Science Foundation. Fifteen small sundew plants perch on a windowsill collecting sunlight and eating meat in the lab of Mingjun Zhang on the University of Tennessee's Knoxville campus. Sundew plants are carnivores, consuming insects by capturing them with small adhesive balls on the ends of their tentacles. The tentacles and their adhesive properties may be nature's design for catching insects, but Zhang's research team hopes that one day this same adhesive can help attach your grandmother's replacement hip or your artificial knee without fear that your bodies will reject it. Post-doctoral researcher Scott Lenaghan explained that the idea behind this research at the Nano Bio-systems and Bio-mimetics Lab is to learn from biological principles and apply engineering along the way to develop an end product that uses these compounds and principles to advance technology. Finding organic biomaterials

Bisexualism: Why don't we take it seriously? The acronym "LGBT" can be very misleading for many reasons but none more than the fact it implies that we are all united. Being the "B" in that acronym can be devastatingly isolating. Not only do bisexuals have to deal with homophobia from ignorant hetrosexuals they must also deal with the biphobia that is prevalent in the LGBT community. Talk to anybody about bisexuality and you'll hear a repetitive stream of thinly veiled insults. What is bisexualism? There are said to be 3 categories under the bisexual umbrella; Bi feelings, bi behaviour and bi identity. Then there's "bisexual behaviours" an experimental phase. A lover of souls? Lastly there are those with a bisexual identity. Some are simply not attracted to bisexuals. Sirena Reynolds, Editor

The 10 Oddest Apple-Themed Products [PICS] - Flock Apple fandom has inspired a generation of designers to create products that complement, contrast or clash with design guru Jonathan Ive's cleverly thought out consumer electronics. We've pulled together a list of Apple-themed products — both real and conceptual –- that ooze wit, and celebrate those that nod to the fun side of life in their product designs. If we've missed anything, do let us know your favorite fun Apple-themed object in the comments below. 1. 500XL Giant Earbud Speakers Apple's iconic white earbuds have become a symbol of the iPod, despite the fact that many real music connoisseurs will swap them for a better pair. These speakers then, shaped like gigantic (500 times the size) earphones are a witty audio accessory for your desk. Cost: $60 2. When Steve Jobs unveiled the MacBook Air on stage at Macworld '08 by pulling it out of a manila envelope, the crowd gasped at its slimness. Cost: $34 plus shipping 3. iClooly iPhone Stand Cost: $39 4. iMac Aquariums Cost: $199, plus shipping

the free encyclopedia aphanon_meme: part 292 spells on you And now you're mine! Since this will probably not be maxed before Halloween... HAPPY HALLOWEEN!! And I think I will post a silly little costume contest on Halloween on the meme... not sure exactly what it will involve yet, but it will be there! Enjoy part 292! View flat! *There is a rules page here. *There is a contact post here. *There is a new meme calender you can use for tracking and listing meme events! *If you want to post an image anonymously, please visit this site or manually use this code:

CompTIA The Computing Technology Industry Association (CompTIA), a non-profit trade association, was created in 1982 as the Association of Better Computer Dealers, Inc. (ABCD) by representatives of five microcomputer dealerships. Over the course of a decade, ABCD laid the groundwork for many of CompTIA’s initiatives and member benefits. ABCD later changed its name to the Computing Technology Industry Association to reflect the association's evolving role in the computer industry and in the U.S. business landscape at large. CompTIA is a provider of professional certifications for the information technology (IT) industry. Current certifications[edit] In April 2007, CompTIA's "A+", "Network+", and "Security+" certifications became accredited by the American National Standards Institute. In January 2010 these ANSI/ISO approved certifications fundamentally had their conditions changed from lifetime certifications to certifications that will expire every three years. A+ certification[edit] Network+[edit]