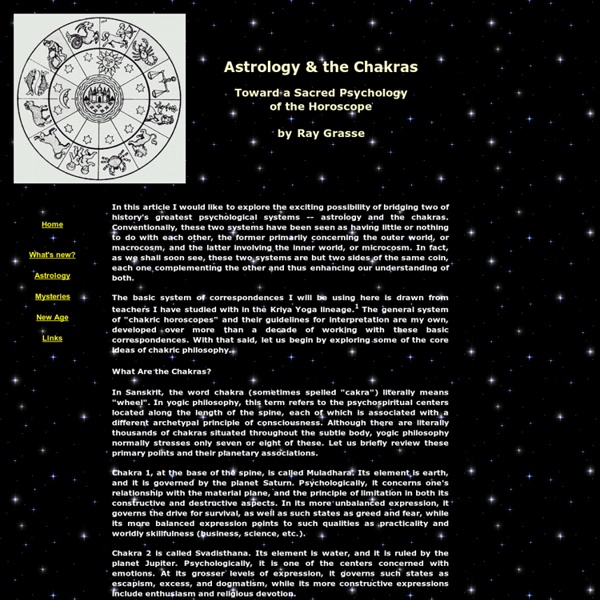 In this article I would like to explore the exciting possibility of bridging two of history's greatest psychological systems -- astrology and the chakras. Conventionally, these two systems have been seen as having little or nothing to do with each other, the former primarily concerning the outer world, or macrocosm, and the latter involving the inner world, or microcosm. In fact, as we shall soon see, these two systems are but two sides of the same coin, each one complementing the other and thus enhancing our understanding of both. The basic system of correspondences I will be using here is drawn from teachers I have studied with in the Kriya Yoga lineage.1 The general system of "chakric horoscopes" and their guidelines for interpretation are my own, developed over more than a decade of working with these basic correspondences. With that said, let us begin by exploring some of the core ideas of chakric philosophy. What Are the Chakras? Chakra 2 is called Svadisthana. References and Notes

Simplified Scientific Astrology, by Max Heindel, HTML Page 1 of 4 by A Complete Textbook on the Art of Erecting a Horoscope Archetypes & Symbols, Crystalinks Archetypes are visual symbols or energetic imprints that exist in our psyches. Some are readily understood while others bring subliminal messages that are there to help you trigger your memory of why you are here and the truth behind the illusion of reality. Archetypes can often convey messages that verbal and written information cannot. Archetypes are found everywhere, as their symbols are a language of the mind, taken to different frequencies of thought and connected to each other by the collective unconsciousness.

Core - The Power of Vibrations “In the beginning was the word.” The Big Bang Theory. What do they each express? The vibration of sound … the primordial sound … the power of vibrations … the life force … the vital spark that shows that living entities are more than a simple collection of chemicals … all this and more. Your New Chakra System In the next stage of your physical body’s shifting reality a realm of many vibrant prismatic colors and dancing energy patterns. Your body’s chakra system can be viewed as an energy pattern of beautiful colors, circling each of its thirteen major energy centers. Imagine glorious combinations of reds, coral-pinks and vibrant light-blues, red-oranges and pale and day-glow greens, dancing together in marvelous ways. Picture each energy center working with every other as one. Before we immerse ourselves in the observation of our chakras, let me briefly describe why this is happening to you. Chakras (or your major energy centers) allow your transforming physical body to integrate its spiritual body and to function properly.

The Message of the Stars, by Max Heindel by Max Heindel and Augusta Foss Heindel Click here for the graphics printed book cover. Click here for the photograph of Max Heindel. An Esoteric Exposition of Natal and Medical Astrology Explaining the Arts of Reading the Horoscope and Diagnosing Disease Table of Contents Maya Magee Sutton: Druid Magic Druid Magic Many people today think that hardly anything is known about the spiritual traditions of our Druid ancestors and believe that the knowledge of them is all but lost; but this is not true. The reality is that there is so much information about Druidry, and there are so many new developments in Druidry, as a living spirituality, that we need guides to help us follow this ancient but ever-new tradition.

Eschatology Eschatology i/ˌɛskəˈtɒlədʒi/ is a part of theology concerned with the final events of history, or the ultimate destiny of humanity. This concept is commonly referred to as the "end of the world" or "end time". Wesak Light Festival Worldwide Meditation Information Worldwide Meditations | How to Call Upon the Great Ones/ Meditation for World ServersMeditation for Changing Times | New Year's Eve Meditation December 31st3 Spring FestivalsFestival of Love | Festival of Light | Festival of Goodwill Worldwide Clock To join in the Wesak Meditation, follow the process on the Wesak Meditations. If you would like more information about Wesak, visit the Legend of Wesak. 7 Tips To Buff Up Your Chakra System Energy medicine promotes healing by working within an individual’s personal energetic field and seeing how it interacts with the larger energy field. We can tell what’s happening with someone by checking in on their 7 main chakras, the centers of energy that run from the base of the spine up through the top of the head. These 7 centers, along with up to 20 smaller chakras, govern our physical, emotional, mental and spiritual health. In other words, chakras hold the secrets to how you feel about yourself and your world, how you get along with others, the condition of your body, your relationship to money, whether or not weight is a problem, how you make decisions, and your spiritual advancement.

The Mother Early years Mirra Alfassa (Paris 21.2.1878 - Pondicherry 17.11.73) was born as the second child of an Egyptian mother and a Turkish father, a few months after her parents had settled in France. An extraordinarily gifted child, who became an accomplished painter and musician, she had many inner experiences from early childhood on. In her twenties she studied occultism in Algeria with Max Theon and his English wife Alma, who was a highly developed medium.

Religion in ancient Rome The religion of Ancient Rome was polytheistic in origin, in line with religious traditions in wider Iron Age Europe. From an early time, however, the Roman Republic was strongly influenced by Hellenistic Greece, and much of the recorded religion of pre-Christian Rome is a syncretism of indigenous with Hellenistic religion. Roman religion was thus practical and contractual, based on the principle of do ut des, "I give that you might give." Religion depended on knowledge and the correct practice of prayer, ritual, and sacrifice, not on faith or dogma, although Latin literature preserves learned speculation on the nature of the divine and its relation to human affairs.