How to Calculate the Sun/Moon Midpoint. Pallas Aspects. Pallas Athene Aspects Pallas Athene conjunct Juno Your primary relationship will be based upon shared cultural values, creativity, intellect and/or professional ties. 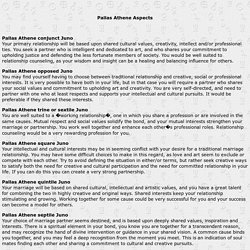 You seek a partner who is intelligent and dedicated to art, and who shares your commitment to upholding justice and defending the less fortunate members of society. You would be well suited to relationship counseling, as your wisdom and insight can be a healing and balancing influence for others. Pallas Athene opposed Juno You may find yourself having to choose between traditional relationship and creative, social or professional interests.

Angularity. In any given area of life, most people are milling around aimlessly, waiting for someone to tell them what to do, and there’s a small minority of people giving all the orders. 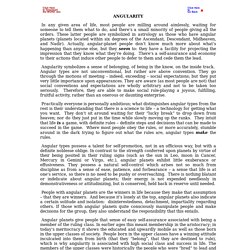 These latter people are symbolized in astrology as those who have angular planets (planets located within six degrees of the Ascendant, Descendant, Midheaven, and Nadir). Actually, angular-planet people don’t know much more about what’s happening than anyone else, but they seem to: they have a facility for projecting the impression that they know what they’re doing. There’s a self-assurance and economy to their actions that induce other people to defer to them and cede them the lead. Angularity symbolizes a sense of belonging, of being in the know, on the inside track.

Angular types are not unconventional, but rather are above convention. Why You MUST Use Midpoints in Astrology. You read it right: not using exact midpoints in astrology is like driving a car without wheels! 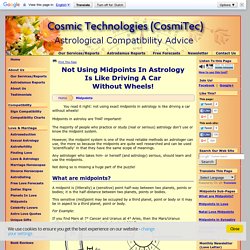 Midpoints in astroloy are THAT important! The majority of people who practice or study (real or serious) astrology don't use or know the midpoint system. However, the midpoint system is one of the most reliable methods an astrologer can use, the more so because the midpoints are quite well researched and can be used 'scientifically' in that they have the same scope of meanings. Any astrologer who takes him- or herself (and astrology) serious, should learn and use the midpoints. Astrological Signs of the Zodiac, Fertile Signs for Planting. The Moon moves through the signs of the Zodiac in the heavens every couple of days. 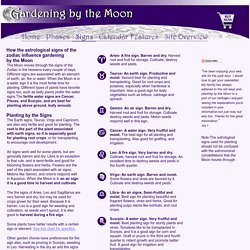 Different signs are associated with an element of earth, air, fire or water. When the Moon is in a water sign it is the most fertile time for planting. Different types of plants have favorite signs too, such as leafy plants prefer the water signs.The fertile water signs are Cancer, Pisces, and Scorpio, and are best for planting above ground, leafy annuals. The Earth signs, Taurus, Virgo and Capricorn, are also very fertile and good for planting. The root is the part of the plant associated with earth signs, so it is especially good for planting root crops, or for transplanting to encourage root development. Air signs work well for some plants, but are generally barren and dry. Tom Jacobs - Astrologer & Channel. In the birth chart, aspects between the true Black Moon and planets and other points tell of the energy dynamics within the person’s energy field. 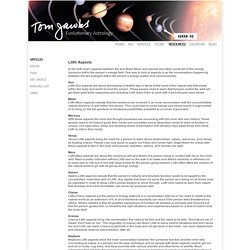 One way to look at aspects is as the conversations happening between the two energies within the person’s energy system and consciousness. Sun Lilith-Sun aspects are about developing a healthy ego in terms of the input of the natural wild that exists within the body and world around the person. These people need to learn that trying to control the wild will get them grief while supporting and directing it will teach them to work with it and become more whole. Moon Lilith-Moon aspects indicate that the emotions are involved in an inner conversation with the uncontrollable natural feminine or wild within the person. This could lead to mood swings and being moody if ungrounded or to living on the full spectrum of emotional possibilities available to a human if grounded. Next: Transits to Lilith. Composite Houses: The Second Quadrant. Unique Study Links Venus to Romantic Choices People Make ‹ Astrology News Service.

Like Ravel‘s musical masterpiece Bolero, the romantic cadence may have soared to an exhilarating crescendo. 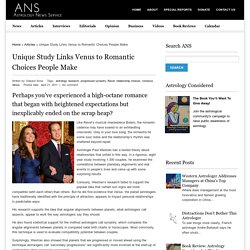 Only in your love song, the orchestra hit some sour notes and the relationship’s rhythm was shattered beyond repair. Astrologer Paul Westran has a tested theory about relationships that unfold in this way. In a rigorous, eight year study involving 1,300 couples, he examined the correlations between planetary alignments and real events in people’s lives and came up with some surprising results.

Relationships and First Meetings: Can You Predict Them? "Ticktock" by What happened on the day you met your husband/wife/lover/life partner? 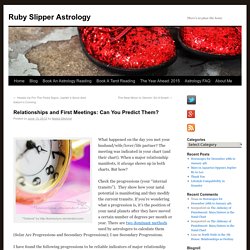 The meeting was indicated in your chart (and their chart). When a major relationship manifests, it always shows up in both charts. Arlene Kramer - Advanced Astrology. Love Asteroids. By C. 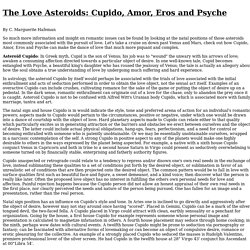 Marguerite Hafeman So much more information and insight on romantic issues can be found by looking at the natal positions of those asteroids most commonly associated with the pursuit of love. Let's take a cruise on down past Venus and Mars, check out how Cupido, Amor, Eros and Psyche can make the dance of love that much more piquant and complex. Asteroid Cupido: In Greek myth, Cupid is the son of Venus; his job was to "wound" the unwary with his arrows of love; awaken a consuming affection directed towards a particular object of desire. In one well-known tale, Cupid becomes entangled with Psyche, a beautiful king's daughter who has roused the jealousy of Venus; the tale is actually an allegory about how the soul obtains a true understanding of love by undergoing much suffering and hard experience. Natal sign position has an influence on Cupido's style and tone. Chiron And Friends - Apollo. It is difficult for me to be too objective about this one because natally I have it in Leo, closely conjunct my Venus, and in mythology Apollo was a Sun god (Sun rules Leo), and also a poet and musician (Venus rules the arts.) 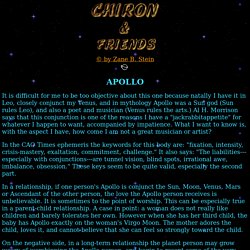 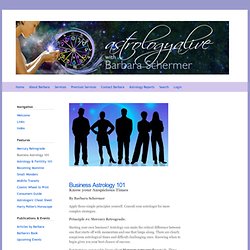 Consult your astrologer for more complex strategies. Tom Jacobs - Astrologer & Channel. Welcome to The Lilith Pages, a new section of my site. I work extensively with the archetype of Lilith via the True Black Moon and asteroid 1181 in astrology charts. The new book Lilith: Healing the Wild tells the complete story of my research into and work with this misunderstood and maligned archetype. Four chapters of my book Living Myth are dedicated to how we live the stories of Lilith in our lives (here), and I even wrote a natal report all about the True Black Moon, which you can order here. Tom Jacobs - Astrologer & Channel. 1000-pcs-mandala-astrology-square-by-schmidt11.jpg (JPEG Image, 900 × 900 pixels) Higher Consciousness. Get Free Sun Moon Midpoint Astrology Reading Online! John Townley's AstroCocktail. "Destiny" by John William Waterhouse (1849-1917) By John Townley Although most astrology software programs include the option of the Vertex in the natal chart, few astrologers actually use it, so there isn’t much written about it.

For the soul walks upon all paths. Arlene Kramer - Uranian Astrology. Astrologer Celeste Teal tells how lunar node transits coincide with life events. Finding themes and patterns suggesting a certain type of event can be relatively easy. But, when it comes to timing an event, we can often use all the help we can get. Astrology: Arabic Parts Astrology Calculator. This is a calculator I built for determining Arabic Parts in astrological calculations.