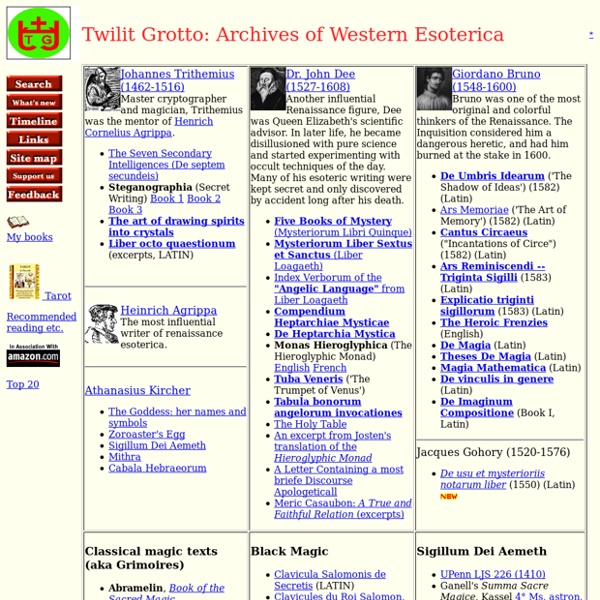 In 1453, Constantinople fell to the Turks, ending the Byzantine empire. This date also marks the beginning of the Renaissance, since the waves of Greek refugees spread knowledge of Greek throughout Europe. Included with the newly available Greek manuscripts were the Corpus Hermetica, Plotinus, and the works of the Neoplatonists. Shortly thereafter in 1492, Isabella and Ferdinand expelled the Jews from Spain. This sent waves of Jewish refugees throughout Europe, spreading knowledge of Hebrew and of the Kabbalah. Renaissance philosophers sought to integrate these traditions with the view of unifying the rapidly disintegrating religious factions and also ending the constant political strife.

The Real Meaning of Egregore The word "Egregore" derives from the Greek word egrégoroi, meaning "watchers," which also transliterates as "Grigori." The word appears in the Septuagint translation of the Book of Lamentations, as well as the Book of Jubilees and the Book of Enoch. Even being derived from the word Grigori, which acquired a somewhat negative aspectation over the time, the general concept of Egregore is not evil. Gaetan Delaforge, in Gnosis Magazine in 1987, defines an Egregore as a kind of group mind which is created when people consciously come together for a common purpose. When a group of people pray and meditate collectively towards an objective, an Egregore of protection and blessing is sent forth, as a circle of Light that shields and safeguards the purpose of the prayers.

Liber Juratus Honorii, or the Sworn Book of Honorius This done, in the middle of the circles, namely in the center, make a pentagram thus: in the middle of which should be the sign 'Tau', thus: , and above that sign, write the name of God El, and underneath this another name of God, namely, Ely, in this fashion: Then, below the uppermost angle of the pentagram, write these two letters: .l.x. And below the other in the right angle, these two: .a.l. Early Church Fathers - Additional Works in English Translation unavailable elsewhere online Early Church Fathers - Additional Texts Edited by Roger Pearse These English translations are all out of copyright, but were not included in the 38 volume collection of Ante-Nicene, Nicene and Post-Nicene Fathers.

Yod Aspect Pattern – Astrology King The Yod aspect pattern is a configuration between at least three planets or points in the horoscope to create a long triangle which looks like a witches hat. A Yod is also called the Finger of Fate, Finger of God or the Projection Triangle, and has been the source of much debate and controversy within the astrological community. Traditional astrologers have dismissed Yod astrology as “bogus” or merely a midpoint structure, and even among those who use Yod’s there is debate about orbs and whether to include only planets or other points in the chart like the Ascendant. I strongly believe that Yod astrology is very significant and does live up to the hype as a very fated aspect pattern denoting a special mission or destiny in life. Yod Astrology Definition

Hebrews And Vedic Brahmins Dr. Samar Abbas, Aligarh, India EDITORIAL, Jul 14 (VNN) A Review In 1979 the Oriental Institute at Baroda published a paper entitled "The Hebrews belong to a branch of Vedic Aryans." This was a follow-up to a previous article on the same topic published by the same author, Prof. Madan Mohan Shukla, in the Vishveshvaranand Indological Journal in 1976. Books and Titles Art | Economics | History | Law | Literature | Music | Philosophy | Political Theory | Religion | Science | Sociology | War and Peace Alphabetical List of all Titles | Liberty Fund Books online These are places to go to if you are looking for books, articles, pamphlets, audio, and other titles:

Sun or Moon Rise/Set Table for One Year Important! Please read the Notes section. This page provides a way for you to obtain a table of the times of sunrise/sunset, moonrise/moonset, or the beginning and end of twilight, for any year between 1700 and 2100. You can obtain a table for any location worldwide by following these simple steps: ENUMA ELISH Sacred-Texts Ancient Near East ENUMA ELISH THE EPIC OF CREATION L.W. King Translator (from The Seven Tablets of Creation, London 1902) A more complete etext of the Seven Tablets of Creation is also available here. Gutenberg On August 26 2020, the Project Gutenberg website underwent some major changes. These changes had been previewed since early 2020, and visitors to the old site were invited to try the new site, including giving input via a brief survey. The old site is no longer available. If you found yourself on this page unexpectedly, it is because an old page was redirected here. Please use the navigation menus at the top of the page to find what you were looking for.

Understanding Vedic Astrology (Exaltation and Debilitation of Planets) - 3 (Blog 4) - RockingBaba Blog Planets, as previously explained in earlier blogs, gives results based on their placement against the Zodiac sign, the Nakshatra and the house they occupy. Each house in a birth chart has a significance. We have given a broad classification of the same in the table below. House Significance Each Zodiac sign has its own characteristics too and a planet can be in a state of exaltation or debilitation or be placed under a friendly sign or an enemy sign. Planet’s result will depend a lot on it placement under a Zodiac sign.