The case for 21st-century learning 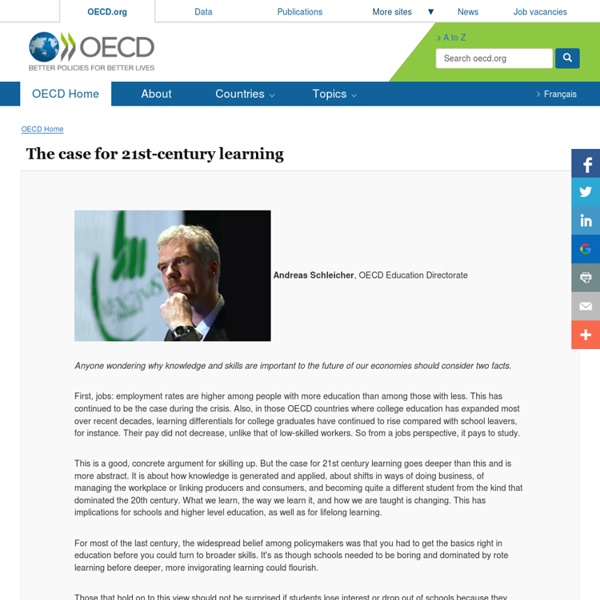 Andreas Schleicher, OECD Education Directorate Anyone wondering why knowledge and skills are important to the future of our economies should consider two facts. First, jobs: employment rates are higher among people with more education than among those with less. This has continued to be the case during the crisis. Also, in those OECD countries where college education has expanded most over recent decades, learning differentials for college graduates have continued to rise compared with school leavers, for instance. This is a good, concrete argument for skilling up. For most of the last century, the widespread belief among policymakers was that you had to get the basics right in education before you could turn to broader skills. Those that hold on to this view should not be surprised if students lose interest or drop out of schools because they cannot relate what is going on in school to their real lives. The knowledge world is no longer divided between specialists and generalists. Related:  jcgonzalez81

Lev Vygotsky Lev Semyonovich Vygotsky (Russian: Лев Семёнович Вы́готский or Выго́тский, born Лев Симхович Выгодский Lev Simkhovich Vygodsky, November 17 [O.S. November 5] 1896 – June 11, 1934) was a Soviet psychologist, the founder of a theory of human cultural and bio-social development commonly referred to as cultural-historical psychology, and leader of the Vygotsky Circle. Vygotsky's main work was in developmental psychology, and he proposed a theory of the development of higher cognitive functions in children that saw reasoning as emerging through practical activity in a social environment. During the earlier period of his career he argued that the development of reasoning was mediated by signs and symbols, and therefore contingent on cultural practices and language as well as on universal cognitive processes. During his lifetime Vygotsky's theories were controversial within the Soviet Union. Biography[edit] Scientific legacy[edit] "Instrumental" period (1920s)[edit] Thought and Language[edit]

21 Characteristics of 21st Century Learners Whether you are a teacher, a parent, an aunt or an uncle, it is important to know that today’s students are wildly different in some ways, from past generations. 21st Century learners… Want to have a say in their education. They’ll respond better when their voices are heard.Often have higher levels of digital literacy than their parents or teachers. They don’t know a world without computers.Expect transparency in their parents, teachers and mentors. They’ll see right through you. Like this post? If you are interested in booking me (Sarah Eaton) for a presentation, keynote or workshop (either live or via webinar) contact me at sarahelaineeaton (at) gmail.com. Like this: Like Loading...

Chapter One: How a Class Becomes a Community: Theory, Method, Examples Chapter One: How a Class Becomes a Community: Theory, Method, Examples Cathy N. Why Does a Class Need Community Rules? What is a course? What is the purpose of the institutions and structures of learning that support and are supported by higher education? Since so much learning takes place in virtual and distributed spaces, it is even more important to ask serious questions about the classroom as a space, the course as a bounded, temporal set of arrangements, the efficacy and importance of face-to-face communication, and the process by which a group of people with a shared purpose can be transformed into a community. What Reading Inspired Our Thinking about the Community Rules of Our Class? To inspire our discussion about the assumptions embedded in the “classroom” as an entity (and perhaps even as embodying an implicit ideology) we began with Yochai Benkler’s influential work “Coase’s Penguin, or, Linux and the Nature of the Firm” (2002). We did not begin with a blank slate. Some History

Vision of learners in the 21st Century Vision Statement May 1996 Submitted to the Training, Research and Evaluation Sub-committee and Executive Committee of the SchoolNet Advisory Board of SchoolNet Français Your comments are most welcomed. May 1996 Modern communication and information technologies are having an increasing impact on learning - how we learn, where we learn, when we learn, what we learn, what learning resources we have, and why we learn. It is important that our learning systems are guided by a vision of learners and of the communities to which the learners belong and which they are helping to create. To open a discussion of these questions, SchoolNet held a workshop on April 19-21, 1996 at the CIBC Leadership Centre in King City, Ontario. The purpose of this Vision Statement is to help SchoolNet build a vision of learners in the 21st Century and the kinds of learning systems needed to support learners and their communities. Characteristics of the Learning Community Characteristics of the Learners The Goal. The Aim.