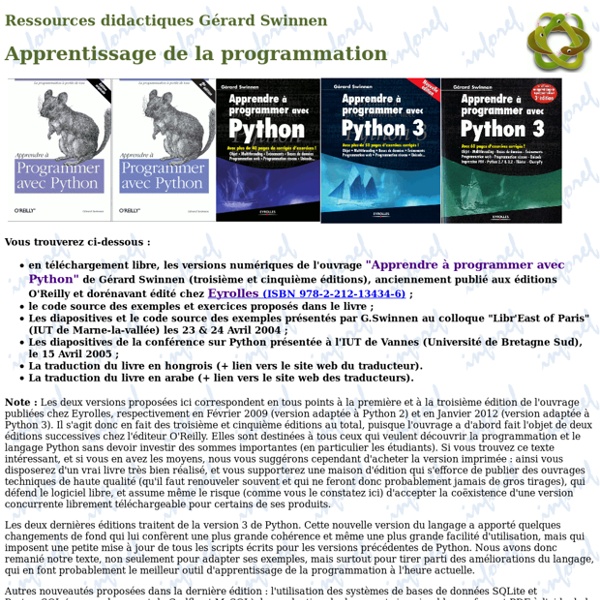 Editors If you have anything to contribute -- e.g. configurations for editors, new editors, or opinion -- don't hesitate to edit or create pages. There's an EditorConfigurationHowto available. Please keep wiki links as wiki links, use external links only if there is no existing page for the editor. Why Python — Pyzo - Python to the people Python is a very-high-level dynamic object-oriented programming language. It’s designed to be easy to program and easy to read. Guido van Rossum started the design of Python in 1980. Over the years, Python has gained popularity in a broad range of fields from web development, games, usage as a scripting language, and of course science and engineering. Guido still plays the lead role in the development of Python and is sometimes referred to as the Benevolent Dictator For Life.

Building a Python Web Application, Part 1 Edit: I've cleaned up the longer example, using Python's string.Template module for the templates. I've also set up a git repo for the source that will go along with posts to this series: Python Webapp Gitweb Recently, I've been interested in writing web applications in Python, and one of the fun things that I discovered was the Python Web Server Gateway Interface, which is a standard interface for Python web servers, web applications, and something called middleware which can sit between the two. One of the coolest things about WSGI is the fact that you now don't have to decide on a specific web server before you start coding. In fact, the Python wsgiref module comes with a built-in simple web server which allows you to start coding up your web application with nothing but a bare install of Python 2.5 (or higher, of course)! There are plenty of overviews of WSGI out there, so I won't bother creating yet another in-depth explanation.

Index of /~alabarre/teaching Index of /~alabarre/teaching Name Last modified Size Description Parent Directory - Aptana Studio — Advanced Python 0.3 documentation Aptana Studio is an IDE - integrated development environment - based on the Eclipse framework. It provides powerful tools for exploring, understanding, and refactoring your code. Because Aptana Studio is Eclipse + a plugin, in class I may refer to “Aptana” and “Eclipse” interchangeably. Unless explicitly noted, both terms refer to the combination of Eclipse framework + Aptana Studio plugin. Aptana’s Python support was formerly a separate Eclipse plugin called PyDev. doctest, unittest, and python 2.4's cool doctest.DocFileSuite Doctest and unittest are like 2 extremes of testing your python code. One is simple and intuitive and the other is powerful and requires more formality. In Python 2.4, doctest, builds in some of the power of unittest, perhaps bridging the gap between the two.

WebFrameworks A Web framework is a collection of packages or modules which allow developers to write Web applications (see WebApplications) or services without having to handle such low-level details as protocols, sockets or process/thread management. The majority of Web frameworks are exclusively server-side technology, although, with the increased prevalence of AJAX, some Web frameworks are beginning to include AJAX code that helps developers with the particularly tricky task of programming (client-side) the user's browser. At the extreme end of the client-side Web Frameworks is technology that can use the web browser as a full-blown application execution environment (a la gmail for example): see Web Browser Programming for details. Generally, frameworks provide support for a number of activities such as interpreting requests (getting form parameters, handling cookies and sessions), producing responses (presenting data as HTML or in other formats), storing data persistently, and so on.

cx_Freeze About cx_Freeze cx_Freeze is a set of scripts and modules for freezing Python scripts into executables, in much the same way that py2exe and py2app do. Unlike these two tools, cx_Freeze is cross platform and should work on any platform that Python itself works on. It supports Python 2.7 or higher (including Python 3). Download/Install Version 5.0.2, released May 20, 2017 Labs Codecademy Labs is a place for you to program in Ruby, Python, and JavaScript online without downloading a code editor or IDE. Share your programs with friends and use your knowledge from Codecademy lessons! Want to learn more about these languages? Sign up for Codecademy to take lessons in JavaScript and to be notified when Python and Ruby lessons are online. Create an account