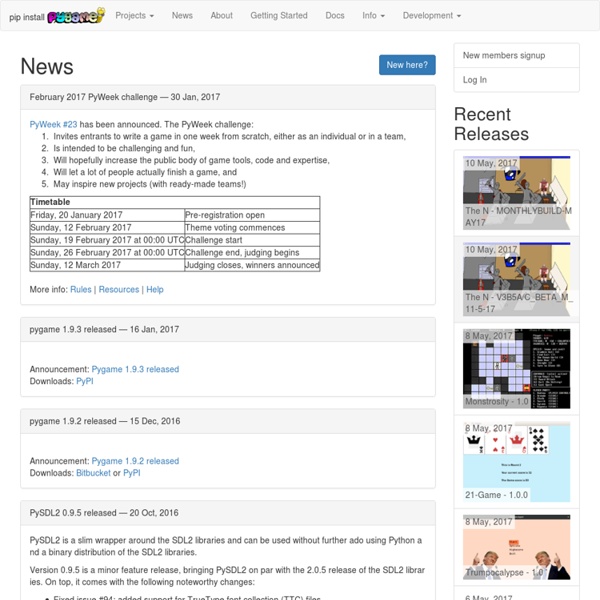 News pyglet 1.2.3a2 - May 12, 2015 PyPy 2.5 released - Feb 5, 2015 PyPy 2.5 has been released. PyPy is an implementation of a large subset of the Python (2.7) language. PyPy features a just-in-time compiler that compiles Python code into machine code at run time to increase the execution speed of Python scripts compared to CPython (in most cases). Related projects: Blender 2.73a released - Feb 5, 2015 The Blender Foundation has released Blender 2.73a, an open-source 3D modeling tool with a Python-scriptable game engine. October 2014 PyWeek challenge results - Oct 30, 2014 The results of the October 2014 PyWeek challenge have been tallied. Individual category winner: Legend of Goblit by Daniel Pope (mauve)Team category winner: The Forgotten Angel by Universe Factory 19, which is Christopher Night (Cosmologicon) and marybee Announcing SplatGL - Oct 30, 2014 Michael Long has released the code for his Splat Graphics Library. SplatGL is still under development, and its API is still evolving. Mike C.

pyquery pyquery allows you to make jquery queries on xml documents. The API is as much as possible the similar to jquery. pyquery uses lxml for fast xml and html manipulation. This is not (or at least not yet) a library to produce or interact with javascript code.

s Python Class - Google for Education Welcome to Google's Python Class -- this is a free class for people with a little bit of programming experience who want to learn Python. The class includes written materials, lecture videos, and lots of code exercises to practice Python coding. These materials are used within Google to introduce Python to people who have just a little programming experience. The first exercises work on basic Python concepts like strings and lists, building up to the later exercises which are full programs dealing with text files, processes, and http connections. The class is geared for people who have a little bit of programming experience in some language, enough to know what a "variable" or "if statement" is. Beyond that, you do not need to be an expert programmer to use this material.

web2py I believe that the ability to easily build high quality web applications is of critical importance for the growth of a free and open society. This prevents the biggest players from monopolizing the flow of information. Hence I started the web2py project in 2007, primarily as a teaching tool with the goal of making web development easier, faster, and more secure. Over time, it has managed to win the affection of thousands of knowledgeable users and hundreds of developers. TextBlob: Simplified Text Processing — TextBlob 0.6.0 documentation Release v0.8.4. (Changelog) TextBlob is a Python (2 and 3) library for processing textual data. It provides a simple API for diving into common natural language processing (NLP) tasks such as part-of-speech tagging, noun phrase extraction, sentiment analysis, classification, translation, and more. TextBlob stands on the giant shoulders of NLTK and pattern, and plays nicely with both.

Learn Python This exercise has no code. It is simply the exercise you complete to get your computer to run Python. You should follow these instructions as exactly as possible. For example, Mac OS X computers already have Python 2, so do not install Python 3 (or any Python). Go to with your browser, get the Notepad++ text editor, and install it. You do not need to be the administrator to do this.Make sure you can get to Notepad++ easily by putting it on your desktop and/or in Quick Launch.

10 Free Python Programming Books Below is a collection of 10 great Python programming books that are available online in full, completely free of charge: Dive into Python This is a fantastic book that is also available in print . It covers everything, from installing Python and the language's syntax, right up to web services and unit testing. The Python Wiki Python is a great object-oriented, interpreted, and interactive programming language. It is often compared (favorably of course ) to Lisp, Tcl, Perl, Ruby, C#, Visual Basic, Visual Fox Pro, Scheme or Java... and it's much more fun. Python combines remarkable power with very clear syntax. It has modules, classes, exceptions, very high level dynamic data types, and dynamic typing. There are interfaces to many system calls and libraries, as well as to various windowing systems . New built-in modules are easily written in C or C++ (or other languages, depending on the chosen implementation ).

The Python Tutorial — Python 3.4.1 documentation Python is an easy to learn, powerful programming language. It has efficient high-level data structures and a simple but effective approach to object-oriented programming. Python’s elegant syntax and dynamic typing, together with its interpreted nature, make it an ideal language for scripting and rapid application development in many areas on most platforms. The Python interpreter and the extensive standard library are freely available in source or binary form for all major platforms from the Python Web site, and may be freely distributed. The same site also contains distributions of and pointers to many free third party Python modules, programs and tools, and additional documentation.

Passing the torch of NumPy and moving on to Blaze I wrote this letter tonight to the NumPy mailing list --- a list I have been actively participating in for nearly 15 years. Hello all, There is a lot happening in my life right now and I am spread quite thin among the various projects that I take an interest in. In particular, I am thrilled to publicly announce on this list that Continuum Analytics has received DARPA funding (to the tune of at least $3 million) for Blaze, Numba, and Bokeh which we are writing to take NumPy, SciPy, and visualization into the domain of very large data sets. This is part of the XDATA program, and I will be taking an active role in it. Turtle examples Introduction My very first introduction to programming was in middle school during the first week of class. My teacher explained that we’d be learning a programming language called “Logo”, which would let you control an imaginary “turtle” with a pen attached to its tail to draw pictures and packets. We were then given a thick packet of examples, and was set free to experiment and do whatever we liked as long as we completed a certain number of exercises each day. I’m not sure how much I ended up actually learning, since I was mostly blindly copying and tweaking code, but I do remember to this day having a huge amount of fun playing with Logo.