Easy as hell pizza balls by ~1stFrostfirewolf on deviantART 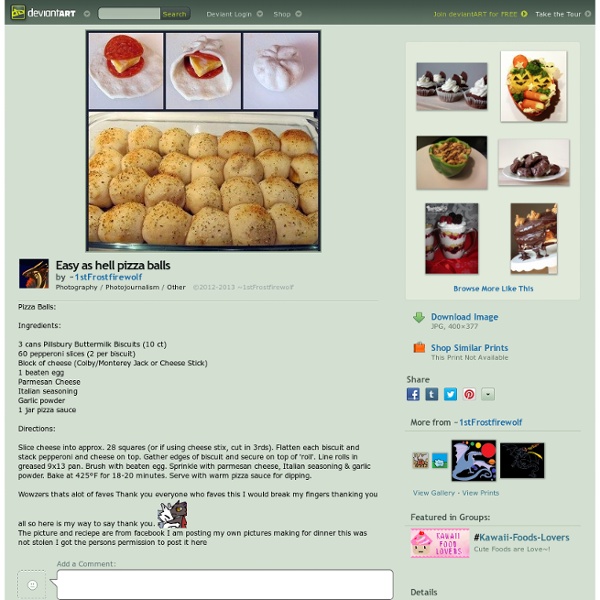 Nutella & Peanut Butter Graham Bars with Chocolate Frosting I love peanut butter. And I love Nutella. Two great loves of my life. Multiple Choice Zombie Apocalypse Survival Game You really aren't awake yet. You never are until at least your second cup of coffee, and this is only your first. You're having a hard time getting your eyes to focus. But it certainly looks like there's a man in your front yard, crouched down on all fours, gnawing at a leg. A human leg.

Broccoli Cheese Soup: Panera Bread Copycat Recipe On Wednesday my sister and I volunteered to make the soup supper to go with the Advent service at church. Before you go thinking I'm some kind of charitable, goodhearted soul, I must tell you that the only reason that I do it is because I LOVE COOKING. In case you hadn't figured that out yet. Harry Potter recipes: Snacks, desserts and drinks inspired by the books and movies View full sizeyotaPeppermint Toads created by Instructables.com member yota. Harry Potter mania comes to a head this week as "Harry Potter and the Deathly Hallows: Part 2" is released Friday in theaters nationwide. The film is the last of eight films based on the seven-book fantasy series by British author J.K. Rowling that's produced sales of around 450 million books worldwide.

Foodbuzz 24, 24, 24: Chinese Buffet at Home It is no secret that I have an obsession with Chinese cuisine. The place that started it all was a local Chinese buffet here in Michigan. After frequent visits to the buffet over the years, I finally decided to take a stab at cooking my own Chinese dishes at home. The majority of the dishes were delicious and I began cooking different Chinese meals every week, but I had always wanted more variety just like the buffet. I had always wondered, “what if I could create a Chinese buffet at home?” I have wanted to do this for along time so I was very excited when I was chosen to be part of the 24,24,24 event presented by Foodbuzz.

Armadillo eggs recipe Once a year, a reader shoots me an email asking when I’ll be writing about armadillo eggs. At first I said, “Uh, armadillos are mammals—they don’t lay eggs!” But soon I realized that he was talking about a certain jalapeño appetizer. Unfortunately, however, writing about armadillo eggs isn’t as simple as it may appear, as there are several different thoughts about what this finger food should be. 30 game scripts you can write in PHP, Part 1: Creating 10 fundamental scripts Getting started As both a game master/storyteller and a developer, I frequently find myself writing little utilities and scripts to help me when running, planning, and playing games. Sometimes I need a quick idea. Other times, I just need a whole pile of names for Non-Player Characters (NPCs). Occasionally, I need to geek out on numbers, work out some odds, or integrate some word puzzles into a game.

Crispy Baked Spicy Pumpkin Wontons Sadly, I haven’t always been kind to pumpkins. Quickly dismissed as something to be decorated and displayed, while other squashes make the cut and are happily cooked and eaten. That all changed last year when I tried pumpkin curry for the first time at a Thai restaurant. I had an epiphany; pumpkin is yummy in a savory dish.