The 10 Best BBQ Spots In NYC: Gothamist. New York might not have the same native barbecue chops as, say, Dallas or Kansas City, but that doesn't mean we don't take our smoked meats seriously. 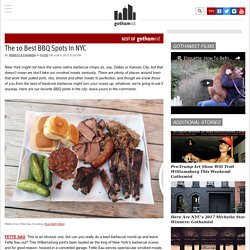 There are plenty of places around town that work their pulled pork, ribs, brisket and other meats to perfection, and though we know those of you from the land of hardcore barbecue might turn your noses up, whatever, we're going to eat it anyway. Here are our favorite BBQ joints in the city; leave yours in the comments. FETTE SAU: This is an obvious one, but can you really do a best barbecue round-up and leave Fette Sau out? This Williamsburg joint's been lauded as the king of New York's barbecue scene, and for good reason: housed in a converted garage, Fette Sau serves spectacular smoked meats by the pound, like pulled pork shoulder ($16/lb), loin chops ($20/lb) and boneless beef ribs ($4.75-$19). For sides, get the baked beans ($5.25 for a small, $8 for a large), but they're pretty meaty themselves, so consider yourself forewarned.

Post Office. 13 Restaurant Cocktails That Don’t Suck. 14 Restaurants Where It’s Better to Sit at the Bar. Momofuku Milk Bar Soho Opens Tomorrow. Band of Outsiders creative director and confessed cookie addict Scott Sternberg opened his first American store two weeks ago in Soho, which is great, but truth be told we're just a bit more excited about the little corner he carved out and walled off for his friend and erstwhile collaborator Christina Tosi, the inventor of Sternberg's very favorite cookie (a toss-up, he has said, between the corn and the blueberry & cream). 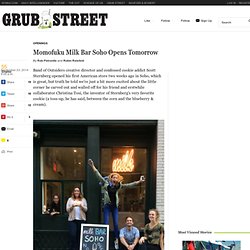 The new shop is adjacent to the Band of Outsiders store. Starting tomorrow, all manner of Milk Bar treats, from Crack Pie to bagel bombs, will issue forth from a Wooster Street takeout window. Though this particular Milk Bar outpost — New York's sixth, not counting seasonal outdoor markets — has no interior space for lingering, it does have one exclusive soft-serve flavor: salty pistachio, first introduced when Tosi launched the cult bakery in 2008. 10 Excellent Places to Get Apple-Cider Doughnuts in NYC, Without the Drive Upstate. Sure, autumn means pumpkin spice (so much pumpkin spice), but it also means apple-cider doughnuts, the seasonal speciality that Grub Street most looks forward to. 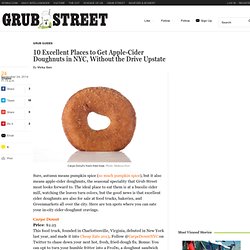 The ideal place to eat them is at a bucolic cider mill, watching the leaves turn colors, but the good news is that excellent cider doughnuts are also for sale at food trucks, bakeries, and Greenmarkets all over the city. Here are ten spots where you can sate your in-city cider-doughnut cravings. Carpe DonutPrice: $2.25 This food truck, founded in Charlottesville, Virginia, debuted in New York last year, and made it into Cheap Eats 2013. Follow @CarpeDonutNYC on Twitter to chase down your next hot, fresh, fried-dough fix. Bonus: You can opt to turn your humble fritter into a FroDo, a doughnut sandwich with a scoop of vanilla ice cream in the middle. Peter Pan DonutPrice: $1.10 This beloved Greenpoint standby serves up a predictably great version of the seasonal classic.

Manousheh's Soulful, Satisfying Flatbread. Of all the slice joints that line Bleecker Street and its environs, one of them is not like the rest. 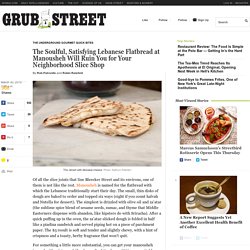 Manousheh is named for the flatbread with which the Lebanese traditionally start their day. The small, thin disks of dough are baked to order and topped six ways (eight if you count halvah and Nutella for dessert). The simplest is drizzled with olive oil and za’atar (the sublime spice blend of sesame seeds, sumac, and thyme that Middle Easterners dispense with abandon, like hipsters do with Sriracha). After a quick puffing up in the oven, the za’atar-slicked dough is folded in half like a piadina sandwich and served piping hot on a piece of parchment paper.