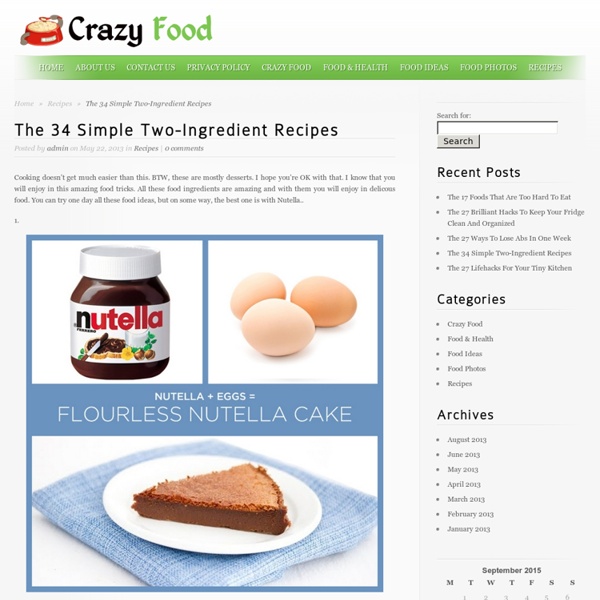 Posted by admin on May 22, 2013 in Recipes | 0 comments Cooking doesn’t get much easier than this. BTW, these are mostly desserts. I hope you’re OK with that. I know that you will enjoy in this amazing food tricks. All these food ingredients are amazing and with them you will enjoy in delicous food.

25 Spectacular Movies You (Probably) Haven’t Seen Midnight in Paris Woody Allen’s latest places starving writer Owen Wilson in Paris with his fiancée, Rachel McAdams. Searching for inspiration for his incomplete novel, Owen begins taking strolls around the city at night where he discovers an unexpected group of people. I wish I could be more specific, but it would ruin the surprise. Know that it is brilliant, witty and full of mystique. 92% on Rotten Tomatoes (RT). Let the Right One In - StumbleUpon How do you make bread even better? You stuff it with pepperoni and cheese. Then, you bake it in a bundt pan that allows you to pull off little chunks and dip them in pizza sauce. This is the perfect thing to bring to a party (and I did, where it disappeared quickly!) or to eat during a football game. Or, make it for dinner and serve with a salad.

Best Movies of 2013 May we stipulate that 2013 has been a flat-out, stone-cold, hands-down spectacular year in movies? Which means that many of us are frustrated. After all, the average filmgoer only sees about six films a year. This is being written at a time when there are at least 10 must-see movies in area theaters, not to mention titles that are stacking up in our on-demand queues like backed-up shuttle flights circling Reagan National. And guess what: There are more on the way. Death By Oreo Cupcakes They are probably the best Oreo cakes I have ever tried. A lot of cake's that I have experimented with before are like a vanilla cake with bits of Oreo in them, which didn't really give them enough Oreo flavor. But these were a lot better. I used a dark chocolate fudge cake mix instead of just a regular chocolate cake mix, which went really well with the cookies and gave the cakes just a little more flavor.

The Pioneer Woman Cooks - Ree Drummond Please note: This is one of my all-time favorite recipes. Thank you for listening. But lawsy mercy, ladies and gentlemen. DIY Chan Luu Bracelet My goal this holiday season was to really try my best to make some homemade gifts. So far I’m doing pretty well with my wreath, some burlap covered candles, some personalized coasters and this past weekend I gave a try at some jewelry. You may have noticed how wrap bracelets are everywhere lately. Chan Luu bracelets are extremely popular these days. They come in singles and also in wraps.

Frozen Banana-Peanut Butter-Chocolate Chip Milkshakes You may have heard about one-ingredient ice cream, one of our all-time most popular recipes here at The Kitchn. It's a marvelous trick of a treat, made from frozen bananas that have been whipped furiously into a smooth, dreamy dessert. And yes, it tastes (and scoops) just like soft-serve ice cream. My collection of funny emails from my inbox. Subject: 5 MINUTE MANAGEMENT COURSE Lesson 1: A man is getting into the shower just as his wife is finishing up her shower, when the doorbell rings. The wife quickly wraps herself in a towel and runs downstairs.

Animal Facts You Never Knew Existed (15 GIF'S) EmailShare 7151EmailShare Animals are dope! Animal facts you never knew existed can be both intriguing and almost unnecessary. Regardless, here are a few animal facts in gif format from a wide range of animals including the hippo, dog, giraffe, shark, bear and many more. 50 Things To Grill In Foil : Recipes & Cooking How to make a foil packet: 1. Lay a large sheet of heavy-duty foil or a double layer of regular foil on a flat surface. (Use nonstick foil where noted.) 2. Creative Window Seat Ideas Redesign your window to create a cozy corner to curl up in the sun. What would you wish for? For the second part here Dragon's Kitchen: Witch's Broomstick Cookies Witch's Broomstick CookiesAdapted from Betty Crocker It's that time of year again...time for ghosts and ghouls and monsters to walk among us. That's right, darlings, it's Halloween! Welcome to the #GreatHallowTweet Halloween BlogHop. This was the brain child of the fabulous Renee at Flamingo Musings.