Community Post: 40 Creative Food Hacks That Will Change The Way You Cook 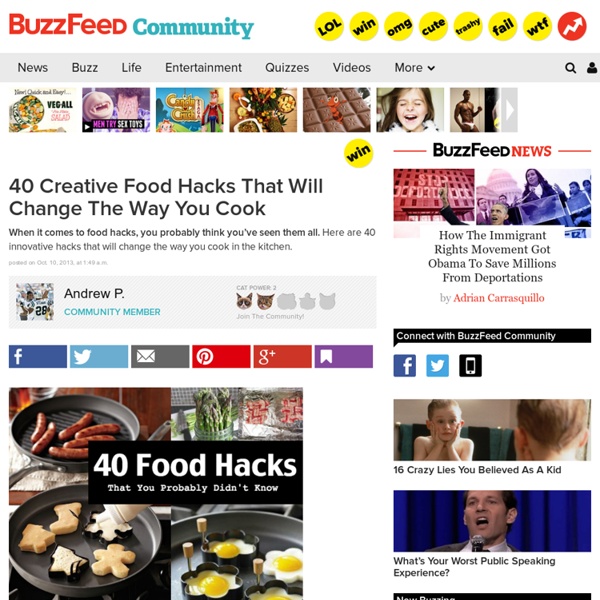 Carbonara - The Food in my Beard I love carbonara. It's fast, simple and cheap, yet very filling, warm and comforting. I generally don't like it when I get it at a restaurant which is surprising to me because it is so easy to make! Today we used bacon rather than pancetta for a few reasons. Eight ancient Roman recipes from Around the Roman Table: Food and Feasting in Ancient Rome Eight recipes from Patrick Faas In addition to a wealth of material about culinary customs and techniques in ancient Rome, Patrick Faas translated more than 150 Roman recipes and reconstructed them for the modern cook. 5 Minute Chocolate Fudge S'mores Mug Cake. Oh hi! Just sharing a s’mores mug cake today. That can be made in 5 minutes. You know… NO BIG DEAL. Since you’re asking, yes… I have always thought the whole “cake in a mug in a microwave” thing was sort of skeevy.

10 of the Spookiest Scary Stories You'll Ever Read SExpand *BBBBRRRRR* Very freaky, but the story I was expecting to find wasn't published. Then again, this was shared last year when our spooky-storytelling was interrupted, sadly, by Sandy. Anyway, y'all remember the story about the woman whose mother was very artsy? Everest Home Improvements Despite what modern cooking shows might tell you, whipping up a gourmet meal isn’t just a case of slicing, dicing and measuring ingredients before throwing them into a pan. You can’t just turn the oven on and gaze wistfully out of your Everest windows until it emerges perfectly cooked. It takes a lot of knowledge and preparation to be a whizz in the kitchen, which is why Everest Home Improvements have produced this Kitchen Cheat Sheet to help you on your way to your first Michelin star! Save it, Print it & Stick it on the fridge

Hasselback Garlic Cheesy Bread Hasselback Garlic Cheesy Bread First thing: this Calphalon Giveaway ends on Friday! Enter enter enter! Second thing: this bread is the bomb. Last week, I got some evil Kerrygold Samples in the mail. Authentic Mexican Recipes Traditional Food Blog Traditional home-style meals from Mexico. Mexican food recipes presented in an easy, step-by-step process so that you can cook an authentic Mexican meal in your own kitchen; each post also adds a little background about the history of the recipe and the region of the country where it originated. You can reach me at: Mely Martinez

How to Bake a Potato: Three Easy Methods As long as there are a few potatoes in the pantry, I know that I have at least one option for dinner. Whether topped with a simple pat of butter or a scoop of hearty chili, baked potatoes are a favorite no-brainer meal when I just want something easy and warm. Here are three different ways to make them. 6 Simple Rituals To Reach Your Potential Every Day It’s Tuesday morning at 8 a.m. Two San Francisco entrepreneurs are pitching their ventures to potential investors today. They’d both agree that this is one of the most important days of their lives. This is the story of Jane and Joe...