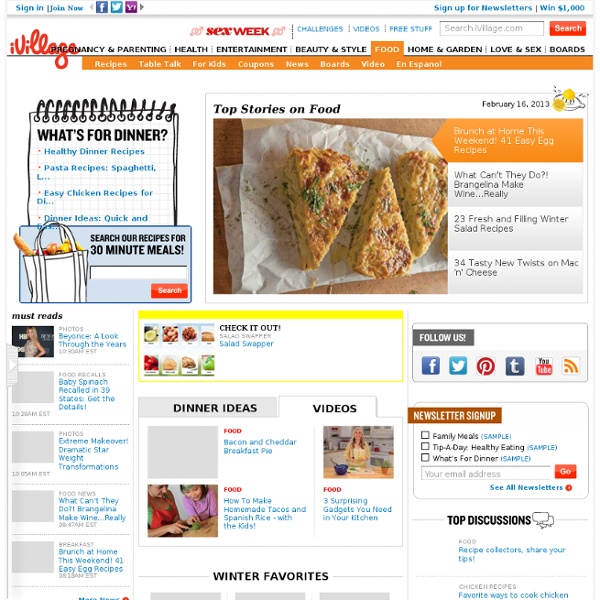 10 Gourmet Meals For $10 or Less photo: 10buckdinners.com Eating cheap is easy. Given $10 to buy ingredients for a meal for four, even the most hopeless home cook could whip up grilled cheese and tomato soup or a simple spaghetti-and-meatballs combo. Kitchen Helpers I found these helpful charts last week and just had to share! Both of these beauties are from Chasing Delicious (aka one of the most fab foodie blogs out there)! Aren’t they faaaaabulous?! Buy them here. (Note: There are lots of little charts like this online, but these are my favorites). I love tea, but I’m no expert. Chocolate Cheesecake Cake Chocolate Cheesecake Cake You know how some people really don’t get along well with their In-Laws? How visits with them are stressful and awkward and generally awful for many people? Yeah, not me. I got kinda lucky on that whole “in-law” thing.

Baked Egg Boat recipe - StumbleUpon Breakfast is my favorite meal. I like to drink iced coffee and watch the cream climb its way down the chunky ice cubes in a dazy before the caffeine hits. I like to order bacon with whatever I’m eating. Scalloped Hasselback Potatoes “Scalloped” is an attractive word, isn’t it? When I hear it I think of several things: first, there’s scallops, as in the seafood—totally delicious. Then there’s the scalloped shape that can live on the edge of a pair of shorts or on the collar of a woman’s blouse—always pretty and dainty.

Foodbuzz 24, 24, 24: Chinese Buffet at Home It is no secret that I have an obsession with Chinese cuisine. The place that started it all was a local Chinese buffet here in Michigan. After frequent visits to the buffet over the years, I finally decided to take a stab at cooking my own Chinese dishes at home. The majority of the dishes were delicious and I began cooking different Chinese meals every week, but I had always wanted more variety just like the buffet.

Global Food Disparity: A Photo Diary In an increasingly globalized world, it’s still sometimes shocking to see just how disparate our lives are compared with other human beings around the world. A book of photographs by Peter Menzel called "Hungry Planet: What the World Eats" ("©Peter Menzel www.menzelphoto.com. Ten Speed Press, published in 2005) makes a relevant point with great irony: at a time when hundreds of millions of people don't have enough to eat, hundreds of millions more are eating too much and are overweight or obese. In observing what six billion eat for dinner the authors note, "Today, more people are overweight than underweight." Get Cooking with Free Online Learning Resources Reading an unfamiliar recipe can be frustrating: What steps, exactly, do you take to butterfly a chicken? How small is a fine dice? When the recipe says, “cook until browned,” just how brown should it be? Cooking lessons can give you clarity on all those questions, and impart skills to improve your kitchen abilities.