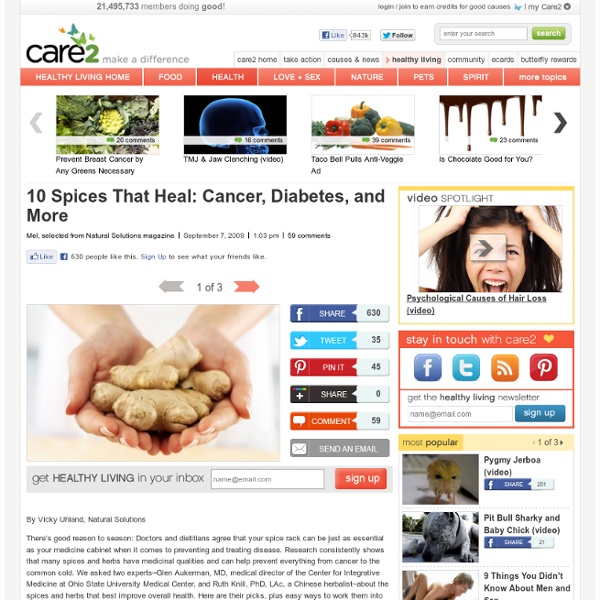 By Vicky Uhland, Natural Solutions There’s good reason to season: Doctors and dietitians agree that your spice rack can be just as essential as your medicine cabinet when it comes to preventing and treating disease. Research consistently shows that many spices and herbs have medicinal qualities and can help prevent everything from cancer to the common cold. Cumin: Prevents Cancer HOW IT WORKS: It’s no surprise to many spice researchers that cancer rates are lower in India, where cumin is a diet staple. Ginger: Calms Nausea HOW IT WORKS: Chinese medical texts dating back to the fourth century BC tout ginger’s antinausea properties, and modern clinical studies offer scientific proof that it works–a substance in ginger shuts down a nerve receptor in the body that triggers the vomiting reflex. Basil: Combats Colds HOW IT WORKS: Basil is rich in antioxidants, which help boost immunity. Next: Diabetes, Memory, Cholersterol and Blood Pressure

Cayenne Pepper Cures 07/07/2011: John Garber from Twin Falls, Idaho, Id Usa : "Dear Sirs: Can you tell us where we can buy 10 pounds of whole African Bird Peppers? And for how much? Thank you, John Garber" Replies 03/10/2012: Andy from London, Uk replies: "I make Cocoa which has a lot of health properties. 10/05/2012: Saydieauntie from Greenville, Sc replies: "I have recently come across this website and am very excited to begin a cayenne tea as I have a family history or bad heart health. 10/06/2012: Mmsg from Somewhere, Europe replies: "Sadieauntie, start small, with very little." [ YEA ] 06/21/2009: Geri from Dothan, Alabama : "Cayenne pepper effects on heart racing and arrythmia... I have been using cayenne pepper for several months for racing heart and arrythmia. [ YEA ] 02/13/2011: Kolin from Nottingham, England replies: "Yesterday I had, unusually while awake, a strong episode of atrial flutter, my chest felt like a washine machine full of golf balls! [ WARNING! [ WARNING! advertisement

Curcumin / Tumeric 10 magical spices Fat-burning, anti-ageing, breath freshening, antiseptic… many spices have surprising and truly magical virtues... © Thinkstock But do be careful not to get too much of a good thing and overdoing it, as some of them are very powerful… they are to be used in medicinal doses. Take a little tour on our culinary spice route and learn how to spice up your life! Fat-burning spice: chilli Virtues: Chillies (like pepper and mustard) sting and burn the mouth, but not only. Soothing spice: vanilla Virtue: Vanilla is known for both its soothing and stimulating virtues. Anti-ageing spice: turmeric Virtues: Generally, all spices contain high quantities of anti-oxidants, but turmeric’s power is even higher. Anti-bloating spice: aniseed Virtues: The star aniseed helps to fight against bloating, and facilitates digestion. Anti-cold spice: cinnamon Virtues: Cinnamon has many qualities, in particular anti-viral and antiseptic virtues. Anti-inflammatory spice: liquorice Fresh breath spice: coriander Jessica Xavier

20 Health Benefits of Turmeric Last updated on September 4, 2015 Over the years, researchers have been learning more and more about the health benefits of turmeric and its active component, curcumin. It’s been eight years since we first published the 20 Health Benefits of Turmeric and I decided that it’s time for an update with links to the latest studies. Turmeric has been used for over 2500 years in India. One thing to take note of is that research has found that consuming black pepper with curcumin increases its bioavailability. BRAIN TUMORS One of the biggest health benefits of turmeric is in the prevention and treatment of cancer. PROSTATE CANCER One study found that turmeric, when combined with cruciferous vegetables, may prevent prostate cancer and stop or slow the growth of existing prostate cancer. SKIN CANCER A study found that curcumin caused melanoma cells to commit suicide. LEUKEMIA Curcumin was found to have an inhibitory effect on WT1 gene expression in childhood leukemia cells. H.

Turmeric Extract Sayer Ji, ContributorActivist Post Millions take non-steroidal anti-inflammatory drugs (NSAIDs) daily for arthritis and related inflammatory conditions, but are completely unaware that far safer, and at least as effective, natural alternative already exist -- and are as easily accessible and inexpensive as the spices found in your kitchen cupboard. Human research on the health benefits of turmeric is sparse, mainly due to the lack of capital available to fund expensive clinical trials. The latest human study to clinically confirm turmeric's medicinal value was published in the Indonesian Journal of Internal Medicine in April, 2012 and found the curcuminoid extract of turmeric was able to reduce inflammation in patients suffering from knee osteoarthritis. Researchers compared the effect of a curcuminoid extract to the NSAID drug diclofenac sodium in reducing cycloxygenase -2 (COX-2) secretion by synovial fluid's monocytes in two, randomly divided, groups suffering with knee osteoarthritis.

Thieves Oil Recipes Thieves Oil comes from research about four thieves during the 15th-century plague who used cloves, rosemary, and other aromatics to protect themselves while robbing plague victims. How to use: Diffuse for short periods of time (1/2 hour or less) in the work or home environment. Apply to the bottom of the feet or dilute with a Massage Oil Base for a stimulating massage under the arms and on the chest at the base of the neck. Common Ingredients: Clove (Syzygium aromaticum), lemon (Citrus limon), cinnamon (Cinnamomum verum), Eucalyptus radiata, and rosemary (Rosmarinus officinalis). Here are two recipes for Thieves Oil. Thieves Oil recipes: Equal amounts of eucalyptus, rosemary, cinnamon, clove and lemon. Thieves Oil Courtesy of Caroline Rogers founder of Nutrition Naturally and co-owner of The Tidewater Companion- A Holistic Health Directory and Resource Guide! THIEVES: Clove * Lemon * Cinnamon * Eucalyptus * Rosemary * An Essential Oil blend formulated by Gary Young, N.D.

A Recipe for Turmeric Juice: A Powerful Healing Beverage When I lived in Bali, I fell in love with the Balinese-style turmeric juice, Jamu Kunyit. Turmeric is known to be one of the most powerful healing herbs. It is great for bones and joints as it has anti-inflammatory properties. It prevents metastases from occurring in many different forms of cancer. Turmeric's also a natural liver detoxifier and a kidney cleanser, and it speeds metabolism and aids in weight management. Plus it heals and alleviates conditions of depression, psoriasis, damaged skin, arthritis and more. For these reasons, turmeric is ubiquitous both in Ayurveda and Chinese Medicine. Here's what you'll need to get started: 5-7 inches turmeric 5-7 tamarind 2 lemons raw honey water blender strainer bowl mason jar(s) or other glass jar with lid 1. 2. 3. 4. By this time, you should be able to see the little seeds coming out. 5. 6. 7. 8. 9. Enjoy! Photo Credit: Shutterstock

600 Reasons Turmeric May Be The World's Most Important Herb There is a medicinal spice so timelessly interwoven with the origins of human culture and metabolism, so thoroughly supported by modern scientific inquiry, as to be unparalleled in its proven value to human health and well-being. Indeed, turmeric turns the entire drug-based medical model on its head. Instead of causing far more side effects than therapeutic ones, as is the case for most patented pharmaceutical medications, turmeric possesses hundreds of potential side benefits, having been empirically demonstrated to positively modulate over 160 different physiological pathways in the mammalian body. While no food or herb is right for everyone, and everything has the potential for unintended, adverse side effects, turmeric is truly unique in its exceptionally high margin of safety vis-à-vis the drugs it has been compared with, e.g. hydrocortisone, ibuprofen, chemotherapy agents. Some of the most amazing demonstrated properties include: Source: Green Med Info Related: