(2) Healing Codes for the Biological Apocalypse - Clip 3 of 3. Human Genes Engineered Into Experimental GMO Rice Being Grown in Kansas. Unless the rice you buy is certified organic, or comes specifically from a farm that tests its rice crops for genetically modified (GM) traits, you could be eating rice tainted with actual human genes. 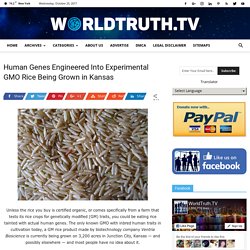 The only known GMO with inbred human traits in cultivation today, a GM rice product made by biotechnology company Ventria Bioscience is currently being grown on 3,200 acres in Junction City, Kansas — and possibly elsewhere — and most people have no idea about it. Since about 2006,Ventria has been quietly cultivating rice that has been genetically modified (GM) with genes from the human liver for the purpose of taking the artificial proteins produced by this “Frankenrice” and using them in pharmaceuticals.

With approval from the U.S. Department of Agriculture (USDA),Ventria has taken one of the most widely cultivated grain crops in the world today, and essentially turned it into a catalyst for producing new drugs. Arsenic in Rice Milk, Rice Krispies, & Brown Rice Syrup. Below is an approximation of this video’s audio content. 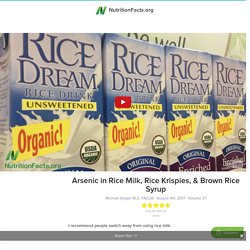 To see any graphs, charts, graphics, images, and quotes to which Dr. Greger may be referring, watch the above video. For kids and teens, the amount of arsenic flowing through their bodies was found to be about 15% higher for each quarter-cup of daily rice consumption. A similar link was found in adults. The Hidden Danger in Almond Milk: Health Hacks- Thomas DeLauer. Grape-Nuts Contain Neither Grapes Nor Nuts. Grape-Nuts is a wheat and barley cereal developed by C.W. 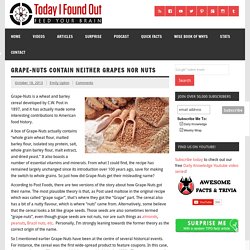 Post in 1897, and it has actually made some interesting contributions to American food history. A box of Grape-Nuts actually contains “whole grain wheat flour, malted barley flour, isolated soy protein, salt, whole grain barley flour, malt extract, and dried yeast.” It also boasts a number of essential vitamins and minerals. From what I could find, the recipe has remained largely unchanged since its introduction over 100 years ago, save for making the switch to whole grains. So just how did Grape-Nuts get their misleading name?

According to Post Foods, there are two versions of the story about how Grape-Nuts got their name. So I mentioned earlier Grape-Nuts have been at the centre of several historical events. More importantly, Sir Admiral Byrd might never have gone to Antarctica if it hadn’t been for Grape-Nuts. Quaker Oats sued over glyphosate found in its 'all natural' oats... the truth is starting to come out about widespread glyphosate contamination of the food supply. (NaturalNews) Quaker Oats, owned by PepsiCo, has been sued over its "all natural" oats containing high levels of glyphosate weed killer (sold as "Roundup" by Monsanto). 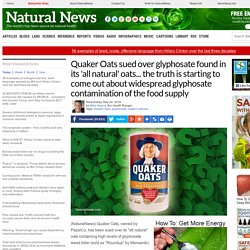 The New York Times, forever a defender of Monsanto and GMOs, is blatantly lying to its readers by claiming the glyphosate found in Quaker Oats is nothing more than "traces. " In reality, the glyphosate contamination of Quaker Oats was tested at alarming levels by a St. Louis laboratory using the ELISA technique. Natural News recently reported those numbers in a previous article. They were also released by the Alliance for Natural Health (ANH-USA.org). Quaker Oats admits that its oats are sprayed with glyphosate by farmers. In a statement, the Quaker Oats Company said that it did not add glyphosate during any part of the milling process but that it might be applied by farmers to certain grains before harvest... The company said it puts the oats it receives through a cleansing process. The NY Times goes on to report: SHOCKING TRUTH ABOUT CEREAL EXPOSED (MUST SEE) 2012. Gluten-free food FRAUD exposed in new Health Ranger video: They're loaded with MSG and GMO.

Over 80 percent of popular bread brands contain cancer-causing chemicals. (NaturalNews) Before you make that next sandwich, you may want to read the list of ingredients on your bread bag label – because there's a very good chance that it may contain carcinogens. 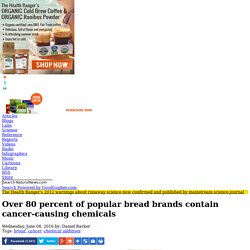 A food additive used in bread called potassium bromate has been in the international news lately. Forbidden Fruits: Whatever Medicinal Foods The F.D.A. Forbids - The Health Wyze Report. Why is Wheat Such a Problem in the Modern Diet? Nearly 500 ways to make a yoga mat sandwich. Thursday, February 27, 2014 By David Andrews, Ph.D., Senior Scientist, and Elaine Shannon, Editor-in-chief and publisher If you’ve planked on a yoga mat, slipped on flip-flops, extracted a cell phone from protective padding or lined an attic with foam insulation, chances are you’ve had a brush with an industrial chemical called azodicarbonamide, nicknamed ADA. 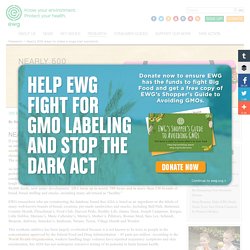 In the plastics industry, ADA is the “chemical foaming agent” of choice. Why 80 Percent of People Worldwide Will Soon Stop Eating Wheat…or Else. Subscribe and get Galactic News Daily Updates: The future of wheat is certain, and it’s toxic. 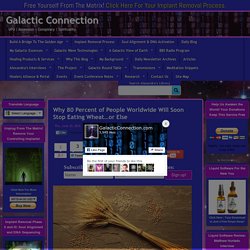 There are as many health risks associated with the consumption of wheat as there are nutritional benefits claimed by the wheat industry. Why is there such a strong emphasis on the development of wheat products all over the world when there are so many adverse and crippling effects such as neurological impairment, dementia, heart disease, cataracts, diabetes, arthritis and visceral fat accumulation, not to mention the full range of intolerances and bloating now experienced by millions of people?

Approximately 700 million tons of wheat are now cultivated worldwide making it the second most-produced grain after maize. It is grown on more land area than any other commercial crop and is considered a staple food for humans. ''Non-GMO'' Cheerios Oats Still Sprayed With Roundup, Supplier Announces. By Sayer Ji General Mills Cheerios may now be "non-GMO" but it is virtually guaranteed to contain Roundup herbicide residues, as disclosed by North America's largest oat supplier. 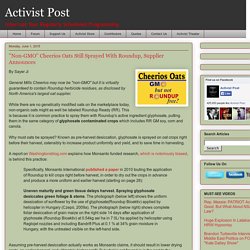 While there are no genetically modified oats on the marketplace today, non-organic oats might as well be labeled Roundup Ready (RR). This is because it is common practice to spray them with Roundup's active ingredient glyphosate, putting them in the same category of glyphosate contaminated crops which includes RR GM soy, corn and canola. Why must oats be sprayed? Your Rice Might Still Contain Shocking Levels of Arsenic - NaturalON. Photo credit: bigstock.com You might have heard this story back in 2012: most rice products contain significant levels of inorganic arsenic. 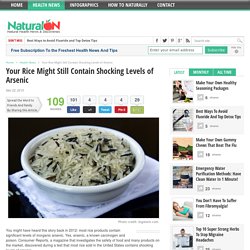 Yes, arsenic, a known carcinogen and poison. Consumer Reports, a magazine that investigates the safety of food and many products on the market, discovered during a test that most rice sold in the United States contains shocking levels of arsenic. The EPA (United States Environmental Protection Agency) states that no amount of inorganic arsenic is safe, but federal limits regarding arsenic only apply to drinking water and not to food. 5 Secrets About White Flour That will Shock You – 5 Secrets About White Flour That will Shock You. New Consumer Report: Just one weekly serving of rice pasta could put your baby at risk for arsenic poisoning. (NaturalNews) A new analysis by Consumer Reports explains how easy it is for infants to consume dangerous amounts of arsenic in common foods like hot rice cereal and rice pasta. 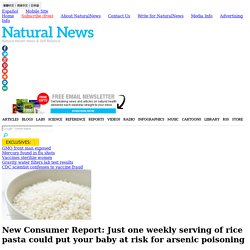 Just one serving of rice pasta can put your child over the recommended weekly limit, according to the new report, which also details safer alternatives for grains including quinoa, buckwheat and basmati rice grown in California. A 2012 investigation by Consumer Reports discovered "significant levels" of inorganic arsenic, a known carcinogen, in a range of rice products including organic, conventional and gluten-free rice. Inorganic arsenic found in most rice products More than 200 rice products were tested, with inorganic arsenic showing up in nearly every "...product category along with organic arsenic, which is less toxic but still of concern.

" Organic arsenic is considered to be less or nontoxic to humans and is naturally occurring within the earth's crust. Despite warnings from the U.S. Sources: Wheat: 200 Clinically Confirmed Reasons Not To Eat It. Dr. Peter Glidden - Against the Grain, Why Gluten is Bad. Study shows synthetic vitamins in 'fortified' breakfast cereals harming children - NaturalNews.com. Monday, July 14, 2014 by: Jonathan Benson, staff writerTags: fortified foods, synthetic vitamins, breakfast cereals (NaturalNews) Breakfast cereals that are "fortified" with synthetic imitations of vitamins like zinc, niacin, and vitamin A could be harming children, says a new report by the Environmental Working Group (EWG). Researchers from the consumer advocacy organization maintain that many cereals, breakfast bars and other breakfast products marketed to children contain excess levels of synthetic vitamins that may harm vital organs and immune function in the longer term.

The investigative report looked specifically at the three aforementioned additives, all of which are synthetically derived when added to breakfast cereals, to see how manufacturers use them. Gluten Intolerant? You May Just Be Intolerant of Monsanto Weed Killer. Published on February 19th, 2014 | by Jason Louv Scientists suggest that Monsanto’s Roundup herbicide is what’s making people have such a nasty reaction to gluten Gluten has been a major news item for the last few years—not just for sufferers of acute gluten intolerance and celiac disease, but for increasing numbers of people who are seeking to eliminate gluten from their diet for general health issues, weight control, skin health and even mood. As cholesterol and carbs once were, gluten is the new enemy, to the point that some have claimed it’s a substance that the body isn’t equipped to handle. Should Wheat Be Reclassified as a Pathogen?

A provocative, though still largely under appreciated study titled, “Parallels between Pathogens and Gluten Peptides in Celiac Sprue,” published in PLoS in 2008 proposed a radically new definition of pathogen be employed to understand the extensively documented harm that the consumption of wheat is capable of doing to human physiology.

The new theory proposes that we move beyond initial 19th century formulation of pathogens as exogenous agents (e.g. bacteria, viruses, fungi) capable of causing disease in susceptible organisms to include dietary exposure to wheat peptides within genetically susceptible susceptible individuals. A New Definition of Pathogenicity That Includes Wheat Obviously, wheat proteins are not capable of self-replication within a susceptible host, as is the case for viruses or bacteria, which makes the new definition different from the conventional view that a pathogen must be a self-replicating infectious organism. The study offers the following revised definition:

Why Eating Wheat and GMOs Will Destroy Your Health. What Grain Is Doing To Your Brain. Processed cereals found to be neurotoxic. Fri. Nov. 8, 2013 by Jonathan Landsman (NaturalHealth365) Processed cereals are sold to parents as a ‘good source’ of fiber, vitamins and minerals. In truth, these neurotoxic food products are loaded with heavy metals, sugar plus artificial ingredients which actually destroy the metabolism and brain function. After reading the rest of this article – you’ll want to find a better way to start your day.