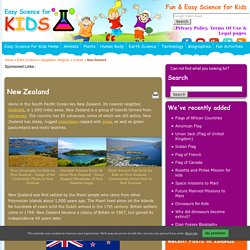 Its nearest neighbor, Australia, is 1,000 miles away. New Zealand is a group of islands formed from volcanoes. The country has 50 volcanoes, some of which are still active. New Zealand has steep, rugged mountains capped with snow, as well as green pastureland and rocky beaches. New Zealand was first settled by the Maori people who came from other Polynesian islands about 1,000 years ago. Easy Science Kids Facts All about New Zealand – National Flag of New Zealand image Because New Zealand is such a remote island, most of the animals that live here are birds that flew here thousands of years ago. 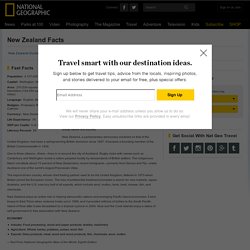 "It is a land uplifted high," wrote Abel Tasman, a Dutch navigator who was the first European to sight New Zealand, in 1642. Snowy peaks, fjord-scarred shores, and pastures dotted with sheep define this country. Indonesia Facts for Kids. Imagine living in a country that’s not just one piece of land, but 17,000 islands. 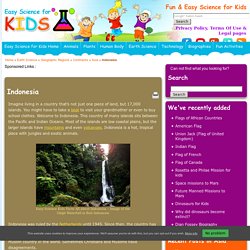 You might have to take a boat to visit your grandmother or even to buy school clothes. Welcome to Indonesia. This country of many islands sits between the Pacific and Indian Oceans. Most of the islands are low coastal plains, but the larger islands have mountains and even volcanoes. Indonesia Facts, Indonesia Flag. Indonesia Facts Flag Map Indonesia is a vast equatorial archipelago of 17,000 islands extending 5,150 kilometers (3,200 miles) east to west, between the Indian and Pacific Oceans in Southeast Asia. 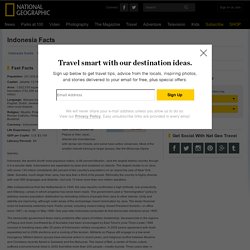 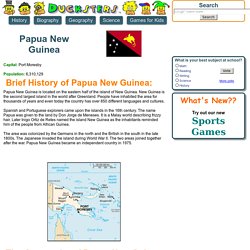 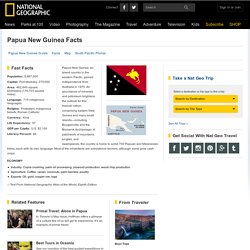 An abundance of minerals and petroleum brightens the outlook for this tropical nation, comprising eastern New Guinea and many small islands—including Bougainville and the Bismarck Archipelago. A patchwork of mountains, jungles, and swamplands, the country is home to some 700 Papuan and Melanesian tribes, each with its own language. Most of the inhabitants are subsistence farmers, although some grow cash crops. Malaysia Facts for Kids. Malaysia lies in Southeast Asia on a peninsula near Thailand, Cambodia and Indonesia. 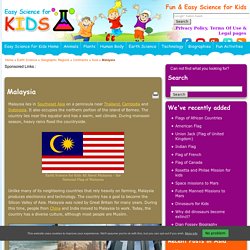 It also occupies the northern portion of the island of Borneo. The country lies near the equator and has a warm, wet climate. During monsoon season, heavy rains flood the countryside. Malaysia Facts, Malaysia Flag. Malaysia Facts Flag Map Comprising the territories of Malaya, Sarawak, and Sabah, Malaysia stretches from peninsular Malaysia to northeastern Borneo in Southeast Asia. 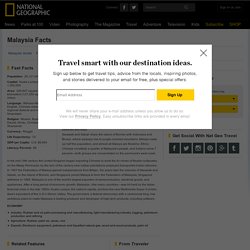 Fiji Islands Facts for Kids. In the South Pacific, you’ll find the Fiji Islands – a group of 333 islands covered with beautiful beaches and rain forests. 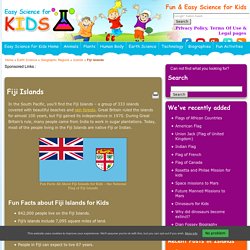 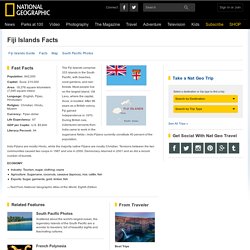 Most people live on the largest island, Viti Levu, where the capital, Suva, is located. After 96 years as a British colony, Fiji gained independence in 1970. Vanuatu. Capital: Port-Vila (on Efate) Population: 256,155 Brief History of Vanuatu: Vanuatu is a small island nation in the South Pacific Ocean. The islands were inhabited for thousands of years prior to being discovered in 1606 by Portuguese explorer Pedro Fernandez De Quiros. Vanuatu Facts, Vanuatu Flag. Tonga Facts for Kids. Tonga, a country made up of 170 islands, lies in the South Pacific Ocean.

Only 36 islands are inhabited by people. The islands have beaches, volcanic mountains and coral reefs. People here grow crops, such as bananas, taro, coconut and papayas. Easy Science Kids All about Tonga – Image of a Coastal Area in Tonga Tonga was settled by Polynesian explorers around 500 B.C. Fun Facts for Kids about Tonga – Image of a Tongan Beach Front Like other Polynesian cultures, Tongans put value on close family relationships and religious observance.

Fun Science Facts for Kids on Tonga – Image of a Royal Palace in Tonga 102,000 people live in Tonga.Tonga has 289 square miles of land.Most people speak Tongan or English.Most people are Christian.People in Tonga can expect to live 68 years.99 percent of adults can read. Easy Science for Kids All about Tonga – National Flag of Tonga Tonga Vocabulary Warship: a boat designed for warPlot: plan, schemeReligious observance: church worship Learn More All about Tonga. Tonga Facts, Tonga Flag. Samoa Facts for Kids. Samoa is a group of nine islands in the South Pacific Ocean known for its beautiful scenery and friendly people. Most of the people who live here are native Samoans whose ancestors came by boat thousands of years ago. Germany ruled Samoa briefly in the early 20th century. After World War I, New Zealand administered Samoa’s government and helped it become independent. Fun Facts for Kids on Samoa – Image of a Waterfall in Samoa Samoa is a peaceful country.

Easy Science Kids Samoa – Aerial View of the Samoan Outline. Samoa Facts, Samoa flag. New Caledonia Facts for Kids. Situated 700 miles east of Australia, New Caledonia is an archipelago, or cluster of islands in the South Pacific Ocean. The main island is 250 miles long and 30 miles wide. It is covered in mountains and rain forests. New Caledonia. Capital: Noumea Population: 260,166 Brief History of New Caledonia: New Caledonia is an island nation located near Australia in the South Pacific. Philippines Facts for Kids. Have you ever wondered how countries, cities and streets gain their names? Sometimes, places are given descriptive names. The Snake River that runs through the western United States was named because it winds like a snake. Many times, locations are named for people.