How To Make An Easy Dress (For Cheap!) 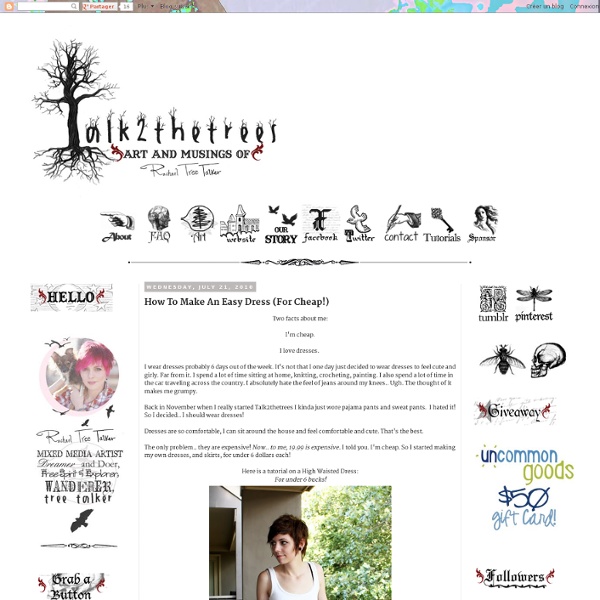 Two facts about me: I'm cheap. I love dresses. I wear dresses probably 6 days out of the week. It's not that I one day just decided to wear dresses to feel cute and girly. Far from it. Back in November when I really started Talk2thetrees I kinda just wore pajama pants and sweat pants. Dresses are so comfortable, I can sit around the house and feel comfortable and cute. The only problem.. they are expensive! Here is a tutorial on a High Waisted Dress: For under 6 bucks! First you will need a ribbed tank top. I got mine from Walmart for 2.50 You could also use a t-shirt 3 yards of matching fabric. Clearance section is my favorite. Cut the tank top almost in half. (I cut mine a little too short.. oops!) For the bottom part of your dress take the fabric and wrap it around your waist about 1 and a half times, and cut in a straight line. I never measure, I never use patterns... Next you fold your fabric in half. You have kind of a big blocky rectangle skirt. We are going to create a ruffle.

How To Make a Headband, Version 3: Easy Ribbon Headband Ribbon headbands secured to elastic ponytail holders. I've seen many headbands lately which use a loop of cord elastic that is cinched at the center, usually by a metal crimp, to form a figure eight (like Anthropologie's Oxford headband, Anthropologie's Fairytale Theater headband, Banana Republic's double ribbon headband, and Santi's metallic headband). This inspired me to use two ponytail holders to achieve a similar effect--because I do not have any metal crimps and neither do you, I presume, and, while we're at it, maybe you don't even have cord elastic. So here it is, an easy headband using minimal supplies that you probably already have at home.

Make a Pink Ruffly Umbrella Home » $5 and Under, cheap crafts, From Our Readers, Headline, Tutorials 22 June 2010 56,461 views 12 Comments by heather In addition to choosing a winner of the CSI Dollar Store Project, I was also able to choose my top 10 projects. It wasn't easy to narrow the top ten down, but all of the top 10 projects were innovative and showed me something I haven't seen before (or cleverly twisted something I have seen before). One of my top tenners, Becky, made a pretty pink ruffly umbrella out of an unlikely material.

Skinny Ties One of Ralph’s requests for his birthday was skinny ties. They are surprisingly hard to find — either too long or too expensive for a 13-year-old’s wardrobe. So a few weeks ago, I had an idea: I would buy some old fat ties at a thrift shop and take them to a tailor to have them altered. Brilliant, right? But then, of course, I forgot about the idea till 3 days before his birthday. Miniature Gardens: Tillandsia Terrariums There is something about small gardens that I find magical. Small gardens, terrariums in particular, have a way of sweeping me off to a day-dreamy place where walnut-shells are used for beds and I become pocket-sized. Making these wee little wonderlands is exceedingly easy. So when I found myself with a surplus of jars, vases, and old candle containers, I immediately set out to create Tillandsia terrariums to give to others, and keep for myself. By using Tillandsia, (air plants as they are commonly known) you can create a very low-maintenance garden with a high reward. Tillandsia do not require any soil to grow, as they get all of their nutrients from the air.

Embroidery + Metal? Here's something I've been noodling around with lately - embroidered metal discs! Wait - what? I bought a bag of these perforated beading discs a while back, intending to make some beaded pieces a la Miriam Haskell. Easy Origami Box Instructions - How to make a Simple Origami Box The origami box is simple to make, and can be used to hold other origami pieces. Or important stuff, like candies. This origami box is also called Masu, which is Japanese for a square wooden box. Follow the step by step photos to make the origami box. Anthropologie Climbing Cowlneck I apologize for the lack of posts. The charger to my laptop is broken so the only access I get is through my phone or at my parents' house. Not to mention I went to Vegas for the weekend with my girlfriends with NO kids WOO HOO! Not using the internet has been pretty nice though I gotta admit, and I realized I've been using the computer way too much and that I should focus on what's more important like relationships with my family. So I don't think I'll be blogging everyday, maybe every other day or so. But guess what!?

Easy Ruffled T-shirt Scarf Today was one of those rare, laid-back Sundays. I was even in my Sunday school class before all my little students, which almost never happens! :o) And since we had no plans after church, I took the opportunity to make this little scarf that popped into my head as I was making lunch. I intended to make it for myself, but I didn't have quite enough material from these two old, ill-fitting shirts of mine, so I made one for Paige! It was so easy.

Recycle Tutorial – Making Of T-Shirt Yarn Another tutorial to help save our Mother Earth by turning unwanted items into something useful. This is the yarn ball I made out of an old T-shirt which I have been wearing for 10 years day-in day-out, wash-in wash-out. It finally broke down and tore at the collar and sleeves. Waste not, want not, I decided to recycle it. I have finished making the drawstring bag as shown above. Please click here to have a look and you can download the simple pattern I created. Wipe Off Weekly Menu Board I am a meal planner. I refuse to go grocery shopping without my week’s worth of meals planned out and list made. (It’s either that or wander aimlessly around the grocery store for two hours and then make ten more trips back during the week to get things I forgot.) Once I get the groceries unloaded, I usually forget what I planned for, so I put together this super easy wipe-off menu board to keep track of what’s for dinner each night! Wipe-Off Menu Board Tutorial Supplies:

how to make a paper flower This is a flower that I put together for a series of projects that I've been working on for the shop. I was going to include it with the Petal Collection, but I decided that this was one worth sharing. It doesn't require any fancy equipment at all!

DIY-how to make a twist-top inspiration this week was this shirt from Anthropologie. I bought this shirt from wal-mart for $4 in XXL. HOWEVER, I thought I would never say this but I think I'm done with ruffles. GASP, I know I know, I'm a ruffle queen and i still love them and will still wear them, but after owning 15+ items with ruffles on it, I think I quenched my thirst for ruffles. for now at least. ;) so my newest craving? knots and twists.

craft blog : My Kanzashi Hairpin My Kanzashi Hairpin Since I first saw Kanzashi on CraftyPod, I've admired them. They are gorgeous! I assumed, though, that they were difficult to make, so I didn't even add them to my list of crafts to explore. But now that I've had a chance to read the instructions in Kanzashi In Bloom and even make my own, I've found that they are simple and quick to make. They give the impression of intricacy, but no *hint* that they are handmade. Adventures in garlanding ? Bookity I made these map garlands as a special request for a customer and they have proved rather popular. The map colours glow in the light – all those blues and green smoosh together into something very pretty. This is the style I call ‘paper onions’. I don’t know what else to call them!