Don't buy into the hype so quickly, do your research first - Patriot Talon: Opinion. Over the summer, there have been three words that have been almost as hot as the sun itself, but in turn, actually send chills down your spine. 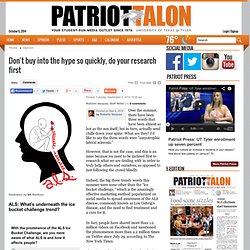 What are they? I’d like to say the three words were “amyotrophic lateral sclerosis.” However, that is not the case, and this is an issue because we need to be inclined first to research what we are dealing with in order to truly help others and ourselves, as opposed to just following the crowd blindly. Indeed, the big three trendy words this summer were none other than the “ice bucket challenge,” which is the amazingly effective marketing method popularized on social media to spread awareness of the ALS disease, commonly known as Lou Gehrig’s disease, and the need to find treatment and a cure for it. In fact, people have shared more than 1.2 million videos on Facebook and mentioned the phenomenon more than 2.2 million times on Twitter since July 29, according to The New York Times.

I am not stating that the ice bucket challenge is stupid or wrong. Our Take: Social media campaigns remiss of core issues - The Red and Black : Views. With 757 million daily users on Facebook, 58 million average Tweets per day and 200 million monthly active users on Instagram, social media is using its foothold in society to revolutionize charities and social awareness campaigns in a negative manner. 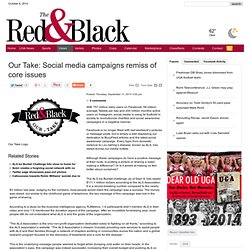 Facebook is no longer filled with last weekend’s pictures or message posts, but is simply a wall displaying our dedication to BuzzFeed articles and the latest social awareness campaign. Every topic from domestic violence to Lou Gehrig’s disease, known as ALS, has swept across our media outlets. Although these campaigns do have a positive message at their roots, is posting a picture or sharing a video making a difference? Or is it aimed at making us feel better about ourselves? Online activism: it's easy to click, but just as easy to disengage. Activism On Social Media. How Political Activists Are Making The Most Of Social Media. Why Social Media Is Reinventing Activism. The argument that social media fosters feel-good clicking rather than actual change began long before Malcolm Gladwell brought it up in the New Yorker — long enough to generate its own derogatory term. 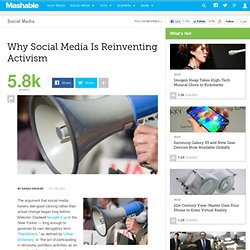 “Slacktivism,” as defined by Urban Dictionary, is “the act of participating in obviously pointless activities as an expedient alternative to actually expending effort to fix a problem.” If you only measure donations, social media is no champion. The national chapter of the Red Cross, for instance, has 208,500 “likes” on Facebook, more than 200,000 followers on Twitter, and a thriving blog. But according to the Chronicle of Philanthropy, online donations accounted for just 3.6% of private donations made to the organization in 2009. RT If You: The Rise in Fake Activism  Will the real activists please stand up? 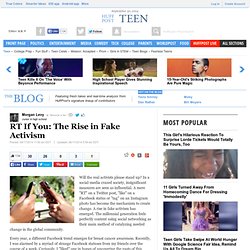 In a social-media crazed society, insignificant measures are seen as influential. A mere "RT" on a Twitter post, "like" on a Facebook status or "tag" on an Instagram photo has become the mechanism to create change. A rise in fake activism has emerged. The millennial generation feels perfectly content using social networking as their main method of catalyzing needed change in the global community. Every year, a different Facebook trend emerges for breast cancer awareness. My 14 choices all had two things in common: they were all completely absurd and did nothing to raise awareness about breast cancer.

Especially on Twitter, fake activism runs rampant. A tweet can get a million retweets, but the chances remain slim that the tweet actually saved somebody's life. Our generation has become apathetic. The world is full of possibilities. One act of kindness at a time, we can build a better tomorrow. Hashtag Activism Is Here to Stay  #Icebucketchallenge #Ferguson. 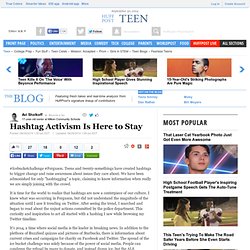 Teens and twenty-somethings have created hashtags to trigger change and raise awareness about issues they care about. We have been admonished for only "hashtagging" a topic, claiming to know information when really we are simply joining with the crowd. It is time for the world to realize that hashtags are now a centerpiece of our culture. I knew what was occurring in Ferguson, but did not understand the magnitude of the situation until I saw it trending on Twitter. After seeing the trend, I searched and began to read about the unjust actions committed by the police department. It's 2014, a time where social media is the leader in breaking news. Without the creation of a video by Pete Frates, and his friends' subsequent sharing of the video, many people would be still be unaware of the ALS disease. For current events stories, your tweeting and and hashtagging will allow others to find out about the issue, and possibly do something about it.

The Limits of Hashtag Activism  For the past two months, my Facebook newsfeed has been spammed with ALS Ice Bucket Challenges. 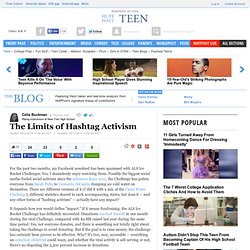 Yes, I shamelessly enjoy watching them. Possibly the biggest social media-fueled social activism since the infamous Kony 2012, the Challenge has gotten everyone from Sarah Palin to Leonardo DiCaprio dumping ice cold water on themselves. There are different versions of it (I did it with a mix of the Clean Water Challenge), different statistics shared in each accompanying status, but does it -- and any other forms of "hashtag activism" -- actually have any impact? It depends how you would define "impact.