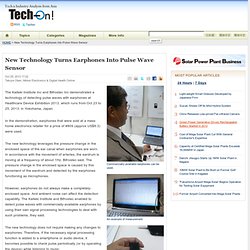 In the demonstration, earphones that were sold at a mass home electronics retailer for a price of ¥809 (approx US$8.3) were used. The new technology leverages the pressure change in the enclosed space of the ear canal when earphones are worn. In accordance with the movement of arteries, the eardrum is moving at a frequency of about 1Hz, Bifrostec said. The pressure change in the enclosed space is caused by this movement of the eardrum and detected by the earphones functioning as microphones. This bracelet could replace your passwords, your car keys, and even your fingerprints. Fingerprint readers. 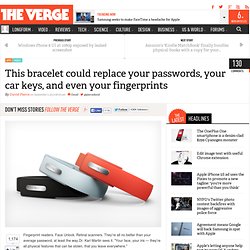 Face Unlock. Retinal scanners. They're all no better than your average password, at least the way Dr. Karl Martin sees it. Qardio Monitors Send Real-Time Stats to Your Doctor. For people with cardiovascular issues, keeping constant track of blood pressure and heart rates is a necessary but often cumbersome task. 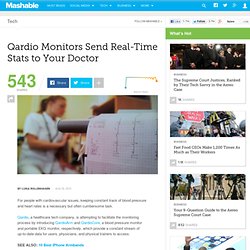 Exclusive: Sleep coach company Zeo is shutting down. Since late last year it has been something of an open secret in some digital health circles that Newton, Massachusetts-based sleep monitoring and coaching company Zeo was winding down its operations and searching for a buyer. 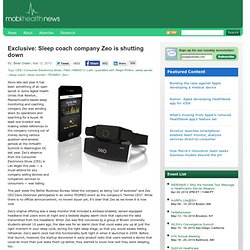 At least one investor was making veiled references to the company running out of money during various question-and-answer periods at the mHealth Summit in Washington DC last year. Zeo’s absence from the Consumer Electronics Show (CES) in Las Vegas this year — a must-attend for any company selling devices and companion services to consumers — was telling. This past week the Better Business Bureau listed the company as being “out of business” and Zeo CEO Dave Dickinson participated in an online TEDMED event as the company’s “former CEO”. Metria Wearable Sensor. Metria™ Informed Health is a portfolio of digital health products being developed by Vancive Medical Technologies™, an Avery Dennison business, to monitor and transmit physiological information for various health, wellness and clinical applications. 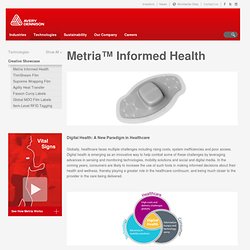 In general, Metria products have three main components to them: Sensing: This is the actual product or device that adheres to the skin to enable sensing of the user or patient. It typically incorporates multiple sensors to collect various physiological signals. Along with the sensors, there are additional components such as on board processing and memory. It also incorporates some means of communication (for example, USB or Bluetooth) to relay the collected signals out. 10 Wearable Health Tech Devices To Watch. 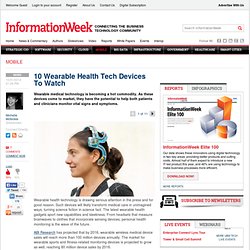 As these devices come to market, they have the potential to help both patients and clinicians monitor vital signs and symptoms. 1 of 11 Wearable health technology is drawing serious attention in the press and for good reason. Such devices will likely transform medical care in unimagined ways, turning science fiction in science fact. The latest wearable health gadgets sport new capabilities and sleekness. ABI Research has projected that by 2016, wearable wireless medical device sales will reach more than 100 million devices annually. 'Melt in the body' electronics devised. 27 September 2012Last updated at 14:00 ET By James Gallagher Health and science reporter, BBC News Water dissolving an electronic device - Courtesy Beckman Institute, University of Illinois and Tufts University Ultra-thin electronics that dissolve inside the body have been devised by scientists in the US and could be used for a range of medical roles. 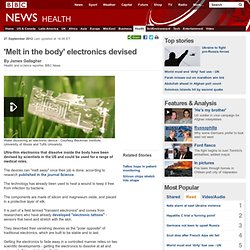 The devices can "melt away" once their job is done, according to research published in the journal Science. The technology has already been used to heat a wound to keep it free from infection by bacteria. The components are made of silicon and magnesium oxide, and placed in a protective layer of silk. Pulse: A Ring And iPhone App To Keep Track Of Your Heart. The Nike+ Fuelband is a revolution. 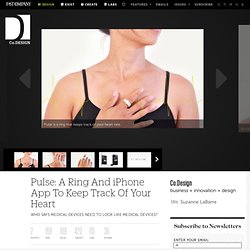 For whatever its faults, it’s a big step forward in a necessary idea: Health and wellness equipment can be a fashion statement. A pedometer is embarrassing beeper-era tech, but my Fuelband draws a small crowd. Pulse, by Electricfoxy (which is itself backed by Artefact designer Jennifer Darmour), is a concept that takes over where the Fuelband left off. 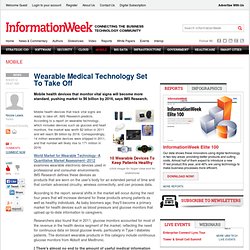 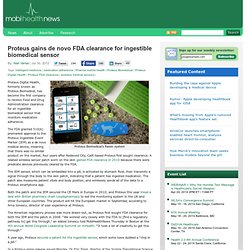 The FDA granted 510(k) premarket approval to the Proteus Ingestible Event Marker (IEM) as a de novo medical device, meaning that there was no similar product on the market, four years after Redwood City, Calif. -based Proteus first sought clearance. A related wireless sensor patch worn on the skin gained FDA clearance in 2010 because there were predicate devices previously cleared by the FDA. An iPhone App That Finds Your Keys (And Just About Anything Else)

Since Henry Ford sold the first Model T, people have been losing their car keys, cursing this pocketable tool that never seems to be in one’s pocket. Many of us have been forced to abandon our cars altogether, allowing them to rot in our yard until a decade passes and, amidst vacuuming under the cushions of our couch, we discover them amongst an extra large tub’s worth of popcorn and $100 in pennies. Now, a new Kickstarter-backed project called Hone ($49) is poised to track our keys at will. It’s an iPhone app that syncs with a Bluetooth keychain. To find your keys, you’ll simply load the app and an onscreen display will point the way in hotter/colder fashion. "Why hasn’t anyone thought of this sooner? " Simple Wristbands May Track Seizure Risk. Name:Rosalind Picard Title:Director of affective computing research, M.I.T. Media Lab Location:Cambridge, Mass. We built our first sweatband sensor to get emotional information from autistic children outside the lab.

But then one of my undergrad researchers asked if he could borrow a wristband for his little brother who had autism. These bands put a tiny current through the surface of the skin at the sweatband and measure changes in that electric current. EC-funded smart t-shirt comes to UK. 9 July 2012 Chris Thorne A ‘smart t-shirt’ that acts as a remote monitoring system for the chronically ill is to be trialled in the UK. The system, which has been developed through the Chronious project in Europe, is designed specifically for chronic obstructive pulmonary disease and chronic kidney disease patients. A light-weight t-shirt is fitted with heart, respiratory and activity monitoring sensors, that work alongside external devices such as a digital weight scale, glucometer, blood pressure monitor, spirometer and air quality sensors used in the patient’s home. All the devices are connected to a mobile device, such as a smartphone, which transmits the patient’s data to their care provider, where it can be analysed with “intelligent data processing software.”

Smart Shirt Syncs To Your iPhone, Trains You In Pilates. As the weather warms and we all realize that we’ll be removing clothing in public for another summer, pilates seems like a better and better idea. But how do you--what’s the verb I’m looking for--pilate? Pilatorize? Pilatiocize? Move, by ElectricFoxy, is a prototype tank top that uses four stretch sensors to feel the postures of your shoulders through your back and recognize the poses of exercises like yoga, pilates and even sports like baseball and golf. If you did something wrong in almost any activity, haptic feedback (vibrations) could let you know. iBGStar turns your iPhone into an FDA-approved glucose meter for $99.95.

AliveCor is turning your iPhone into an ECG  To self-diagnose, spit on an iPhone - tech - 29 November 2011. HANDHELD gadgets could one day diagnose infections at the push of a button by using the supersensitive touchscreens in today's smartphones. Feeling Sick? Spit On Your Phone To Work Out What's Wrong. Microneedle sensors may allow real-time monitoring of body chemistry.