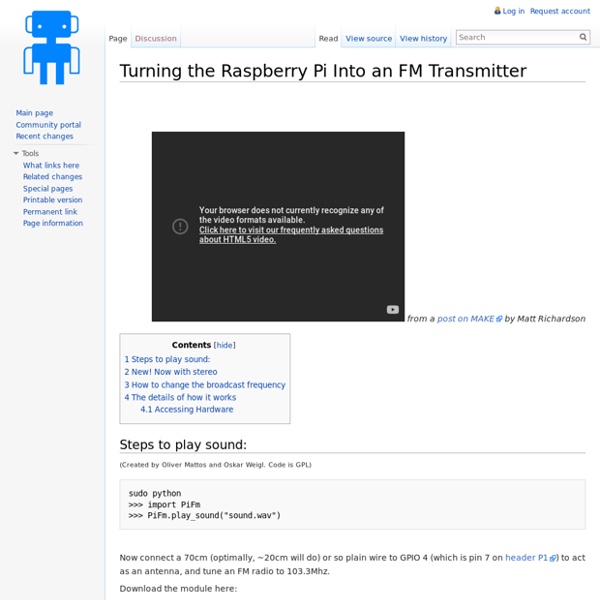 Steps to play sound: (Created by Oliver Mattos and Oskar Weigl. Code is GPL) sudo python >>> import PiFm >>> PiFm.play_sound("sound.wav") Now connect a 70cm (optimally, ~20cm will do) or so plain wire to GPIO 4 (which is pin 7 on header P1) to act as an antenna, and tune an FM radio to 103.3Mhz. Download the module here: [Download Now!] (this contains both source and a ready to go binary. New! sudo . How to change the broadcast frequency Run the . The second command line argument is the frequency to transmit on, as a number in Mhz. sudo . It will work from about 1Mhz up to 250Mhz, although the useful FM band is 88 Mhz to 108 Mhz in most countries. Most radio receivers want a signal to be an odd multiple of 0.1 MHz to work properly. The details of how it works Below is some code that was hacked together over a few hours at the Code Club pihack. If you're v. smart, you might be able to get stereo going! Accessing Hardware

RPi Low-level peripherals Back to the Hub. Hardware & Peripherals: Hardware and Hardware History. Low-level Peripherals and Expansion Boards. Screens, Cases and Other Peripherals. Electronics - Sunrise alarm clock Principle of operation This is an alarm clock simulating the sunrise, which means that a few minutes before the alarm goes off, it shines some light whose brightness increases over time. The alarm clock is built around a MSP430G2553 microcontroller compatible with the MSP430 Launchpad from Texas Instrument. It features a DCF77 module which sets the clock automatically through radio waves. The display is a character LCD module with 4 lines of 40 characters driven by a HD44780 controller.

Pi Crust breakout board makes it easy to get peripherals on Raspberry Pi Joe Walnes, a Chicago-based hacker and maker, has just released a design for what he has dubbed the Pi Crust: a very cheap new hardware add-on for the Raspberry Pi. The breakout board, which debuted on Wednesday, is meant to make it easier to tack various hardware peripherals onto the cheap computer, and it does so in an compact design. The new board only adds 2mm of height to the existing Raspberry Pi.

Raspberry Pi as an FM Transmitter This morning I was lazily browsing Reddit when I came across a project by the Imperial College Robotics Society in the UK. It’s code and instructions for using the Raspberry Pi as a low-power mono FM transmitter. When I saw how easy it looked to do, I ran over to my Pi, downloaded the code, and got it running within a matter of minutes (see video above). One of the best parts about this project is that you don’t need much hardware besides the Pi itself. PL880 hidden function you may not know these features of the tecsun radio Pl880 You may not know these features of the tecsun radio Pl880? So let me tell you. Under [ Off ] mode, press the [ AM BW ] key – the first time that full-screen symbols ; second time to display the software version number ( eg 8820 ) , LSB, this short time and then turn off the synchronous detection by LSB ) Under [ Off ] mode, press [ VF / VM ] key – Display battery life MW calibration: 1.MW transferred to any strong station 2.Open the SSB mode (USB / LSB can ) 3. Adjust the trimmer until you hear a good jog SSB signal ( that is a good tune zero beat ) 4.Press and hold SNOOZE button , you see a return correct value is displayed. 5.Press the SNOOZE button.

Camcorder CRT's aren't rocket science. - Blogs - The Vintage Computer Forums The tiny CRT in a consumer camcorder is a fantastic piece of work. I also feel they are the most unexploited video displays you can get your hands on. I always wanted to make use of the things but assumed that there was a bit more going on that you would expect. I was wrong. Give it power, give it video and it's okay.

Raspberry Pi Starter Kit - Includes Raspberry Pi! By now you've probably heard of the Raspberry Pi -- the credit card-sized computer that runs Linux. It has many of the capabilities of a traditional PC and can be used for word processing, spreadsheets, and games. It can even play high-definition video and hook up to a TV or monitor. The Pi has been called many things (cheap, small, hackable, educational), but people seem to shy away from calling it "plug and play." That's because the Pi is not a consumer device as such, even though it's pretty easy to get something up and running on you TV. That's where our Raspberry Pi Starter Kit comes in: we've sourced all the proper peripherals and add-ons to get you up and running in all sorts of maker applications.

Raspi As WSPR Transmitter Recently the Raspberry Pi (Raspi) has gained much interest in the Ham Radio community. One interesting things is: the I/O pins provide access to a clock signal (GPCLK0) and it is possible to modulate this clock signal via software. This has motivated Guido Ten Dolle (PE1NZZ) to implement a WSPR transmitter and to publish the sources under GPL.

A Review of the Bonito 1102S RadioJet 24 bit IF Receiver Bonito’s Dennis Walter at the Bonito booth in Hara Arena at the 2012 Dayton Hamvention At the Dayton Hamvention this year, I met Dennis Walter, who is with Bonito, German manufacturer of the 1102S RadioJet. Dennis was kind enough to loan us a radio for review on SWLing.com. Automatic LCD Sunglasses This week I completed a hack I’ve been working on for a few weeks. It all started with Ben Heck’s automatic sunglasses hack. He used an MCU and a photocell to flip down some shades in front of his glasses using some mini servos. Sneak Peek: Adafruit Raspberry Pi WebIDE September 19, 2012 AT 2:14 pm We love the Raspberry Pi. This tiny computer has so much potential for makers, and it is offered at an extremely reasonable price. The one thing we didn’t like about the Pi is how inaccesible it is to those who are new to Linux.

Meet FM antenna design challenges in portable devices To save this item to your list of favorite EE Times content so you can find it later in your Profile page, click the "Save It" button next to the item. Latest News Semiconductor News Blogs Message Boards Advanced Technology