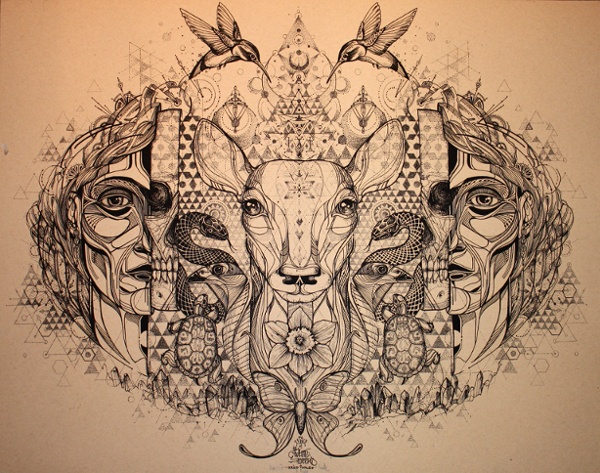 Spectacular Moleskine Doodles Explode with Energy Philippines-based illustrator Kerby Rosanes proves that doodling can be so much more than scratching unintelligible scribbles on paper. Through his Sketchy Stories blog, Rosanes shares his wonderful world of doodling in a simple Moleskine sketchbook. Equipped with an ordinary Moleskine, a few Uni Pin drawing pens, and his innate gift for drawing, the artist is able to transport viewers to a world where tiny, cartoonish creatures explode with gusto to make up larger entities. Each of the illustrator's complex and crowded sketches are filled with minute details that allow the eye to wander and discover new characters and designs at every turn. The portraits are immediately mesmerizing, but even more spectacular when looked upon closely. Rosanes says that he's on a bit of an illustration high from merging animals with his "crazy doodle monsters" but admits, "I’m liking the results of every fusion."

DIY Braided Bead Bracelet It’s been awhile since our last bracelet DIY. I don’t know about you, but our wrists have been begging for another colorful addition for months now. So after playing with some materials that were already on hand, we’ve created a tutorial for a braided bead bracelet, which is a not so distant cousin of the hex nut and wrap bracelet. Amazing Places To Experience Around The Globe (Part 1) Preachers Rock, Preikestolen, Norway Blue Caves - Zakynthos Island, Greece Skaftafeli - Iceland Plitvice Lakes – Croatia Crystalline Turquoise Lake, Jiuzhaigou National Park, China

Satiric Artworks by Pawel Kuczynski Article by James Pond I am the owner of Pondly.com / art lover / electrical engineer / software developer / MBA in e-business student. I blog for pleasure and love to share my Internet findings. Web site: Incredible and creative work by the Polish Artist. Website DIY Wrap Bracelet You should all know by now that we are all about stacking bracelets on our wrists. The more, the better. In fact . . . the most, the best! Extreme City Perspectives by Artist Fabio Giampietro Our friends over at Laughing Squid spotted some unique paintings by Milan-based artist Fabio Giampietro. His dynamic high contrast black and white paintings are oil on canvas. Most of the works shown here are from his Vertigo series and true to the name these paintings have a dizzying effect on the viewer. These cities viewed from high above are a bit reminiscent of the artist M. C. Escher and his famously extreme perspectives.

Drab to fab! 5 DIY ideas for t-shirt remakes Posted by ScrapHacker.com on tisdag, juni 5, 2012 · 5 Comments With temperatures rising so is the annual epidemic of fashion fever, making many of us feverishly hit the high street (although our wardrobes are already stuffed full…). This post celebrates the power of re-invention of a wardrobe staple – old t-shirts. Lizzy Stewart’s Charming Folk Art Inspired Illustrations Lizzy Stewart is a British illustrator who makes incredibly charming images. Inspired by Eastern European folk art and medieval painting, her drawings are wonderfully flat and full of simple shapes. Her work reminds me of some of her contemporaries like Pia Bramley and Carson Ellis, all of whom practically force a better mood on their viewer.

Stumblers Who Like Most Amazing Miniature Food Artworks by Shay Aaron Shay Aaron is a brilliant artist from Israel who makes the most astonishing miniature food jewelry. These foodstuffs look so beautiful that we would desire to eat them. Actually, there’s a whole market out there for miniature food. Not actual stuff you can eat, but beautifully hand made designs of steaks, burgers, pies, vegetables, eggs and pretty much food artworks you can think of. Comments