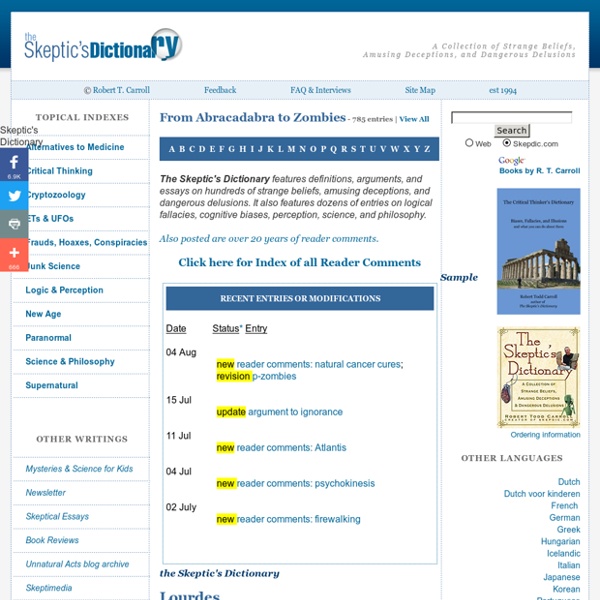 From Abracadabra to Zombies - 754 entries | View All What's New? See the most recent entries, updates, and reader comments Sample the Skeptic's Dictionary In spiritualism, a medium is one with whom spirits communicate directly. In an earlier, simpler but more dramatic age, a good medium would produce voices or apports, ring bells, float or move things across a darkened room, produce automatic writing or ectoplasm, and, in short, provide good entertainment value for the money.

Explore - Free Library Blue Sargent's entire family is psychic. Blue's only power is to amplify the abilities of others. Growing up in Henrietta, VA, Blue has a great life with her mother and other female relatives who share the big house at 300 Fox Way. But one night while helping her mother record the names of the people from Henrietta that will die in the next year she sees a boy and hears him speak his name. He is one of the "Raven Boys" who attend a local prep school for the ultra elite. Typically arrogant and privileged, the Raven Boys are despised by the residents of Henrietta.

How To Sell Magic Beans One of the eternal questions for skeptics is – how can some people be so gullible? We have a standard answer which captures many of the factors: poor understanding of science, lack of an innate sense of probability, all the various mechanisms of self-deception, and the strong desire to believe in certain things. Further, some cons are just slick, and anyone can be fooled by a clever-enough deception. But still, there are some claims that are so astoundingly gullible it’s difficult not to face-palm when confronted by them. One category of such claims is what I think of as the equivalent of magic amulets, or the magic beans from Jack and the Beanstalk.

Debating a Christian – The Atheist Handbook Email by Jeremy L. Moran, JT Eberhard, Adam Brown, and other contributors Part 1. Opening Statements. Part 2. List of Latin phrases This page lists direct English translations of common Latin phrases, such as veni, vidi, vici and et cetera. Some of the phrases are themselves translations of Greek phrases, as Greek rhetoric and literature were highly regarded in ancient Rome when Latin rhetoric and literature were still maturing. The Latin letter i can be used as either a vowel or a consonant. When used as a consonant, it is often replaced by the letter j, which was originally simply an orthographic "long i" that was used in initial positions and when it occurred between two other vowels. This convention from Medieval Latin is most commonly preserved in Latin legal terminology—hence phrases like de iure are often spelled de jure. To view all phrases on a single, lengthy document, see:

Bad Astronomy Well now, this is an interesting discovery: astronomers have found what looks like a "super-Earth" – a planet more massive than Earth but still smaller than a gas giant – orbiting a nearby star at the right distance to have liquid water on it! Given that, it might – might – be Earthlike. This is pretty cool news. We’ve found planets like this before, but not very many! And it gets niftier: the planet has at least five siblings, all of which orbit its star closer than it does. Top 20 Logical Fallacies - The Skeptics' Guide to the Universe Introduction to Argument Structure of a Logical Argument Whether we are consciously aware of it or not, our arguments all follow a certain basic structure. They begin with one or more premises, which are facts that the argument takes for granted as the starting point. Then a principle of logic is applied in order to come to a conclusion. This structure is often illustrated symbolically with the following example:

Pharyngula Probably not. But the New York Times reports: A review of studies has found that the health benefits of infant male circumcision vastly outweigh the risks involved in the procedure. Ten Virtues for the Modern Age The Virtues Project comes as a response to the wave of discussion and feedback that followed the publication of my book, Religion for Atheists, and a growing sense that being virtuous has become a strange and depressing notion, while wickedness and evil bask in a peculiar kind of glamour. My ultimate aim for the project is that it ignites a vital conversation around moral character to increase public interest in becoming more virtuous and connected as a society. In the modern world, the idea of trying to be a ‘good person’ conjures up all sorts of negative associations: of piety, solemnity, bloodlessness and sexual renunciation, as if goodness were something one would try to embrace only when other more difficult but more fulfilling avenues had been exhausted. Throughout history, societies have been interested in fostering virtues, in training us to be more virtuous, but we're one of the first generations to have zero public interest in this. 1.

Browse - TAMI Browse for Videos by Topic Not sure what you're looking for? Start out by exploring the categories below for footage from your hometown, to see what Texas looked like in the past, or check out some of your favorite Texas icons.