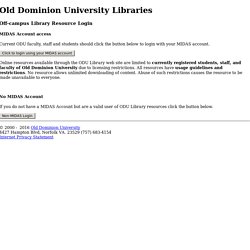 Online resources available through the ODU Library web site are limited to currently registered students, staff, and faculty of Old Dominion University due to licensing restrictions. All resources have usage guidelines and restrictions. No resource allows unlimited downloading of content. No MIDAS Account If you do not have a MIDAS Account but are a valid user of ODU Library resources click the button below.

To provide greater security, you will now be asked to enter your complete campus email address and your university identification number. MMS: Error. As vaccination rates drop, childhood diseases rise. Anti-Vaccination Movement Really Is Causing Measles Outbreaks. Most of the people infected with measles during recent outbreaks were unvaccinated, a review of 18 studies has reported. 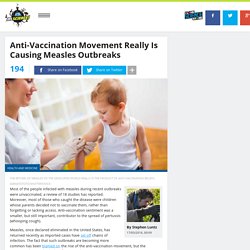 Moreover, most of those who caught the disease were children whose parents decided not to vaccinate them, rather than forgetting or lacking access. Anti-vaccination sentiment was a smaller, but still important, contributor to the spread of pertussis (whooping cough). Measles, once declared eliminated in the United States, has returned recently as imported cases have set off chains of infection.

The fact that such outbreaks are becoming more common has been blamed on the rise of the anti-vaccination movement, but the accusation has involved a lot of guesswork. A paper in the Journal of the American Medical Association has changed that. Combining nine outbreak reports and nine annual disease summaries, they analyzed 1,416 measles cases in recent years. JMIR-Social Media and the Empowering of Opponents of Medical Technologies: The Case of Anti-Vaccinationism.

Introduction Social media has been defined as “a group of Internet-based applications that…allow the creation and exchange of user generated content” []. 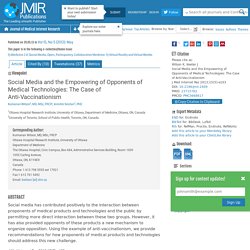 These platforms range from social networking sites such as Facebook, to content sharing sites such as YouTube and Picasa, and even to interactive virtual worlds such as Second Life and World of Warcraft. Rapidly increasing in popularity and influence, social media presents a double-edged sword for proponents of medical technologies. On one hand, social media has transformed how companies communicate with potential consumers of medical pharmaceuticals and technologies. Both consumers and producers have a range of novel communication channels available to them that can rapidly match consumer interests and needs with available products and services. However, along with these opportunities for empowering both health consumers and producers alike comes potential peril [].

What is social media’s role in all of this? ‎ View this figure. Comparing the quality of pro- and anti-vaccination online information: a content analysis of vaccination-related webpages. The Anti-Vaccination Movement. Feature Steven Novella Skeptical Inquirer Volume 31.6, November / December 2007 Despite the growing scientific consensus that vaccines are safe and that neither vaccines nor mercury cause autism, a stubborn vocal minority claims otherwise, threatening the effectiveness of this public health program. 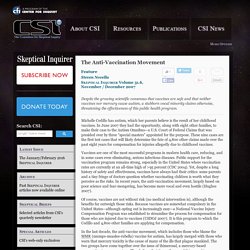 Michelle Cedillo has autism, which her parents believe is the result of her childhood vaccines. In June 2007 they had the opportunity, along with eight other families, to make their case to the Autism Omnibus—a U.S. Vaccines are one of the most successful programs in modern health care, reducing, and in some cases even eliminating, serious infectious diseases. Of course, vaccines are not without risk (no medical intervention is), although the benefits far outweigh those risks. Autism is a complex neurological disorder that typically manifests in the first few years of life and primarily involves a deficiency of typical social skills and behavior. It gets worse. Andrew Wakefield. The Anti-Vaccine Generation: How Movement Against Shots Got Its Start. You could call New Jersey Governor Chris Christie and Kentucky Senator Rand Paul members of the "vax generation. 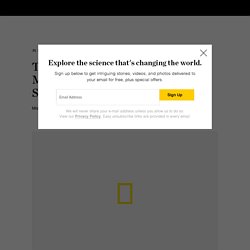 " Born in 1962 and 1963, respectively, they were in grade school when the newly developed measles vaccine became the life-saving advance that protected millions from a highly contagious childhood disease. Though not as scary as polio, it was potent enough to strike four million kids, hospitalize 48,000 of them with complications, and kill more than 400 every year. How the anti-vaccine movement is endangering lives. (Rogelio V. 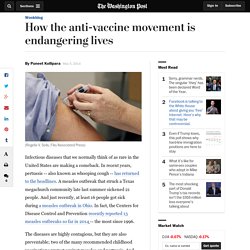 Solis, File/Associated Press) Infectious diseases that we normally think of as rare in the United States are making a comeback. In recent years, pertussis -- also known as whooping cough -- has returned to the headlines. A measles outbreak that struck a Texas megachurch community late last summer sickened 21 people. And just recently, at least 16 people got sick during a measles outbreak in Ohio. The diseases are highly contagious, but they are also preventable; two of the many recommended childhood vaccinations protect against measles and pertussis.

Why are so many outbreaks happening? But aren't overall vaccination rates really high? CDC data show that vaccination rates are now above 90 percent range for several routine vaccines, including the measles-mumps-rubella (MMR) and whooping cough vaccines. Credit: U.S. Anti-Vaxxers Are Officially To Blame For The Rise In 2 Preventable Diseases.